Nearly 2 years ago, Mark from Rome of the West took me to Kaskaskia Island and showed me Immaculate Conception.  The parish dates from 1675 and was founded by Father Marquette.  Kaskaskia Island isn't really an Island anymore.  It is on the west side of the Mississippi River.  It looks like it should be part of Missouri but it is actually part of Illinois.  Blame the Mississippi Floods, especially the Flood of 1881.  The current church building is from 1843.  After 2 floods, it was decided to move the church to its current location.  Instead of just building a new church from scratch, they rebuilt the new church using everything from the old.  The bell tower used to be in the center at the old location but is on the side.  During the Flood of 1993, flood water reached the top of the choir loft rail, 15 feet high maybe?

Immaculate Conception is only open for Mass on Saturdays at 3:30 pm and from 1-4 pm on Sundays.  If there's flooding, good luck getting there.  The nice parishoner there told me how to get there when there was minimal flooding involving levees and such but she lost me at turn off the paved road.  She was really nice and told me lots of stories about the parish and the priests and about things I shouldn't repeat but suspected.  It's really awesome when you meet someone who has been in a parish forever and whose family has been in a parish forever.  There is a great deal of oral history and stories that can't be found anywhere else.  She was telling me how the priest said to burn the Stations but someone stored them anyway.  How one of the priests was a woodworker and did a great deal of the wood working but then left the priesthood, got married and had 3 kids but still helped out.

Let's see what else...the altar stone came from Father Marquette.  The bells are named St. Joseph and St. Louis.  Oh!  The painting above the altar is from the early 1700s.  From 1750 to 1980 it was missing, aka hidden in a safe place by the Jesuits.  It was found at the St. Stanislaus Jesuit Museum and eventually returned.

It's a beautiful church and has been restored beautifully.  PS.  They need your money. 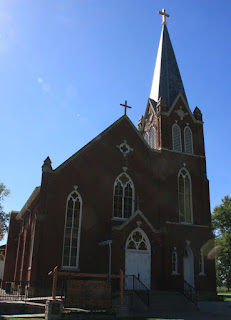 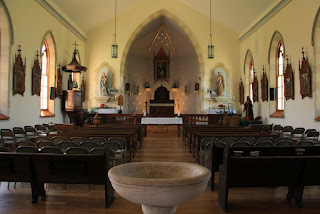 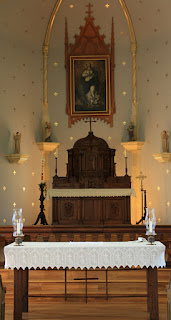 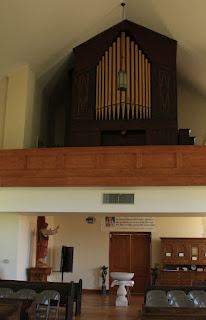 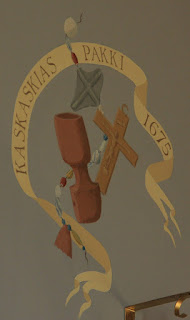 Link with some history

Posted by Tina aka Snupnjake at 9:04 PM