When I was at St. Raymond on Sunday, they has posted in the bulletin about a Melkite liturgy.  I'd never heard of such a thing so I was very intrigued.  The liturgy was Wednesday and I attended.

It was odd because initially there were only two laity there and about 30 members of the clergy.  The friend I was with was asked to take pictures of the liturgy so the plan to hide in the back pew and follow along was dashed.  It was interesting to try and figure out what to do while being in the front pews.

The Melkite Liturgy is the Divine Liturgy of St. John Chrysostom.  From what I can gather, it is a subset of the Byzantine Rite.  All the parts that are in a typical Roman or Latin-Rite Mass are there but in a different order.  It also seemed like the petitions/intentions were repeated multiple times.

I really liked going to this Liturgy.  I look at this Liturgy and the Liturgy I'm typically subjected to on Sundays and I don't see how they are related.  I can see the resemblance more in the Extraordinary Form but not in what I see on any given Sunday.  It's like the regular Sunday liturgy is watered down.

One thing that caught my attention was that none of the clergy in the pews used missals or books or papers but they all knew what to sing and were singing.  Nearly all of the Liturgy was sung or chanted. It was in a lower key too I noticed.  It was much more drone like.  It was definitely in a key most people could sing.

I think the awesomest thing was at the Communion all of the clergy in the pews suddenly put on stoles and came up around the altar and took Communion together.  When they left the sanctuary, they took the stoles off. 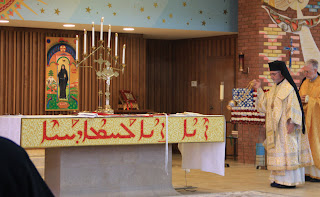 Incense!  Lots and Lots of Incense! 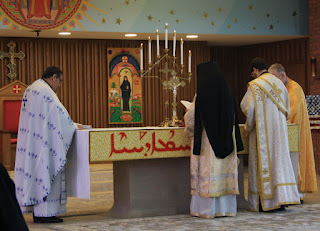 How most of the Liturgy was conducted. 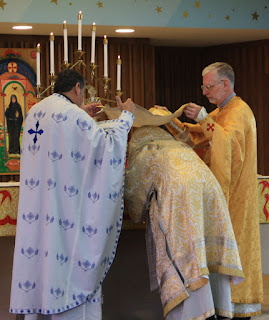 I have no idea what was going on...