The parishoners tended to be well dressed and there were padded pews.  Teenage boys acted as ushers and door guards.  The ministers of the altar wore kante cloth sashes.

Except for the altar cloths and one painting that was Afro-centric, the Church seemed to retain much of the original decor.  The only thing that bothers me was that I couldn't find a depiction of St. Elizabeth, Mother of John the Baptist.  I found Mary, St. Joseph, St. Anne, St. Martin de Porres, St. Terese with the Flowers, St. Jude, Sacred Heart of Jesus, and I think St. Anthony of Padua.  St. Engelbert was on the top of the old high altar.  St. Catherine was there too, at least I think it was her, the saint had a wheel.  I couldn't figure out the bishop on the other side.  The point is, no St. Elizabeth.

The music was provided by a largish choir and a variety of instruments.  It sounded nice and gospel-y, but the sound was muffled and it was hard to hear what they were singing.  St. Elizabeth, Mother of John the Baptist, is an older church with a huge vaulted ceiling and a choir loft.  Had the choir been in the loft, they would have been much easier to understand, as that's what they were designed for.  Also, the choir faced the side of the church, not the altar or the people.
Music:
Opening: ?
Offertory:  Lord, You Are My Light, My Joy My Salvation, Whom shall I be afraid
Communion:  Lord We Have Sinned Against You, Lord Have Mercy On Us.
Communion Meditation:  Instrumental of To Jesus Christ Our Sovereign King
Recessional:  Somebody's Knockin' At the Door

The Responsorial Psalm was supposed to be Psalm 23 or 130, but Psalm 94 was used instead.  There was also a song at the beginning of the Liturgy of the Word.

Mass started with everyone kneeling until the beginning of the Liturgy of the Word.  The full Penitential Rite was used.  And Eucharistic Prayer for Reconciliation II was used.  The Sign of Peace was a party.

Homily:
We are children of the light being called out of darkness.  The darkness is stillness, it is security and it is safety.  Most likely, the beggar prayed everyday for sight.  But when he was given the gift, his life got harder, and most likely he missed the simplicity of living in the dark.  It was the same thing with David.  He was a simple shepherd and then he had to go fight Goliath and be king.  God's gifts are free but they are not cheap.  They are rather costly.  While the beggar and Paul would never go back, they miss the darkness because it was easier.  Life gets better but not easier when we get God's Gifts (I wonder what God's return policy is...do I need a receipt?)  This is the Lesson of Scripture.  Gifts come with responsibility.  You have to share your gifts.  It is hard, confusing and it hurts sometimes to do this.  What is your gift?  (hmmm snark?)  Struggle with the commitment and responsibility that the gifts demands.  If you know and don't see through...sin is not being responsible to the Light.

There were 5-6 Elect (Hooray!) Father had the sponsors anoint the eyes of the Elect with Holy Oil.  I don't remember this being part of the Scrutinies...

Pictures:  There was an awesome window with an angel but I couldn't get the angle. 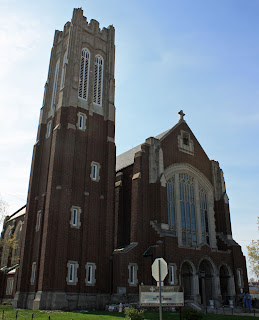 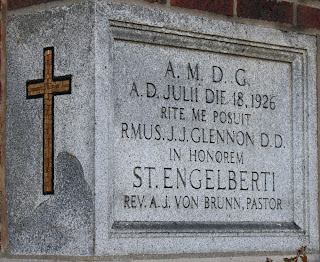 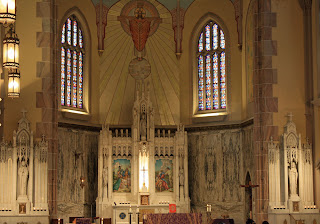 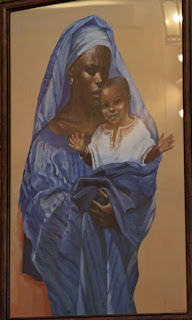 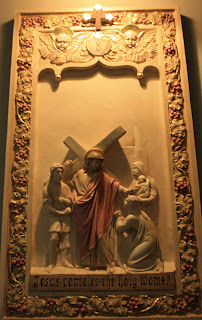 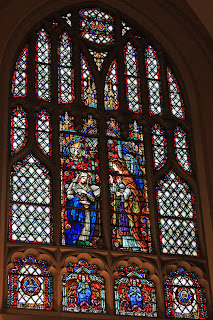 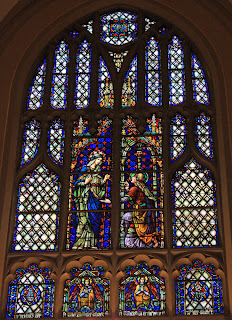 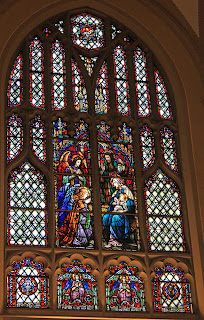 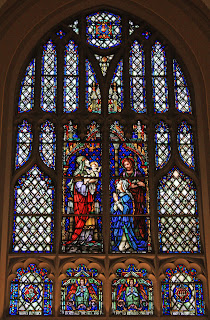 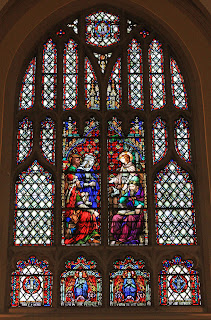 Lost & Found in the Temple 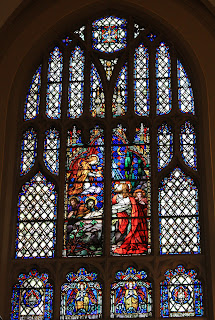 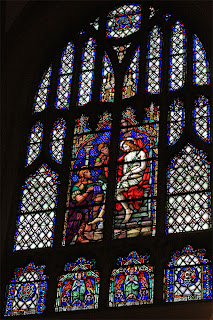 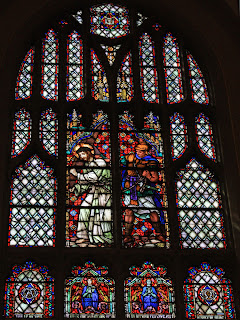 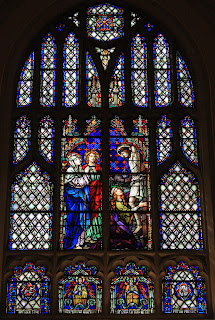 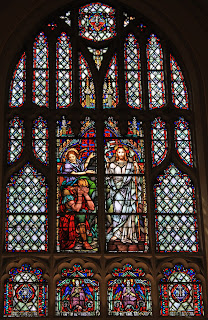 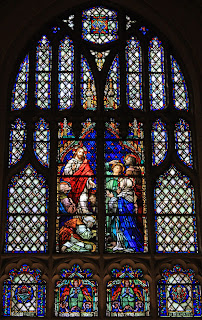 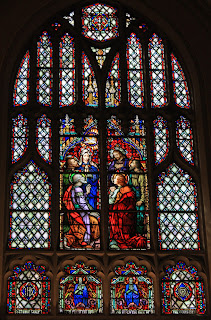 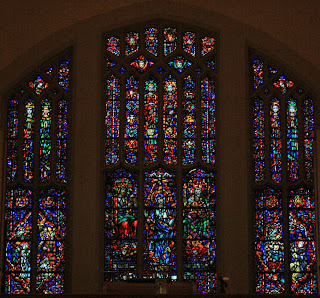 Big Window in Back
Links:
Website of St. Elizabeth, Mother of John the Baptist
Pictures from Rome of the West

Psst:  I'm looking for a Good Friday Service that is at night....and Stations of the Cross.  Help?  Comment or email?
Posted by Tina aka Snupnjake at 10:09 PM