Happy Palm Sunday!  Everyone get their palms?  I left mine in Church :/

Music:
Today's Mass was accompanied by the Guitar Ensemble with a side of piano.
Procession:  Hosanna, Blessed is He That Comes in the Name of the Lord
Entrance:  All Glory Laud and Honor
Offertory:  I Will Sing
Communion:  Now We Remain
Closing:  Were You There
Mass Setting:  Latin Sanctus and Agnus Dei
The Our Father was sung! The Prayers of the Faithful were set to background music and the responses were sung.

For the procession, the 2nd graders preparing for First Communion processed around the Church waving palms.  Father gave a homily preview about hugging God's Mystery.  Then the little kids were blessed with the Catholic Blessing Salute and sent on out.

Father's homily started off with a story when he was newly ordained comforting a grieving mother.  Father suggested praying the Hail Mary and the mother wanted a more personal prayer.  The mother wanted to touch God's Mystery.  When you embrace the mystery up close and tightly, you change.  I had to leave at this point cause I've been sick and the perfume behind me didn't help :/

Father invited the 2nd graders to stand around the altar for the Liturgy of the Eucharist.  Father used Eucharistic Prayer II and there were bells.  And hand-holding at the Our Father. 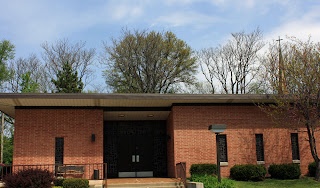 Exterior of Blessed Teresa of Calcutta 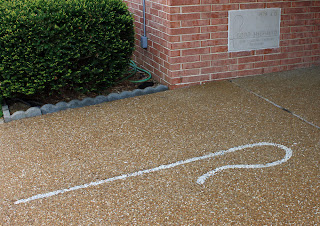 Cornerstone of the Church
Staff in the gravel. 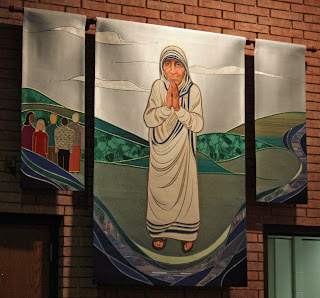 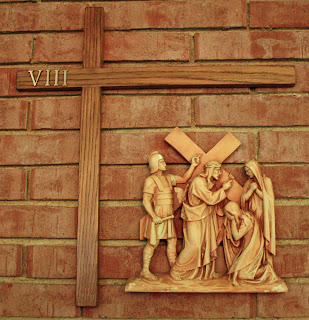 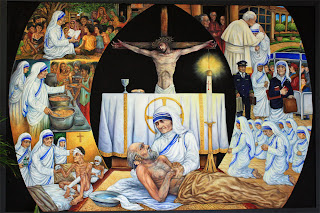 Outdoor Stations
(I had a close-up, but blogger won't upload it)
Links:
Parish Website of Blessed Teresa of Calcutta
Posted by Tina aka Snupnjake at 10:20 PM