For Holy Saturday, I was invited to the 8 pm Vigil at St. Clare of Assisi in Ellisville.

The Church is very modern.  From the inside, it looks like the inside of a clam shell, with the highest point over the Sanctuary.

When I first arrived, I was a little nervous because where the Tabernacle should be was a giant projection screen TV.  It turns out that since there was not enough room around the in-ground Baptismal Jacuzzi, the parish streamed the video to the TV so everyone could see.

The Vigil started outside with the fire.  We weren't allowed to process into a dark church with lighted candles because it wasn't safe.  The Exsultet was rather different.  The Deacon sang it and then there was a refrain that the people sang, Most Holy Night, and the choir sang some refrains as well.  For the first reading, 2 people went up to the lector.  The woman starts recounting the story of Genesis and then the man reads God's Voice.  Instead of leaving the lights all at one level, the lighting kept changing to light up certain areas at certain times.  Mood lighting.  The only other odd thing was the Litany of Saints.  It wasn't a traditional chanted litany, it was more like a song.  According to my worship aid, the tune was by John D Becker and is from 1987.  The Old Testament Prophets were added it, which I didn't think were part of the traditional one but I'm not sure.  Everything pretty much went normally after that.  A mom and her son were baptized!  5? people were received into the Catholic Church and everyone, but the baby, was Confirmed plus 2 more people.  YAY!

Father used Eucharistic Prayer III and there were no bells.

The music was accompanied by a violin and piano.
During the dressing of the Baptized:  Let's Go Down Into the River and Pray
Preparation of Gifts:  Spirit of God
Mass Setting:  Mass of the Divine Word
Lamb of God:  in Latin by Michael Joncas
Communion:  I know that My Redeemer Lives
Meditation:  Risen! Christ is Risen!
Closing:  Jesus Christ is Risen Today!

Father's homily focused on how we see the devastation from natural disaster but it also lets us see the Goodness of God as people help each other and a witness to Jesus Christ.  As St. Augustine said, We are an Easter people and Alleluia is our song.  The separation from Jesus is no longer there because He has risen.  The foundation of our Faith is tonight.  Hope.  We celebrate Christ's love.  All of our senses are touched tonight.  We go forth changed, renewed in Faith, Hope and Love.  Each and everyday is a witness to us as an Easter People.  (It was actually way more coherent...My notes are terrible and all the Masses are blurring together...) 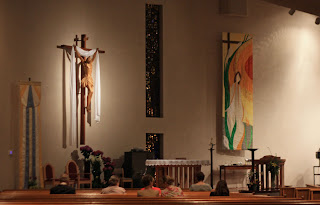 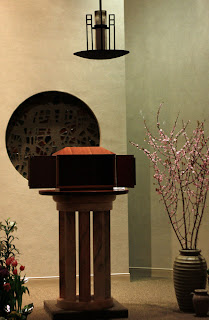 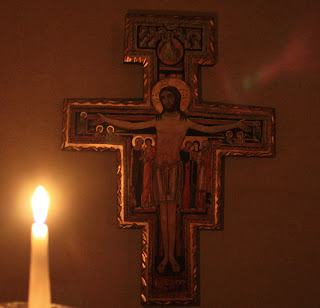 Link:
Website of St. Clare of Assisi
Posted by Tina aka Snupnjake at 10:41 PM