Tenebrae at the New Cathedral

After Mass at St. Mary Magdalen, I hurried to the New Cathedral to catch the Tenebrae Service with the seminarians chanting.  I got to the Cathedral as the Eucharistic Prayer was starting.  The Cathedral didn't have bells at the Consecration, they had this clacker noise maker thing.  During the Eucharistic Procession, one of the Fathers rattled as they walked.  I imagine it sounded much rather like a 4x4 or cross being dragged across a stone/cobblestone path....  It was striking and rather eire.

As the Altar was stripped, the choir chanted Psalm 21.  They chanted from the side.  The sanctuary was essentially empty except for the Tenebrae candle holder.

All the antiphons were sung by the schola cantorum.  For the psalms and canticles, the cantor chanted a verse, then we chanted the next verse.

So the actual Tenebrae started with Psalm 2.
The first Lesson is from Lamentations (3:1-11)
Then came Psalm 37
The second Lesson was from the catechesis of St. John Chrysostom.
Followed with Psalm 50
Then the Canticle of Habakkuk (3:2-4,13a,15-19).
Then Psalm 147
Then the canticle of Zachary (Luke 1:68-79)
The service concluded with the Our Father.

The seminarians and the cleric (?) that chanted Lamentations all did an awesome job.  It was very moving. 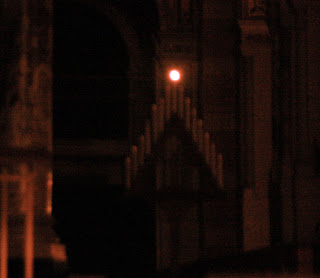 The Christ Candle
Links:
Same picture from Rome of the West
Posted by Tina aka Snupnjake at 7:22 PM