Because I've heard *rumors* I verified the time of tonight's Mass by going to the website of St. Stephen Protomartyr.  I checked the bulletin from last week.  I looked around the website.  The big wooden sign on the lawn proclaims that Saturday Vigil Mass is at 4 pm.

Update:  The plot thickens!  A parishoner of St. Stephen has graciously shared this letter she received from the pastor about the Chapel/Oratory.  Not to spread rumors, but the thinking is headed in the direction that there is no need to have a Chapel/Oratory and a Parish Church.  Guess I better whip those chapels out a little faster....

I got to Chapel about 10 minutes before 4 pm.  The place was deserted and locked up.  No signs on the door, nothing.  Thought maybe I was too early.  Then a few other people started coming one group being a family from out of town.

Why have a website with parish information if that information is not going to be accurate?  Why bother announcing what time Mass is in front of the Church if it isn't correct?    Why should I listen to anything they have to say...when they clearly aren't sharing accurate information?  It's almost as if one didn't want people to come....

It's okay though.  I didn't need to have brekkie with my mom on Mother's Day.  I will just offer it up for my poor grandmothers who are most likely in Purgatory.  It's the Catholic thing to do after all.... 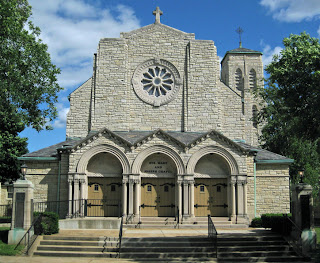 Chapel of Sts. Mary and Joseph 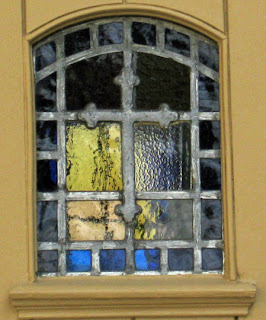 Window on a side door. 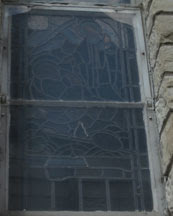 I think this is the Annunciation.
The figure on the right looks to have wings...
Links:
Pictures from Rome of the West
Don't forget to Vote for me in Best Visual Treat!!!!
Posted by Tina aka Snupnjake at 11:51 PM