For the Feast of the Most Holy Trinity, I attended the 10:30 am Mass at Holy Trinity in St. Ann.  Holy Trinity was formed 8 years ago from the merge of 3-4 parishes and is located at what was once called St. Gregory the Great.  The church building was built in 1959 and is in the shape of a Tau (basically a t without the top part.)   Although modern, there were many statues and icons.

The choir and musicians didn't use the choir loft but rather sat in the right arm of the Tau.  There was a tambourine and drums.

Music:
Opening:  How Great is Our God
Gloria:  Mass of a Joyful Heart
Offertory:  Sacred Silence
Communion:  Amazing Grace
Closing:  Mighty to Save
The Our Father was chanted.

At this Mass, there was Children's Liturgy of Crafts Word.  The children were blessed and sent out to make purple crosses.  The children returned during the Preface.

Homily:
The Trinity is the reawakening of God in us.  We are Trinitarians (why, for some reason, did I think of Star Trek when he said this?) God is so merciful that He can't be contained in one person.  God is a family of persons (wonders if there are fights over what to watch on tv) Jesus brings us to the Father.  Father then said his homily would focus on the Father, who doesn't get His own feast day.  (Uhm...I thought everyday was kind of God's feast day...) Father then quoted Scott Hahn.  It's all about the relationship with the Father, Abba in Hebrew, which means Daddy.  The Father's relationship with us is like how a father holds his daughter in his arms.  When we do His Will we win.  He's more than the Creator or Proto-Creator; Father has plans for us.  By uniting with Jesus, we become sons and daughters of God by the action of the Holy Spirit.  Mass is offered to God the Father; the Prayer of Jesus on the Cross.

Father used Eucharistic Prayer III and there were no bells.

There was hand-holding and upraised hands at the Our Father.  I'm hoping I didn't create problem when one nice lady kept trying to grab me to hold my hand and I stepped away.  I'm not really into the hand-holding thing.  I'm never into the arm raising thing.

St. Anne and Mary
Statue is dedicated to a former pastor. 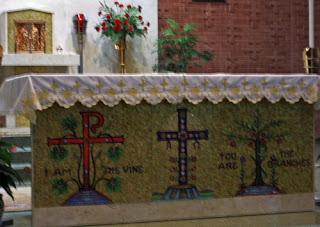 Close-Up of Altar
(Sorry it is blurry) 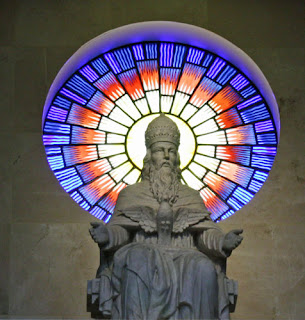 Close-Up of St. Gregory the Great
(Above the Altar) 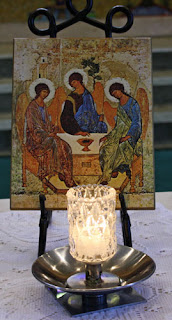 On a table in the main aisle 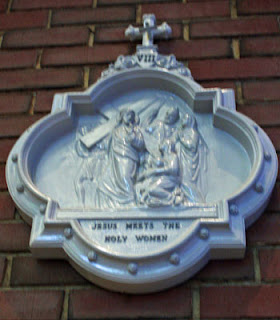 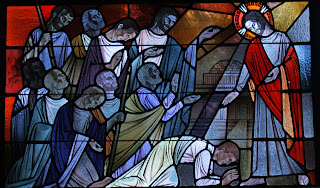 Jesus and Apostles
(I'm not sure what story this refers to) 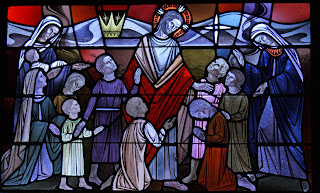 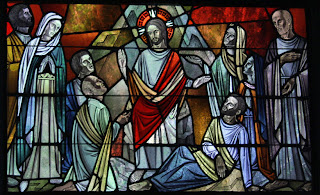 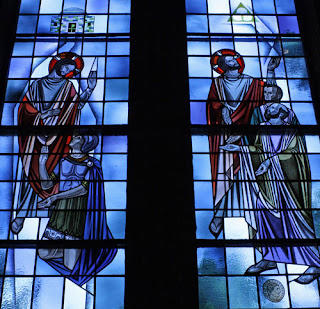 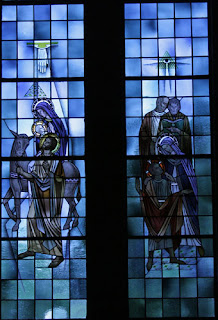 Fleeing to Egypt (left)
Jesus is found in the Temple (right) 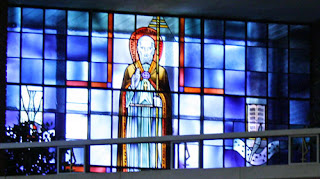 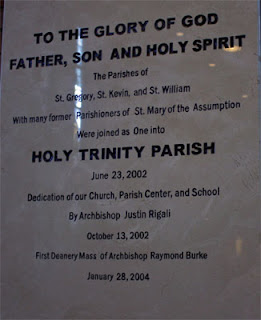 Plaque to commemorate the forming of the parish. 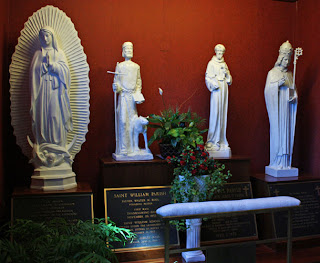 Our Lady of Guadalupe, St. William, St. Kevin, St. Gregory the Great
Shrine to the patrons of the former parishes.
I have to say, this is the nicest tribute/memorial for merged parishes I have seen.

AND! Congratulations to the 8 men ordained on May 29 for the St. Louis Archdiocese!
Posted by Tina aka Snupnjake at 11:02 PM