Hi!  Hope all the mothers who read the blog had a good Mother's Day.

I attended the 10:30 am Mass at Mary, Queen of Peace in Webster Groves on May 9, 2010.   Mary, Queen of Peace is a cross between traditional and more modern churches.  It is in the shape of an octagon, with the pews fanned out around the sanctuary.  There was lots of marble and the Communion Rail is still intact.

From the bulletin I discovered I was attending the Mass with the contemporary choir.  Mary, Queen of Peace has a handbell choir, a children's choir and an adult choir that sings more traditional music.  There is also a contemporary band that plays.  The choir was situated in the front of the Church, instead of the choir loft.  There were hand-drums and tambourines.

Before Mass, the choir sang a song about Listening to Mary, your mother and her message.  One line was "Open up your heart and let my love shine in."
The music was:
Opening:  Canticle of the Sun
Sprinkling Rite, Gloria and Mass Setting:  Mass of Glory by Canedo and Hurd
Alleluia:  Alleluia Give Glory and Honor to God
Presentation of the Gifts:  Holy is His Name by Talbot
Communion:  The Supper of the Lord and Hail Holy Queen
Recessional:  Let There Be Peace on Earth

I'm all about contemporary music at Mass and I rather like the diversity of the Church's musical tradition.  However, I'm starting to wonder if we should draw the line at music that makes me want to rock out and sway to the beat at Mass.  I was so grooving in the back pew.

The sprinkling rite made a reappearance (It is still the Easter season!).  The Penitential Rite was replaced with a really long invocation with the response of Blessed be God.  I've looked and I can't find anything about this.

Father used Eucharistic Prayer III and there were bells at the Consecration.  There was hand-holding with hands upraised at the Our Father.

Father's homily was about the Blessed Mother and three moments in her life:  the Annunciation, Visiting her cousin Elizabeth, and the Wedding at Cana.  These are prayerful moments in Mary's life.  Mary never asks for anything.  This is a great pattern of prayers for mothers, a call to sacrificial love.  Let Mary's prayer be your prayer.  Here's the situation, I trust in You.  Let it be.  The homily ended with a Hail Mary. 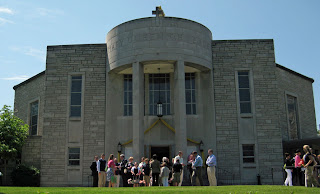 Baptistry
The font has been moved to the Sanctuary.
The window is St. John the Baptist baptizing Jesus.

St. Jude, patron of my dissertation 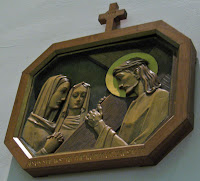 The Eighth Station:
Jesus Meets the Women of Jersulam 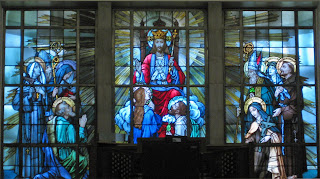 Jesus, King
Window above choir loft
St. Cecilia and St. Anne have their own windows

The Holy Family
I really like this scene, it looks so much more natural
than other images.
To the left of the altar.

First Communion Window
To the right of the altar.

Jesus and St. Peter
I'm not sure exactly what scene this is depicting.
I'm thinking the scene on the road where Peter is running
away from Rome.
Found in the stairwell on the way to the choir loft.

Jesus and children.
Found, ironically, in the cry room. 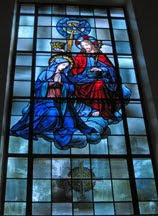 Remember!  Vote for me in Best Visual Treat!
Posted by Tina aka Snupnjake at 6:29 PM