Yes, I already went to Mass this morning.  However, every year the Catholic Newman Center (CNC) at the University of Missouri - St. Louis has an annual Thanksgiving Potluck Dinner for students.  Since I happen to be a graduate student at UM-St. Louis, I make it a point to go to the Potluck and Mass afterwards.  Father B makes the best turkey.  It's great to see the Newman Center on campus, which is rather small, filled to the brim with students experiencing fellowship (and lots of tasty food!).

The author and Sister Clementia

A Sister of the Sisters of St. Francis of the Martyr St. George 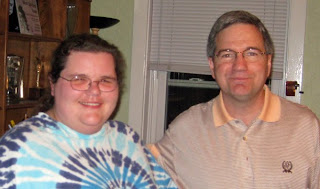 The author and Father B, Director of the CNC

(Now, quit asking for pictures of me.)

The CNC at UM-St. Louis offers Mass for students, faculty and staff (and the occasional parishioner from nearby parishes, namely St. Ann) at 8 pm in the Provincial House Chapel.  (Believe it or not that is not the latest in the Archdiocese.  St. Louis University has a 10:30 pm Mass during semester.)  The Provincial House used to be the motherhouse of the Daughters of Charity.  Now it is the Pierre Laclede Honors College and dorms for students.

Unlike other Masses, Masses at the CNC start with announcements and greeting your neighbor in the next pew.

The Responsorial Psalm was substituted for Keep Me Safe O God, which is Psalm 16.  I think the emphasis is different from what the Lectionary suggests, which has the refrain, "You Are My Inheritance O Lord"

At the beginning of Mass, after the greeting, Father B gives a Gospel question, something to think about while the readings are heard.  Tonight's Gospel Question was "What Are You doing on December 21, 2012?"  It's usually a big clue as to what the homily was about.  Father talked about how everyone is starting to freak out about the end of the world.  He points out that in Mark's Gospel, Jesus isn't all bent out of shape about the end of the world, so why should he be bent out of shape?  As Father reflected on the readings, three words popped out at him:  anticipation, awareness and trust.  Father went on to talk about how the readings today were in the apocalyptic style.  From Greek, it means to take away the veil. The readings aren't so much about the end of the world, but more about the end of the old order and the beginning of a new order.  Which I guess, if you are really entrenched in that old order, could seem like the end of the world.  The fullness of the God's kingdom is in our midst and we should be doing things instead of worrying.  (As a total aside, I really enjoy Father B's homilies.  They always seem so relevant to my life.)

The Prayers of the Faithful are done slightly differently at the CNC Masses.  Father says them (instead of a reader) and at the end, there is an opportunity to for students to add their own intentions.

The best part?  After mass there is food and fellowship!

The CNC is an awesome college Mass and had I not found the CNC (and Father B) when I needed it back in the day, I don't know if I would have come home to the Catholic Church. 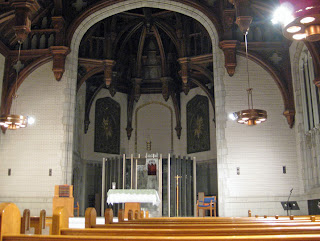 (Actually, there are pews further back, but Father discourages us from

Because this is also used as an auditorium and lecture hall,

everything must be movable and portable. 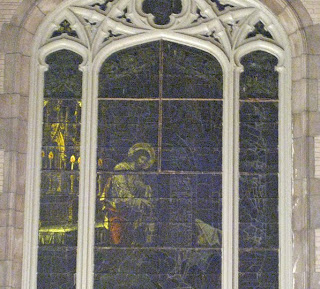 Normally, the chapel is so dark at night you can't see the windows.

Tonight, there was enough light to make Jesus glow.

The Daughters of Charity are in the process of removing the windows.

Photos of the Chapel from Rome of the West

Photos of the Newman Center from Rome of the West

In case it wasn't clear, when I'm not Church hopping around the Archdiocese, this is the "parish" I call home.  I owe them a debt of gratitude for helping me stay Catholic :)

Update:  I forgot to mention the truly awesome campus minister, Liz, who does a great job of planning and running activities.  And keeping us rowdier students inline.

Posted by Tina aka Snupnjake at 11:13 PM