Today is the Feast of All Saints, which is a normally a Holy Day of Obligation in the United States.  Since the feast day fell on a Sunday, the normal Sunday programming, er readings (has been corrected..they are called Propers) were set aside, for the readings appropriate for the Feast.

In honor of the Feast of All Saints, I went to All Saints in University City. Because today is the parish's feast day, there was only one Mass at 10 am.

My first impressions of the Church was that it was very very brown.  It was also the oddest shape I'd every seen for a Catholic Church, octagon.  Father mentioned in his homily that the windows represented the Beatitudes, which were featured in today's Gospel.  If you looked closely, you could see the Beatitude written in the window.  Underneath, it looked there may have been a Saint who represented the Beatitude depicted.  The window I sat by was "Blessed Are You Who Are Persecuted" and there was a young woman who was about to be martyred by sword depicted.

The parish was very diverse in age and ethnicity, which I think reflects well the surrounding neighborhood.  I was thinking there would be more college age or graduate students as Washington University is relatively close and many of the students live in apartments around the Church.  They must all go to the campus Newman Center.

There was a choir which sat in front and was accompanied by a piano and either an electric bass or guitar, instead of the choir loft with the organ.  (Which may have been broken..as there was a ladder leaned up against it.)  The choir and the cantor were very good and sang very well.

Entrance:  Gather Us In

Preparaton of Gifts:  Blest Are They

Going Forth:  For All the Saints

The homily was about how we are all Saints and how the Saints can inspire us no matter where we are in our life's journey, as there is a Saint for you and relevant for you.  At one point I wondered if Father had read My Life with the Saints by  Father James Martin SJ (links to his Facebook page or here is his author page), as he brought up many of the same points. (Totally awesome book and priest BTW.)  The big question was "Who are you inspiring by your holy life?"

The Prayers of the Faithful were tied to the Beatitudes.  Father used Eucharistic Prayer III and sang the preface (awesome).  There were bells at the Consecration.

After Mass while I was taking pictures, I met some of my loyal readers!! (Mary, Mike, Jimmy? YAY!!!).  We talked for while and it was totally awesome.  While we were talking, Father came up and introduced himself and stuck around to chat.  Totally cool and very friendly. 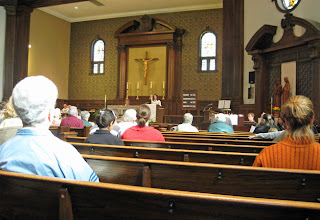 The View From The Back Pew! 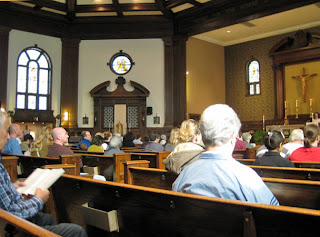 Tabernacle off to the left. 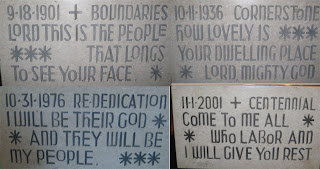 Stone thing/memorial in back of Church.

Four sided and had candle on top.

Big dates in the parish history. 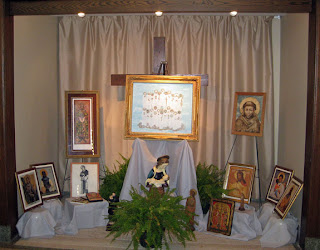 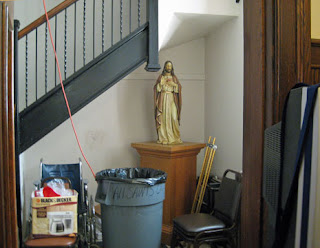 I found this statue of the Sacred Heart of Jesus in a corner.

Please put Jesus back in the Church...or make a shrine area. 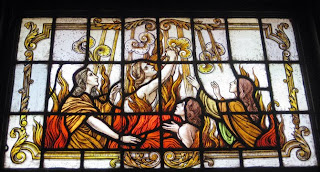 Either early Christians being burned alive for the Faith,

Parish Information from St. Louis Archdiocese (Note:  There is no longer a 6 pm Sunday Mass)

Video about All Saints' Day from Father James Martin SJ

Litany of the Saints or a cool sung version here

Posted by Tina aka Snupnjake at 4:23 PM