I was a little nervous about the interior of the Church, given that the exterior is different, with a giant steel structure that looks like either spider legs, alien legs or the claw from Toy Story.  The Church is very modern, I'm guessing built in the late 1950s.  However, the interior was very nice. It was simple and plain, but not ugly.  Mass was relatively well attended (~75% full) with a mix of various ages, including children.

Before Mass, the parish watched the Faith for the Future Seminary Campaign video.

As there was no choir loft, the choir was in the front on the right side.  The choir was accompanied by either a piano or an organ depending on the song.  The choir prayed together before Mass.

The music:
Opening:  Seek Ye First
Offertory:  We Remember
Communion:  We Will Rise Again and For the Fruits of His Creation
Closing:  Sent Forth By God's Blessing

Father's homily was probably one of the best I've heard yet.  I was a little nervous because he started talking about the sitcom "WKRP in Cincinnati"  Father mentioned that the Sunday radio programs featured ministers who preached about the end times.  Basically, we don't know what and when the end times are.  All we can control is what we do today and tomorrow; our choices essentially.  The object of Christian Life is to get up and do it a little better each day.  The homily then progressed to discuss the Mass and how it was central to our lives.  Without the Eucharist, there is no meaning to everything else.  This is because Mass is a transhistorical event, it is the beginning and end of Christian Life.    The Eucharist is the Wedding Feast of the Lamb, it is a Eschatological event.  Essentially, Mass is and should be the center of our lives as Christians.

Father said Mass incredibly reverently.  Father seems to be attempting to bring more reverence into the parish Masses.  The Confiteor was said.  Father has also set a crucifix on the altar, to simulate ad orientem worship.  Additionally, Father used Eucharistic Prayer I with accompanying gestures and bows.   The chalice was kept covered and Father cleaned up all the cups the Extraordinary Ministers of Holy Communion used. 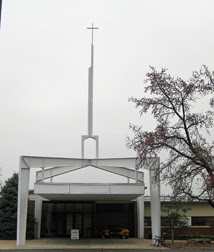 The claw, the claw is my Master.  (From Toy Story) 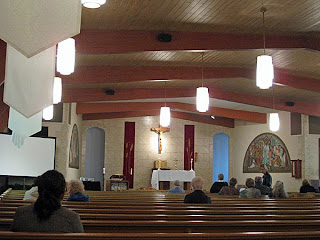 Note:  The screen was there for the seminary campaign video. 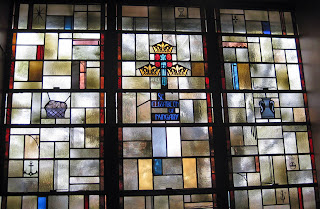 I wonder why they don't have her in the window?

All of the windows are in this style..full of symbols. 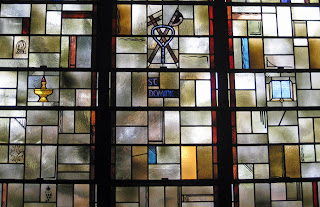 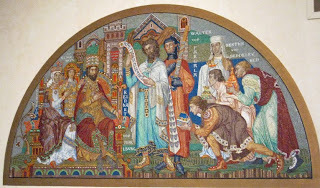 Saint Mosaic on right side of Sanctuary 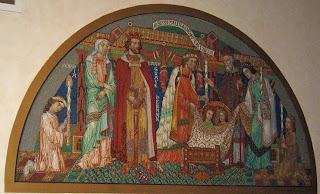 Saint mosaic on left side of Sanctuary

St. Elizabeth of Hungary Website
Posted by Tina aka Snupnjake at 2:02 PM