Today is the Feast of Christ the King and what better way to celebrate the last Sunday of the Catholic Liturgical Year then by going to Christ the King?  I had planned to go to Christ the King today in August, but two weeks ago, I found out the Archbishop was going to be at Mass.  I was hesitant to go, not because he's not a great guy (He's got 3! dogs.  How awesome is that?) but because the place would be a madhouse.  I decided to offer it up and go anyway.  I was correct in the madhouse aspect.  I got to church 15 minutes early and parking was an issue.  Normally, I've never had issues parking.  When I go in to church 10-15 minutes early, usually the choir and the musicians are the only people there.  It was half-full when I got there.  They expected so many people for Mass, they brought out folding chairs and made the choir sit in the choir loft (the horror).  According the the bulletin, Mass averages about 350 souls.  There was easily twice that.  Apparently, the way to get people to Mass, relatively on time and appropriately dressed is to have the Archbishop stop by.

The Church is of the same style as St. Michael and Sts. Mary and Joseph, narrow windows and exposed roof beams.  I think it is called Norman style.  The windows were patchwork like, simple colored panes.

The adult and children choirs sang together and I have to say the music was totally awesome.  I thought it was a good mix of older, more traditional hymns and contemporary music.  The choir was accompanied by a flute, a violin, a cello and a piano.  Lucky for me, there were programs so I could listen instead of scribbling furiously.

Music:
Before Mass:  A Jubilant Song, How Lovely Are the Messengers, For the Beauty of the Earth, One Faith One Hope One Love
Entrance:  Gather Us In
Gloria:  the one by Peter Jones, which has different refrains
Alleluia: Festival Alleluia (the one the Archdiocese had commissioned for when Pope John Paul II visited)
Preparation of the Gifts:  The Lord's My Shepherd
Mass Parts:  Community Mass
Lamb of God:  was in Latin! from Mass for John Carroll
Communion:  The Communion Antiphon: Ave Verum (wow) and Draw Near! and E'en So Lord Jesus, Quickly Come
Recessional:  To Jesus Christ, Our Sovereign King (with Christus vincit, Christus regnat, Christus imperat tacked on the end)

The Archbishop gave an awesome homily.  He basically spoke about what is kingdom and how Jesus had a different view of kingdom than Pilate.  The real power is openness to love unselfishly.  We live in an age of bumper sticker sayings.  Instead of listening, we are thinking about what we are going to say next.  There is a lack of civility.  He also mentioned Irish Alzheimer's, being mad at someone and not remembering why.  We should pray for that person instead and even apologize.

The Archbishop used Eucharistic Prayer III and there were bells at the Consecration.

I have to say it was a very nice Mass however, it just seemed really loud because there were so many people.  For instance, at one part, the congregation needed to turn a page, you could literally hear everyone turn the pages.

Bell Tower of Christ the King

I don't think I've seen a sculpture on a tower before. 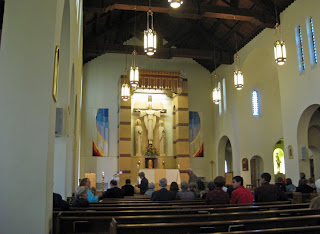 View From Back Pew! 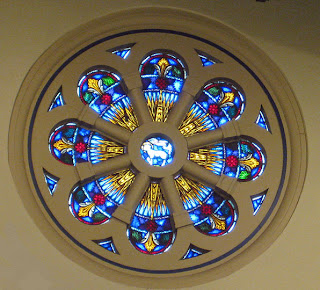 Lamb of God Window in the back 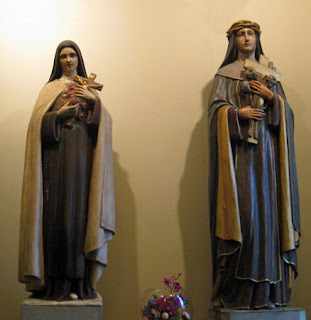 (A nod to St. Patrick parish which was merged into Christ the King) 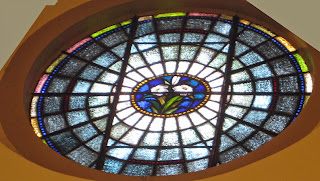 Yes I did some photoshop work.

I draw the line at setting up my tripod on the altar. 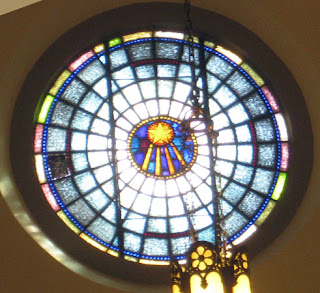 Posted by Tina aka Snupnjake at 4:33 PM