September 29 is the Feast of the Archangels, (St. Michael, St. Gabriel, and St. Raphael), I decided to go to St. Michael the Archangel in Shrewsbury.  I attended the 11 am Mass on September 27, 2009.

The church of St. Michael greatly resembles Sts. Mary and Joseph in South St. Louis City, except more decorated.  What was odd, was that the top row of window was glass blocks.

There was a choir accompanied by a piano.  Instead of using the choir loft, the choir was positioned in front of the tabernacle.  The songs for the morning were:

Opening:  Gather Us In

Offertory: They'll Know We Are Christians

Communion:  We Are Many Parts and Let Us Break Bread Together

Closing:  We Are Called

The homily was discussed the meaning of prophet, "one who speaks on behalf of God." In essence, we are all prophets.  God and the Church's Teaching Authority give us a sense of Truth, so we can tell whose the right kind of prophet.  There was also a call for stewardship.

Father ad lib the Eucharistic Prayer II in 2 spots.  Once before the consecration, and once after the part where we prayer for the Pope and our Archbishop.  He then said "...here we pause to remember living people..."  uhm.  The Our Father was sung.

There were three servers, who knelt in front of the altar for the Eucharistic Prayer.  Normally I see them on the side.  What was surprising is given that there were 3 servers, no bells were rang at the Consecration..

Oh and there was no mention of the upcoming feast day. 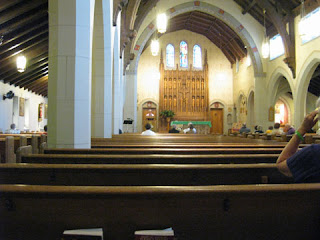 (The Tabernacle is front left, in case you're wondering.) 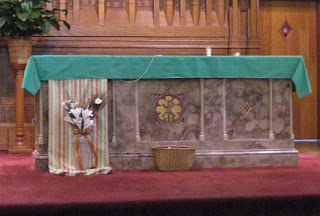 (What liturgical season is striped?)

More pictures at Rome of the West

Defend Us in battle.

Be our safeguard against the wickedness and snares of the devil.

May God rebuke him, we humbly pray;

and do Thou, O Prince of the Heavenly Host

by the power of God,

cast into hell Satan and all the evil spirits,

who roam the world

seeking the ruin of souls.

Posted by Tina aka Snupnjake at 7:12 PM