Good Evening! This morning I attended the 10 am Mass at St. Bridget in Pacific.  It's a medium, modern church built in 1961.  It is very plain and very dark inside.

There were no pew cards with the new translation and my pew didn't have a missalette.

Although the church has a choir loft, the piano and singers were located in the front on the left.  The music:
Opening:  Anthem
Offertory:  One Bread, One Body
Communion:  You Are Mine
Closing:  City of God

Father must have had something to do after Mass.  The Gospel was read so fast I couldn't tell you which one it was.  Mass was on track to be 40 minutes.  It would have been had there not been 2 speakers and the liturgy of the announcements.  That took ~6 minutes.  All the mass parts (Gloria, Sanctus, etc) were sung, Father just spoke so fast.  The Eucharistic Prayer was III and there were no bells.

As you can see from the picture below, St. Bridget has 3 aisles.  During the homily, Father power-walked down the left aisle and up, down the center aisle and up, down the right aisle and up all through out the homily.  I was totally rattled by it.  Father said we should give ourselves up for Christ.  At Peter's house..some stuff happened, I couldn't understand what Father was saying, but then Father said something about a women who had just died and the men expecting her as newly risen to serve them and everyone laughed but me who was offended...  We are at Mass to recharge our batteries.  We are a people of hope.  Carry on get on with depression.  Use hope to show other people what we believe.  Bring others over to him.  Feed Him.  The last words of the homily were the Body and Blood of Christ.

Today is also World Day for Consecrated Life.  A Sister of St. Joseph, who happened to be an alumni of the school, came and gave a little talk about vocations.  At least she said she was a religious sister.  It's not like she wore any outward sign of her vocation.  She had 3 pieces of advice:

She then related a story about her father.  When she told her father she was a going to be a sister, her father said "What a waste of a find good woman."  Everyone, but the stick in the mud in the back pew, laughed.  I thought it was slightly offensive and creepy.  And apparently nuns bring holy cards and she brought some.

I have to say, a former classmate of mine grew up in this parish.  He is now a rabid passionate atheist. 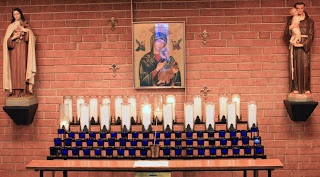 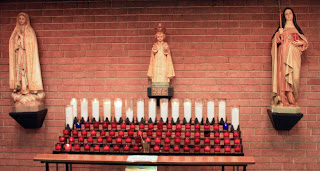 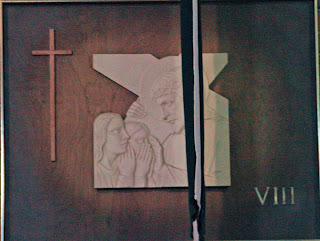 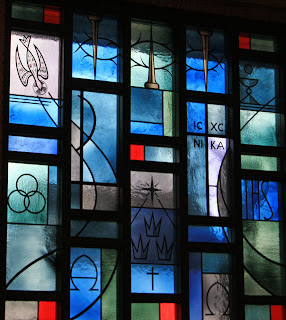 Window in the Sanctuary

Links:
Information from the Archdiocese
Pictures from the Rome of the West
Posted by Tina aka Snupnjake at 6:03 PM