Happy Catholic Schools Week!!!!  I'm glad I went to 12 years of Catholic School!  It is the duty of all Catholics to support Catholic Education, which means I better get back to eating pancakes ;)

To celebrate Catholic Schools Week, I went to St. Elizabeth Ann Seton in St. Charles, who did much for Catholic Education in America.

St. Elizabeth Ann Seton is a modern church, built in 1991 and refreshed in 2010.  I think they are still working on it as there are no Stations of the Cross, but a space for them is set aside.  It looks rather like a bunker from the outside...  The interior is rather plain and there is a lack of statues and windows.  The windows that were there were blue glass and are about the size of the openings in pillboxes.

The various liturgical ministers all wore necklaces so that you would know who they were and what they were going to do.  The priest, excuse me, the presider, did not wear one.  How am I supposed to know who the priest is and what he does if he doesn't wear a special necklace to identify him???

At the beginning of Mass, someone read the message of the day.  The message for today is Hope.

The choir and a full band (viola, keyboard, violin, flute, clarinet, drums, etc) provided the music for Mass.
The music:
Opening:  Table of Plenty
Offertory:  Beatitudes
Communion:  Prayer of St. Francis; Open My Eyes
Closing:  Our God is Here
The Gloria was the clappy Calypso one.  I'm not sure it is a kosher Gloria cause the words are all changed around, that and any song that makes me want to bust a move at Mass is suspect.  I did notice a lack of full, active participation by the people in the pews.  Only the preschoolers were clapping...  I think the rest of the Mass came from this setting.

The Responsorial Psalm was Praise the Lord My Soul.  It wasn't the preferred Psalm or one of the common psalms listed as a replacement.

Father started off Mass talking about something which was really difficult to hear/understand.  I did catch  "God shows mercy to the merciful"  Uh.  If that's true, I'm screwed.  I thought God's mercy had no conditions and was infinite.  I could be wrong.

Mass was very, very, very long.
First, there was the blessing and singing of the sending song for the Children's Liturgy of the Word.  I'm always amazed by the different age ranges for the CLoW.  After the homily, the RCIA candidates were sent out (with a sending song) to do RCIA.  Then the Second Graders had to make their First Communion Promises.  I did enjoy how one of them was to cooperate for the parents.  I also enjoyed watching a few families with 2nd graders sneak out around Communion time...  Then because it is Catholic Schools Week, someone came up and talked about Catholic Schools, specifically St. Elizabeth-St. Robert Regional School.  The school was a strategic plan to improve Catholic Identity through emphasis on liturgy.  The children are being introduced to Eucharistic Adoration this year.  Funny, when I went to Catholic grade school, we had Eucharistic Adoration and the kindergartners attended...  Then, the new Parish Council members were commissioned.  Then the old Parish Council were thanked.  Then the Vocation Chalices were sent with the new families.

Father started off his homily with a joke.  A college student was rushing around campus and ran into the campus priest.  She asked Father to pray for her at 4 pm.  Father asked why the wait?  The student said she had a chem exam at 3 and wanted to try the first hour on her own.  Father said we can do nothing of value on our own.  Genuine happiness comes from complete trust in God.  Father then redid the Beatitudes and expanded them, emphasizing trust in God.  Finally, Father mention 10 of something words in the English language.  The most revered was mother, the most tragic - death, the most redemptive - faith, the most sad - forgotten, etc.  I wish I could have heard the whole thing.

There were no bells.  The Eucharistic Prayer is unknown.  After the Sanctus, it started "Father we acknowledge" , it then talked about Jesus being conceived by the Holy Spirit, and something about the prisoner's freedom.  Another line was "Father, we celebrate the glory of his redemption" 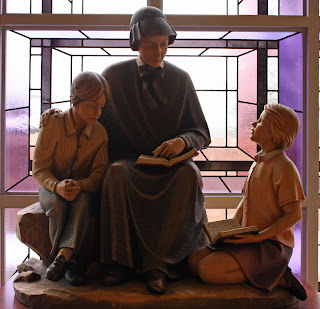 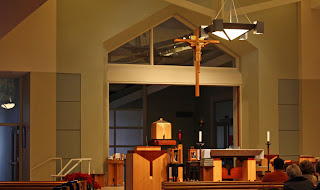 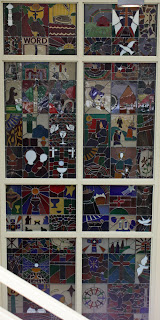