For the Feast of  Mary, Mother of God, which is sometimes a Holy Day of Obligation and sometimes it isn't.  Apparently, the Bishops think we are all party too much or something to make Mass on January 1. If you ask me, it is more confusing trying to determine when I have to go to Mass and when I don't.  I tend to like my Catholicism simple and to the point, in other words, I like the rules to be unambiguous.

Music was accompanied by the organ.
Opening:  skipped (and the antiphon was skipped as well)
Offertory:  Prayer of St. Francis
Communion:  Hail Mary: Gentle Woman
Closing: Sing of Mary

Mass was very regimented reverence.  I'm not sure who said Mass.  Father had a purple zuchetto on and the deacon brought over the Book of Gospels for him to kiss.  When the Deacon was blessed to say the Gospel, Father remained sitting and the Deacon kneeled.  In Eucharistic Prayer III, where the priest prayers for the Pope and the Archbishop, Father said "Me, Your humble servant."  I didn't recognize Father as one of our Bishops so I'm rather curious as to why the change.  There was incense and bells at the Consecration (and incense at the Elevation!)

The homily started off talking about how the liturgy draws us to Jesus Christ, especially the mystery of His Incarnation.  The focus is on the mystery.  Jesus becomes like us in all things except sin.  Attention is also paid to Mary, the co-star of the season.  Today we celebrate 1 of the 4 dogmas of Mary, that Mary is the Mother of God.  It comes from a 5th century council, Ephesus, which was to combat a heresy about Jesus not being both fully human and fully divine.  Since Mary is the Mother of Jesus, who is both human and divine, Mary is the Mother of God.  At the foot of the Cross, Jesus gave his Mother to John.  In this case, Mary stands for the Church.  Mary is our Mother via adoption.  Entrust this year to the loving care of Mary. 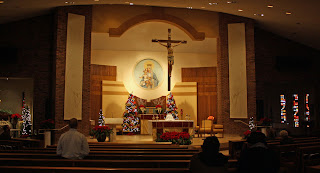 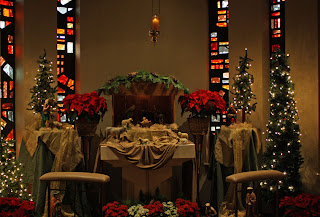 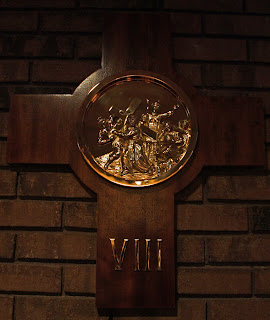 Link:
Website of Queen of All Saints
Posted by Tina aka Snupnjake at 7:33 PM