I wanted to see eagles so I headed west along the Arkansas River.  I was told a place called "Toad Suck" had a flock (it didn't and it sucked :p) which led me to St. Joseph in Conway.  I went to the 8 am Mass.

As usual with any church built after 1965, entrance doors to the church can be tricky to find.  I follow some people in and am in an old church where the side wall has been knocked down.  I'm standing there in a big gathering space of what used to be the nave of a church built in 1925.  A classic old baptismal font is in the center.  I see the old choir loft and the old windows.  There's glass doors leading to a much smaller church which is apparently a Eucharistic Adoration Chapel (at this point I'm not sure.) I'm standing there trying to determine what on Earth they have done to this church.  It looked so pretty from the outside..

A woman comes up to me and asks me in a not friendly tone if she can help me with anything.  I'm immediately on guard.  I respond I'm just looking.  She notices the camera (which is a dSLR with a decent size lens) and starts telling me I can't take pictures here, there, in there, over there and there.  I think she might have asked if I have permission.  (I can't remember because I'm paying attention to where she's pointing) I can try to take some over there after Mass but there's another Mass (in a tone that makes it sound like there's only 10 minutes between Masses).  She's wearing a sweatshirt, jeans and a tennis shoes so I figure she is just a nosy parishoner.  She has no name tag, cross necklace, nothing that would associate her with any kind of leadership role in this parish.  I take some pictures in the gathering space and take some pictures through the glass into the chapel (I didn't go in ;) ).

I go into the Church proper (a giant square), also known as the nave.  I'm in the way back and there's a good 5-6 feet between the wall and the back row of pews.  Some would consider this a vestibule.  I take a quick shot of the interior.  A man claiming to be an usher runs up to me and starts telling me I can't take pictures because I'm disturbing everyone.  (Because making a scene isn't disturbing...).  I roll my eyes and am like whatever.

Mass starts.  I'm aggravated because they have wrecked this church and there are no windows into the nave.  I'm also short on sleep and not feeling well.  The woman and the man start talking right behind me in that space between the wall and the pews.  I turn around and tsk at them ( a little louder than I should have I admit)  (Oh I just pour fuel onto fires...) The woman flies up to me, asks me what the problem is and I'm like you are disturbing my prayer.  (you know people don't like it when they get their justifications thrown back at them...) She announces that she is the sacristan and she can talk to the usher in the back because that's her job (gathering space all full up?  Sacristy all full up?  Secondary cry room?).  If I have a problem with it I can leave or find another pew.  (Tempted...so tempted...but I'm like what are they trying to hide?)  She then proceeds to ask me who I am and who I am with and if I have permission.  I'm Tina.  She's like who are you with.  Uh the Catholic Church?  No.  Who are you with?  Who's camera is that?  I'm with myself and it's my camera.  Are you with Arkansas Catholic?  Uh..no? (I don't know what that is...) You can't take pictures any more.  You can't take pictures in the sanctuary.  (Honey, I'm not in the sanctuary which makes me question your sacristan credentials.  I almost always stay out the sanctuary esp. if there is a Communion Rail.)    She and the usher proceed to stand behind me and watch me throughout the Mass.  (I feel special...)  Now I tend to want to take pictures before Mass because the lights are on and I'm not being rushed by people trying to lock up the Church.  And as I suspected the lights were turned off 5 minutes after Mass.  Also I like taking pictures before Mass so I can retake any bad shots after Mass.

This all could have been avoided if she had introduced herself and I had put the camera in my backpack when I came in.  If she would have identified herself as Hi/Good Morning I'm Mary the Sacristan/Greeter/Founding Parish Member/Parish Gopher Welcome to St. Joseph.  You don't look familiar, are you new/visiting?  And then I would have given her my bit about going around taking pictures.  and it would have all worked out (at least that is what 20+ hours of training at work is telling me...)  I did apologize to Father after Mass.  He wanted me to apologize to her.  Yeah.  no.  Let's not fan the flames.  (I'm also sure part of the problem is that I don't belong to the socio-economic class of the parishoners...$50 for an all you can eat fish fry dinner..(no mention of alcohol...).  with raffle tickets to win guns..sweet Lord...the South...)

As the new Church is a square with an arch in the center, there's no choir loft.  The choir and organ were on the ambo side.  There was a small choir.
Opening:  When Jesus Comes to be Baptized
Offertory:  Come to the Water and Abba! Father (if necessary)
Communion:  Bread of Life and Let Us Break Bread Together (if necessary)
Closing:  Sing of the Lord's Goodness

Because it is the Feast of the Lord's Baptism, Father had us renew our Baptismal Promises (just the first 3...rejecting Satan and all that bad stuff and believing in God) and sprinkled us all with holy water.  (this was unexpected...pleasantly unexpected.  It's so refreshing when a Catholic church does something well...Catholic)

The homily was given by the Deacon.
Where has Jesus been all this time? The last time we hear from Jesus he is 12 and in the Temple.  We assume that for 18 years he has been in Nazareth being obedient, being a carpenter.  John is teaching repentance and baptizing.  When Jesus comes, John wants him to baptize him.  But Jesus insists on John baptizing him.  Why does Jesus want to be baptized?  Mom (Mary) wanted it.  (I'm having flashbacks to grade school....)  The Jewish recognize Baptism.  (Uh...) They recognize that it is not for them because they are the Chosen People and have no sin to wash away.  Jesus is baptized as a way to identify with the very people he was meant to save.  Pope Francis recently said to a group of priests that a shepherd should have the smell of his sheep (please not Axe...)  Today we know the Trinity is in full bloom.  The Jews recognize that they are looking at the Messiah.  The throne is the cross.  Jesus is our Savior and our Suffering Servant.  Our baptism cleansed us of original sin.  We are now part of the Body of Christ and receive the Holy Spirit.  We are anointed with the Chrism of Salvation.  Most of us were baptized as infants.  We didn't ask to be baptized.  Our parents chose that and are responsible for raising their children in the Faith.  During the Rite, we ask the parents and the godparents many times if they are sure and if they are going to take on the responsibility (Uhm...I need to check on mine...).  As parents, we have to know our Faith.  At Baptism, we begin our journey.  We die to self.  That sounds very Christianese...let me put it another way.  We are faithful to the Mission.  Deacon gave various examples.  He is amazed at the love of this parish (no I can't...it's just too easy...)

At the offertory, Father got out a big basket and all the children came up and donated.  Father used Eucharistic Prayer III and there were bells.  There was the Liturgy of Announcements and the Liturgy of Thanking.

One last thought.  Elizabeth Scalia mentions how Catholics "do not throw people away"  But sometimes we treat them so badly...

Pictures:  As you can imagine, these are not my best effort. 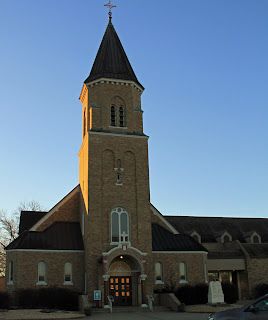 St. Joseph - Conway
This is the old entrance.


The next 6 pictures, the windows, are all found in the large gathering space.  Not in the Church Nave. 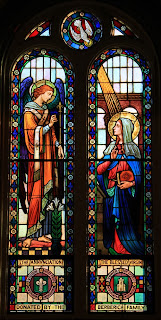 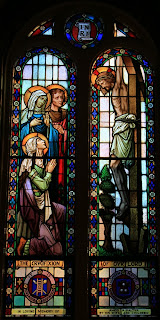 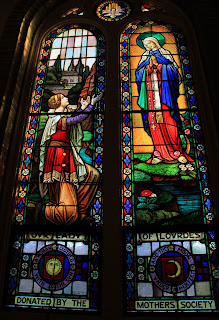 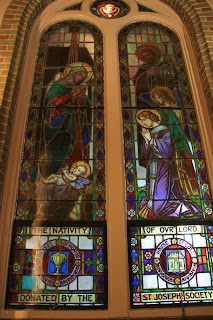 These were outside the doors to the restroom.
That's why they are keystoned so badly. 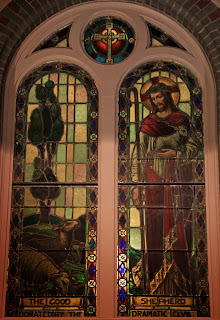 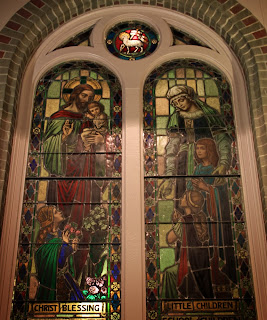 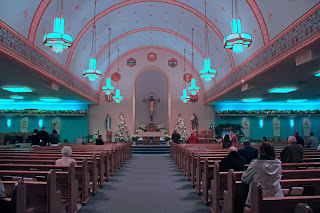 It's not really blue...it's the mixed lighting.
My camera can't handle it. 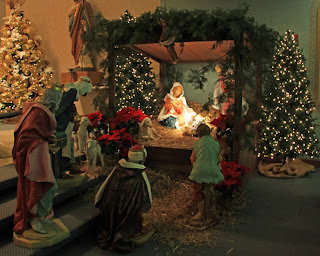