Good Sunday to everyone!
This morning I attended the 10 am Mass at St. John in Russellville which is about 1.5 hours west of Little Rock.

St. John is in an area that has experienced rapid growth.  There's the newer church which is bigger and almost overflowing today and the old church which has been turned into a Blessed Sacrament Chapel.  I'm not sure which St. John the parish is named after.  In the Blessed Sacrament Chapel you have the Crucifixion with Mary and St. John and in the narthex of the new Church you have a statue of St. John the Baptist.

Today starts National Catholic Schools Week.  Catholic schools are supposed to be more than an alternative to public schools.  It's a place where kids can learn and live their Faith.  Support your Catholic school, even if it means buying candy, cookies, popcorn, raffle tickets, etc etc.  In honor of National Catholic Schools Week, the choir was made up of kids from the school.  They were accompanied by a piano and did a lovely job.
Music:
Opening:  Enter the Journey
Offertory:  The Cry of the Poor
Communion:  Only This I Want and a 2nd song "Bread of Life, Cup of Love..."
Closing:  They'll Know We are Christians

Father's mini-homily:
Catholic Schools Week...Pray that we reach our goals with the school (I hope staying open is on the list).  St. Paul challenges us.  Do not cause division; be united.  We are the Body of Christ.  There was division in the early Church.  Allegiance to different apostles.  Christ was not divided.

Father is not a native speaker of English and has a rather strong accent.  I'm guessing this has caused problems as his homily was handed out before Mass.  (I didn't have any problems really, then again, I was taught physics by non-native speakers and I'm living in the South...where they all speak different y'all know what I mean?)  He did go off script some and you'll be able to tell when.

This is the background to the First Reading which will help us to understand it better.  Isaiah is speaking about the hope of deliverance of Israel's northern territories, Zebulun and Naphtali, which were conquered and settled by the Assyrians in 733 B. C.  The Prophet speaks in hope about the rise to power of King Hezekiah, a new ruler, who will try to restore the boundaries of Israel to match that of King David's time.  Th yoke, pole and rod, as we heard in the reading, are symbols of Assyrian oppression, the "day of Midian" refers to a battle that the Israelites won through God's power.  (cf Judges 7:15)  It is clear to us now that all people, not only the Jews, walked in darkness, but now through Jesus, the Light of the World, all people can know God intimately and experience the joy and peace of eternal life.  We also know the promises were not fulfilled.  They were only fulfilled in Jesus Christ.

In the Second Reading Paul addressed the question of factionalism that exists in the Corinthian community.  His remedy is clearly stated:  have no divisions and be united.  The Christian life is based on the message of the Cross, which they heard when Paul preached the Gospel to them.  That message led them to baptism.  In baptism, they are made members of the one body of Christ and become brothers and sisters to one another.  This is why divisions and factions are so scandalous to Paul; they reveal spiritual immaturity and threaten the spread of the Gospel.  The key thing for Paul is preaching the Gospel, because it is hearing the Gospel that people come to a saving knowledge of Jesus Christ.  The cross teaches us true wisdom and provides the example par excellence for serving one another.  In every community this problem arises.  It has a bad effect when we can't spread the Gospel.  In 1054 (drop the filoque!) and the Protestant Reformation we were divided.  We can't bear true witness.  We can come close but we will always be divided.  The moral applications and implications is what has us divided.  This division can happen here at St. John.  Social media makes it worse.  Twitter, we go around tweeting like little birds about unimportant things.  Facebook, put it out there first and gossip.  (So you're telling me all those priests and that Pope guy...I should just unfriend them?) They destroy community (It can...I'm amazed at how fast I've been unfriended sometimes but I'm also amazed at the community as well)  Respect ways of Jesus.  Do not cause division.  Baptism makes us united.  Christ is the head, we are the members.  Be united.  Love one another.  We are to be fishers of men.  Not to be served, but to serve.  We must follow Jesus.  We must be united.

In the Gospel, Matthew compares the arrival of Jesus on the scene to the coming of a great light to a people who had been living in deep darkness.  He saw Jesus as fulfilling the great prophecy of Isaiah: "The people that lived in darkness have seen a great light; on those who dwell in the land and the shadow of death a light has dawned."  (the people in darkness, have seen a great light..Let us build the city of God...oops sorry) Jesus described his mission in similar terms when He said:  "I am the Light of the World." (...may our light shine before that they may come to worship with us and give glory...ooops...).

Brothers and sisters (pump up the volume...), History is littered with examples of teachers who brought darkness into the world through their teachings (name names please...Margaret Sanger?  anyone else?)  The teaching of Jesus was truly a source to all who accepted Him, even to those who oppose him.  He is the light of the world.  He said, "Love your enemies and pray for those who persecute you." Thus He rejected the darkness of revenge, and brought the light of forgiveness and reconciliation.  This is very important in every family and community.  In the parable of the Good Samaritan, He rejected the darkness of neglect and indifference and urged people to care for one another.  In His teaching on authority He rejected the darkness of domination and oppression and urged those in positions of leadership not to lord it over the people, but to server them in gentleness and humility.  Leaders tell our members instead of showing leadership.  He rules by oppressing.  (I'm not sure who he's referring too)  We talk about the prime minister (Father must be from a former Commonwealth) means first servant.  Ministers are to serve (which is why we don't have in the US government system...)  You write letters to them and they ignore you (Good to see that's the same the world over)  This is not in the Light of the Lord.  (I'm pretty sure the Light of the Lord is being hidden under a bushel basket in DC...).  But it was above all through His deeds and encounters with people that His luminous goodness manifested itself.  How many people came to Him in darkness and went away bathed in light.  The examples of such encounters abound in the Gospels.  In Matthew there is the tax collector and then there is Zaccihus.  He pays back 4x, this is the Light of Christ.  That is our challenge.  The Light should change us and not just be lip service.  Fed by water, fed by the light, we must radiate that light (this little light of mine... I seem to be in a musical mood...)

By rising from the dead He scattered the darkness of death, and promised all who follow Him that they will never walk in darkness but will always have the light of life.  How dark the world would have remained if the Light of Christ had never shone!  And yet through Jesus brought God's Light into the world, not everybody welcomed it.  Sadly, some refused His light and opted to remain in darkness.  This is why He began His preaching with a call to repentance: "Repent, for the kingdom of heaven is at hand."  To repent means to acknowledge our darkness and to open ourselves to the light.  For those who accepted Him, Jesus truly becomes the light of their lives, the light of the world.

We still walk in the bright light Jesus brought into our world.  By living in it, we became a source of light to others, a lamp for their steps and a light for their paths.  That is the challenge of being a disciple.  Those who have received the light must radiate that light.  They must infect others (a-choo)  You must be a source of love, compassion, and a source of healing.  Not a source of gossip and not a source of division.  When you do these things you cause division.  Praise the Lord!  Alleluia!  (It's over?  noooo)

Do not believe Twitter!  (Uhm did you know the Pope tweets....)  Do not believe Facebook!  Believe only what you hear in the Gospel.  Praise the Lord!  Alleluia!  (It ended at 10:38...and Mass started at 10...and he read the long from of the Gospel.  I'm guessing this was 20 minutes at least).

On with the rest of Mass.  Father used the Apostles Creed.  The kids came up and gave money at the offertory.  Father used Eucharistic Prayer II and there were bells.

We must preserve our Catholic Schools!  (Indeed!  and they must be authentically Catholic...)

Father forgot the closing prayer but he did thank us for our patience.  It's the family Mass you see and stuff just happens.  Mass ended at 11:26.

St. John
Blessed Sacrament Chapel is in the foreground. 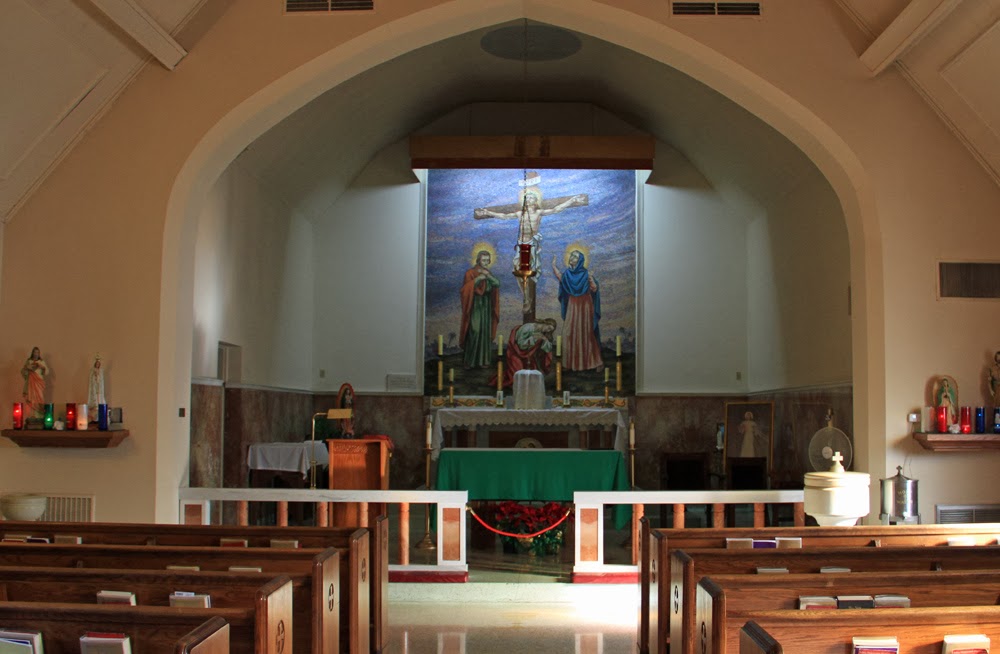 St. John the Baptist (I think..he's got a shell and no clothes..but a dog?) 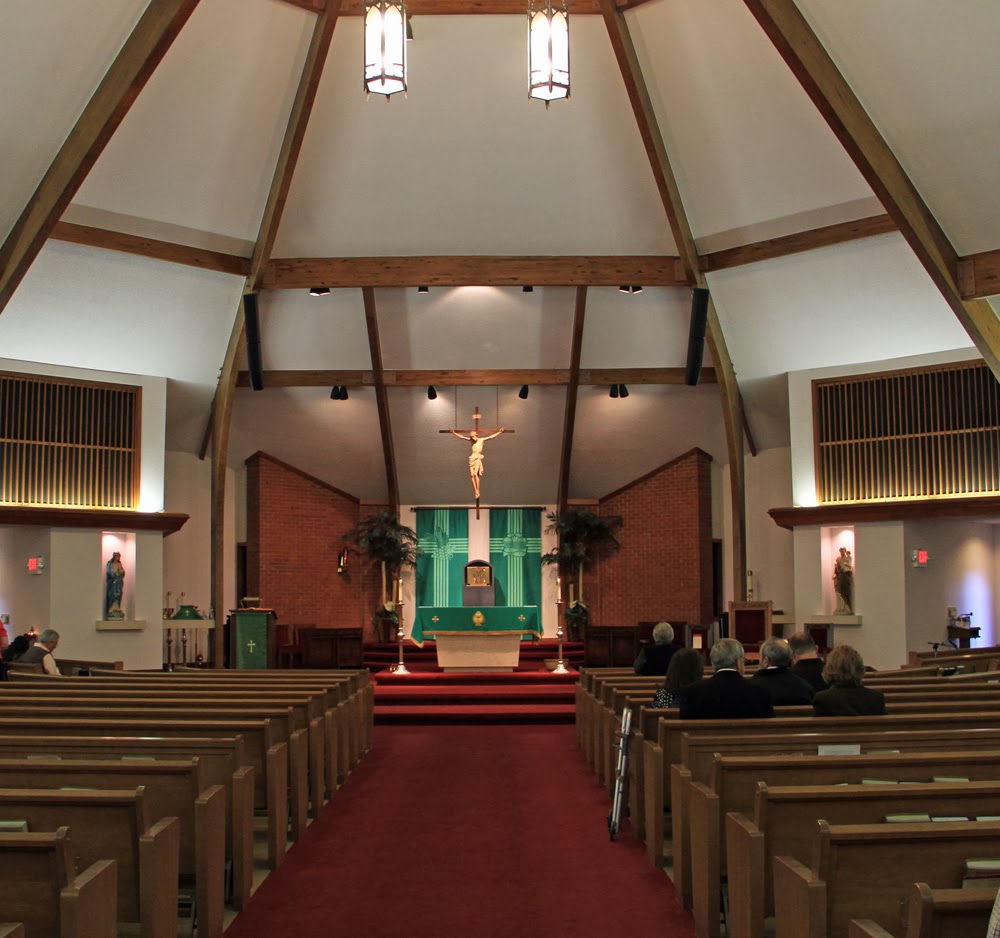 Building the City of God?
The Tower of Babel?
Time in Egypt?
St. Joseph? 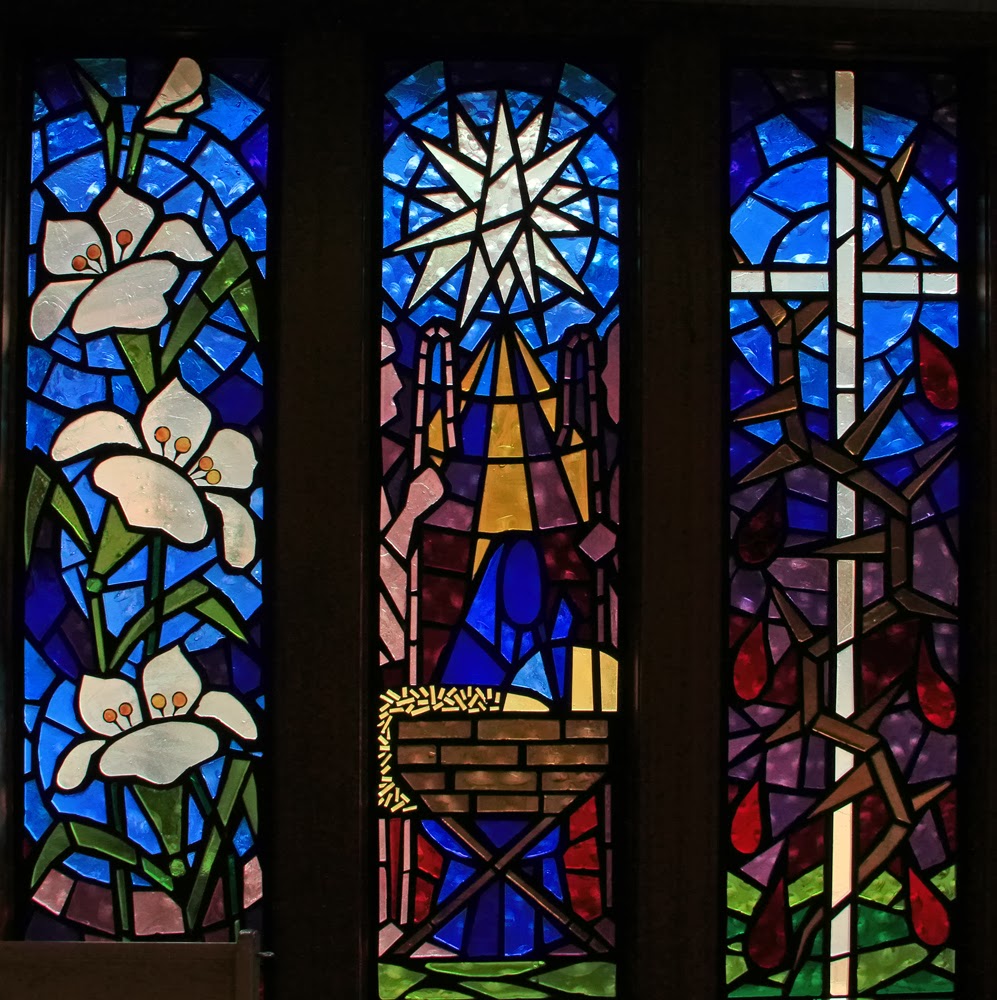 Christ the King (?), Wedding at Cana, Calming the Sea or Preaching from the Boat
How are these connected? 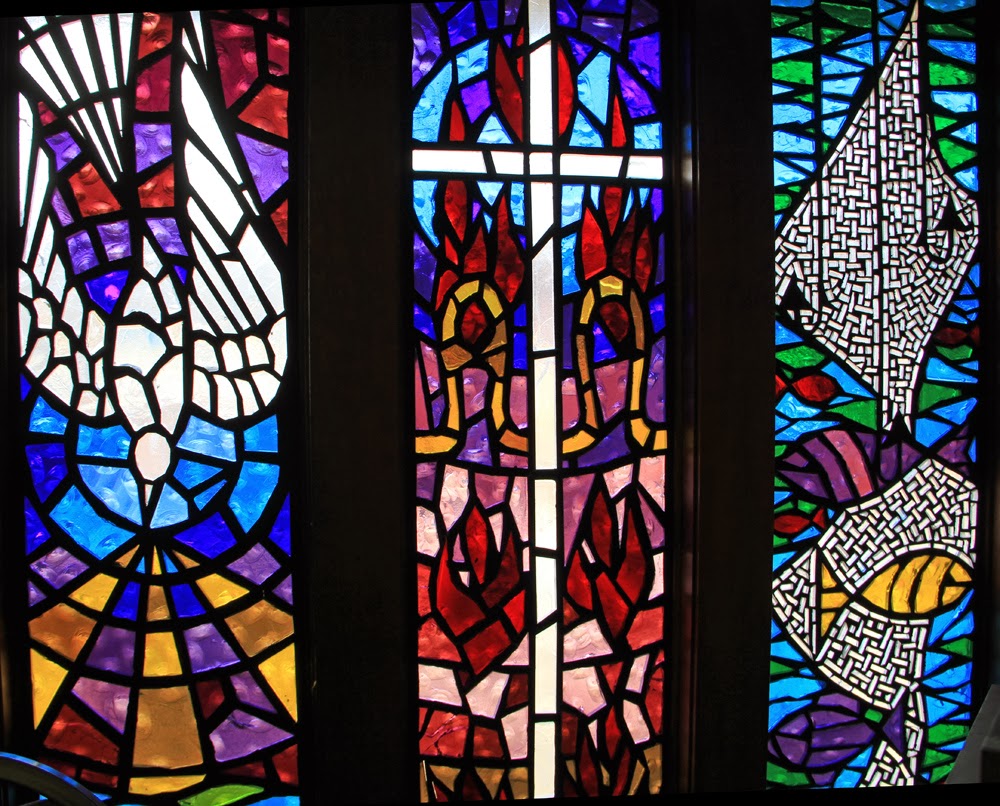 Holy Spirit, Pentecost, The story were Jesus fills the nets.
What is the connection?
I get how the first two are connected...not sure how the fish fit in. 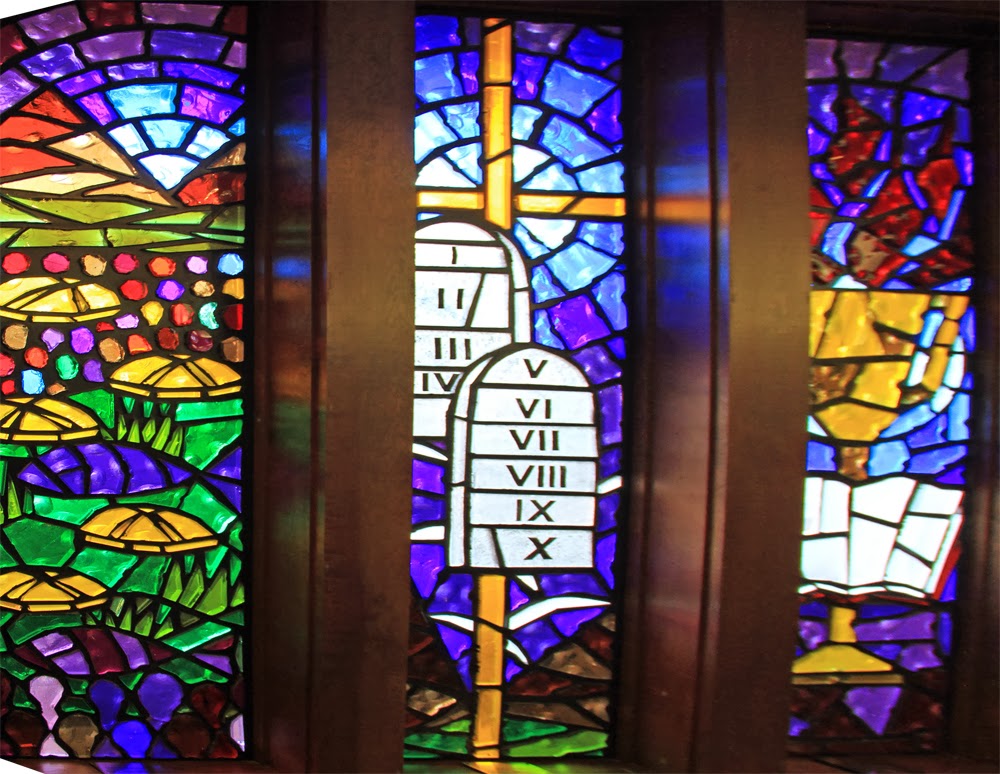 Feeding the Multitude (we seem to be short some fish), 10 Commandments, The Goblet of Fire...
Not sure how these are connected..