Good evening.  I hope everyone had a good Monday.

For Sunday Mass after a slight setback (no 3G, closest Masses were at 8 am... etc) I attended 11 am Mass at St. Vincent de Paul in Perryville.

The music was accompanied by a guitar, which was in the loft.
Music:
Opening:  Come Christians Join to Sing
Offertory:  The Servant Song; This is the Air I Breathe
Communion:  One Bread, One Body; Love Never Fails
Closing:  City of God

Before Mass there was a little summary of the Gospel and a greet your neighbor time. Father's stole was pea green.  I only noticed because I thought it was white and it's Ordinary Time and I was trying to remember what feast it was when I realized it was pea green and not a deep green.

Father's homily started off with a story.  There was a couple who were expecting a baby and discovered she would have a serious genetic problem.  They were offered options:  abort or keep the baby.  They decided to have the baby knowing the risks.  The baby died at birth.  The father of the baby told this story before the funeral Mass.  We all defend the right to life.  It imitates God's choosing of life.  We celebrated this little girl's life and ministry to people.  There was a moment of conversion in the pews.  How can we say that she was something to be gotten rid of.  We need to speak against the evil of abortion. We are being coerced into paying for abortion.  The Catholic Church can not do that.  We can not pay $94 a day for not complying.  Catholic institutions will disappear.  A man came up to Father after Mass and said that the Catholic Church just needs to suck it up.  Father was speechless.  Have you found a cross to die on?  We have found it in this.  The Bishop is willing to go to jail.  I am ready to get an orange jumpsuit.  In the Gospel, the disciples were sent out into the world.  It's not about sandals.  (Father apparently has more shoes than Imelda Marcos...which is disturbing) God says to us Don't Worry, I'm going to take care of you.  Don't let all of this stuff rob of us of our joy or keep us from proclaiming God's love for us.  Her life had value and meaning.  She was a Child of God.  We need to pray to God to heal of us our willfulness and our dissent.

Father used one of the Eucharistic Prayers for Various Needs.  The Our Father was sung.  People held hands too.

There was Anointing of the Sick after Mass. 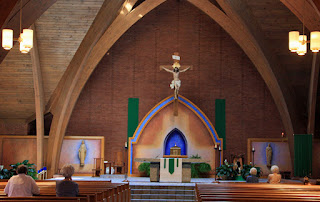 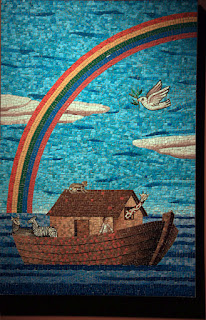 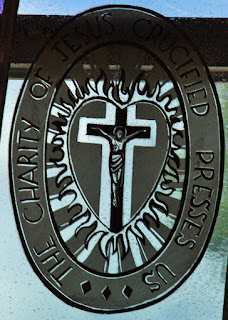 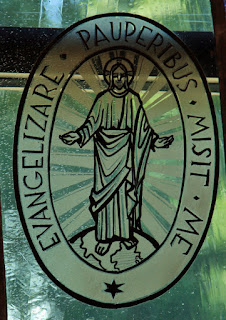 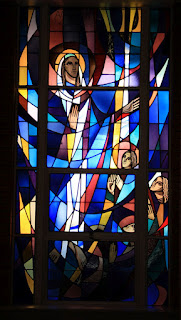 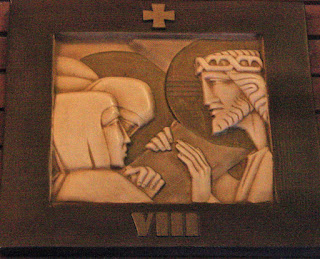 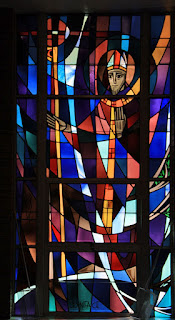 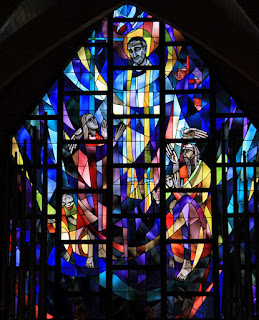 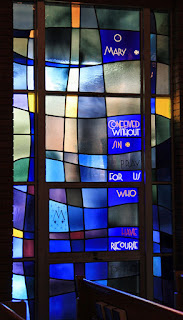 All of the windows were in this style...