This morning I attended the 9:30 am Mass at Most Holy Trinity in the Hyde Park neighborhood of north St. Louis.

The church is from 1898 and is a lovely old church in the style and size of St. Anthony of Padua or St. Francis de Sales.  The windows are very lovely.  Some modifications have been made such as the last 10-15 rows of pews being removed, but nothing drastic.  I excepted to see more African-American influence, but except for a statue of St. Martin de Porres, it was your typical older church.

I was a little curious when I drove up and noticed that the windows were open.  I don't think I have been in a Church for Mass with the windows open since I was in grade school.  I soon discovered that the church has no AC.  The church was relatively dark too but given that there is no AC I wouldn't turn on any extra lights either.  Had the Sun been shining, it would have been plenty bright in the Church.

The parish is a mix of people from the neighborhood and those that grew up in the neighborhood but now live elsewhere.  Everyone was very friendly and greeted me.  As a contrast to many parishes I have been in, I don't think I saw anyone in shorts, with strapless shirts or skirts so short I wonder how it is possible to genuflect.  It was very business casual.

The musicians were in the left transept instead of the choir loft.  The music was accompanied by a guitar,  piano and hand drums.
Music:
Opening:  Table of Plenty
Mass Setting:  Mass of St. Anne
Offering:  How Great Thou Art
Communion:  We Are the Light of the World
Closing:  Lead Me Lord

Homily:
The conversation between Jesus and the disciples was about where we can get enough food to feed the everyone.  Even with all of their wages, there wouldn't be enough.  This Gospel touches on scarcity.  We look for a contrast between scarcity and ?? ( I couldn't hear what he said).  There is an abundance in faith and charity through the Grace of God.  Scarcity drives people apart and they become alienated. This is the miracle we of Jesus this day.  It is not simply the physical, but His capacity to touch hearts.  Abundance is driven by faith.  The God of all creation will provide for us.  He will guide, nurture, and strengthen us.  When people seek abundance, it takes inquisitiveness.  It is rooted in relationships:  family, friends and Jesus Christ.  Relationships strengthen us in Faith.  All of this is about the goodness of God and relationships.  Deeper sense of mystery.  We need to believe in Jesus' ability to feed and nurture us.  Reality is rooted in this faith.  There is a rich abundance of God's life and love.  This invitation is for us to come to the banquet.  The God who loves us is the very God who sustains us.

We used the Apostles' Creed instead of the Nicene Creed.  I think that is a first.  There were open petitions where people could give their own petitions.  At the offertory, instead of a basket being passed, we all walked up to the front to put our donation in.  (Talk about peer pressure.)

The Our Father was sung and hands were held across the Church.  I think was explained to me as something to build community.  I'm in the back pew and many times I'm pretty far away from other people.  Today, during the Our Father, about half way through, someone noticed I wasn't holding hands and tried to hold my hand.  The entire thing annoys me honestly and only serves to highlight the feeling that I don't belong.

Once upon a time I was a flaming liberal.  As time has gone on, I have become less so.  The Sign of Peace free-for-all never used to bother me.  I thought it was kinda cool.  Then I became the "other".  So today, everyone is talking and laughing and moving around and I'm just standing there.  I don't know any one.  I am the "Other"; the Outsider.  People did come up and shake my hand (cause I've been at Masses that hasn't occurred...).  Then of course there have been the Incidents.  At one Church, a woman decided during the Sign of Peace to give me helpful dieting advice.  Needless to say, peace was not a feeling that I experienced at that time.  Today, I got hit on.  I'm all for abolishing the Sign of Peace.

There were wineglasses for the EMHC to distribute the Most Precious Blood.  Given that the parish was founded in 1848, I'm sure they have some non-glass mini-chalices somewhere....

Longish Liturgy of Announcements.  Next time I'm asked if I am a visitor, I'm lying.  I will say I was a parishoner years ago.  I had to go up to the Altar and introduce myself.  Everyone was nice though.  :)

Pictures:
Rain doesn't make the best light for stained glass windows.  It was too dark to get the windows about the choir loft sadly. 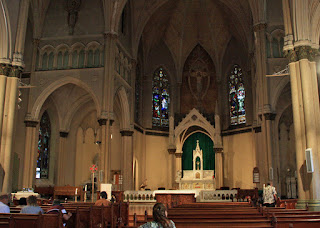 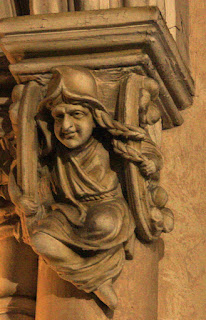 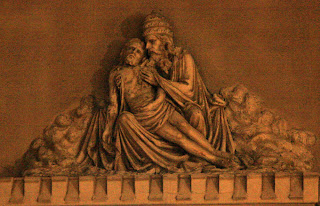 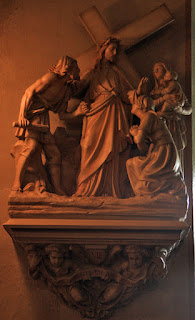 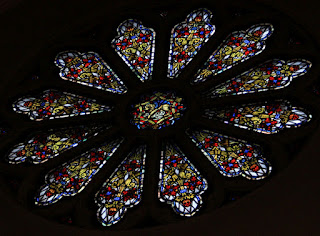 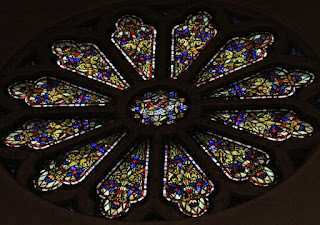 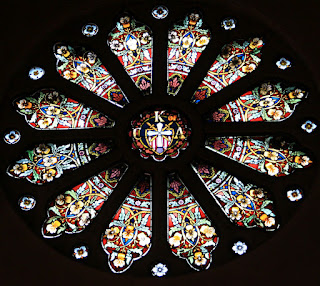 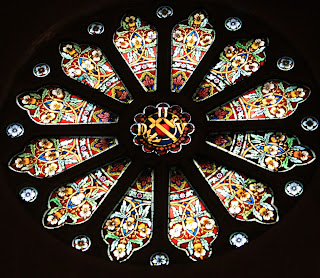 Has been informed this is
Faith Hope and Charity
You can tell because of the Heart, Cross and Anchor 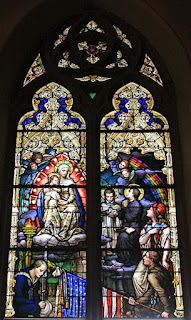 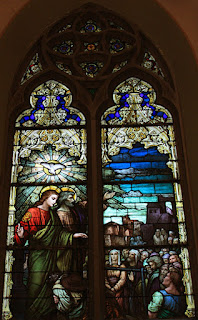 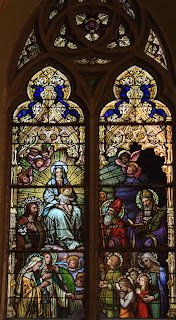 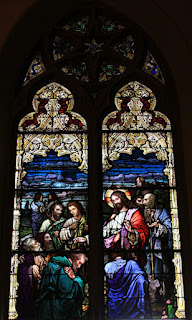 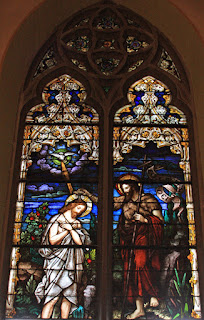 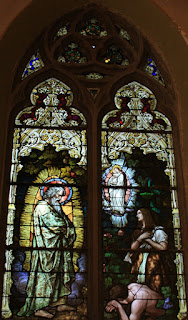 Links:
Website of Most Holy Trinity
Pictures from Rome of the West  (I think he has more pictures of this church.  In his book, Catholic St. Louis, which you should buy.  You should buy his park book too. :) They make awesome gifts.)
Posted by Tina aka Snupnjake at 3:53 PM