Imagine if you will 2 people in car driving around looking for Catholic Churches:

Snup:  I see a spire...
RoW:  According to the map, that's not St. Rose of Lima
Snup:  Yeah, it doesn't look Catholic.  It looks like some modernist Protestant church.
RoW:  St. Boniface is over that way...
Snup:  We have to go see!  (drive)  Is it that one?  That back looks awfully Catholic and there's a grotto/shrine in the back.
RoW:  Indeed.
Snup:  It's apartments!  It's like they chopped the front half of the church off and jammed on apartments.
RoW:  Turn here.
Snup:  No way is that Catholic.  That can't be St. Boniface.   I refuse to believe it.  It's like 1930s art deco....
RoW:  It's Facist.  That's the style.  It's not to my taste.
Snup: ugh.  ugh.  ugh.  ugh.  I'll take a picture.  Maybe Crescat will have another Ugly Church Contest.
RoW:  Mormon or Catholic.
Snup:  I could snark about this for days!  And they only have Mass here 1x a month...for the youth.  About 1x month would be all I could stand.  I'm getting old.  I'm getting conservative.  WAIL. 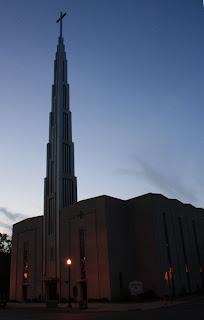 It's a box.  With a stick.
I like the steeple.  Just not on my Catholic Church.
I wonder if it shines...like the top of the Chrysler Building. This is a window.
I would like to say that Catholic Churches should not
lead you to having to go to Confession.
Because now I have to go.
I can't repeat what I said.
But this link might help...

Update:
I found 2 pictures of the old St. Boniface (exterior and interior).  This would be the kind of Church that produces saints yes?  Not an occasion of sin...

Posted by Tina aka Snupnjake at 7:50 PM