I hope you all had a merciful Divine Mercy Sunday.  I headed out to French Village, which is in a very rural part of St. Francois County.  So rural, I couldn't find a gas station...

St. Anne is a lovely little rural church that was pretty full for Mass this morning.

The music was provided by an organ which was in the front of the Church, but the pipes were still in the loft.
Music:
Opening:  Let Hymns of Joy
Offertory:  Lord of All Hopefulness
Communion:  Prayer of St. Francis
Closing:  Sing of Christ, Proclaim His Glory

Before Mass, we practiced the Sanctus from the Heritage Mass.  The organist mentioned that we were learning this Mass Setting because they are using it at the Cathedral Basilica.  There were also announcements and a prayer for vocations.

The homily was given by the Deacon.  He started off with his favorite story.  A man is walking alone and thinking intently about his problems.  As he is so focused on his problems, he is not paying attention and falls in a hole.  His doctor comes by and the guy yells for help.  His doctor says no problem and throws down a prescription (and then charges the insurance company an arm and leg).  The man's Congresswoman comes by and the guy yells out for help.  The Congresswoman writes a bill demanding signs around the hole.  The man's friend comes by, sees him and jumps in the hole.  The man says "Jesus, Are you crazy?"  The friend replies, I've been in this hole before and know the way out.  Today's readings are about trust, mercy and forgiveness.  There are 3 gifts:  peace, mandate to preach, reconciliation and mercy (hmmm that's 4.  uh.  hmmm.)  We are called by baptism to preach (oh we in trouble now...if I'm called to preach.  My homilies would be the bomb-diggity!)  But we need peace to preach.  How do we deal with doubters?  We show them the Body of Christ.  We show them the Body of Christ when we work bingos and fish fries to support Catholic education.  We show them the Body of Christ when we work the food pantry.  Do we not show the Body of Christ when on Sundays you see someone that needs a friend or a hug and we show the Body of Christ by hugging and being that friend (ugh on the hugging...and I'll just be quiet on the other part).  There has always been war and poverty.  This is why Jesus preached peace.  The Deacon talked a bit about this and then moved onto Divine Mercy.  He ended his homily with the prayer from a 2000 homily by Pope John Paul II on the Divine Mercy.  It was a nice homily.

Father used Eucharistic Prayer III and there were bells.  There was also hand-holding at the Our Father (but don't worry...my hand was not held...of course no one offered.....) 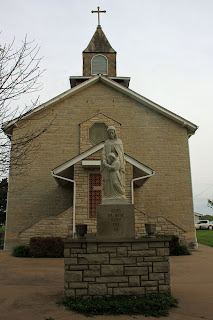 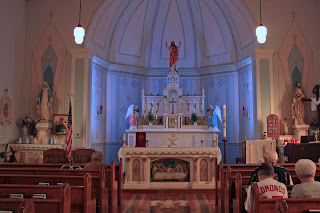 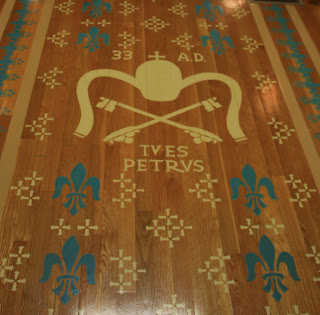 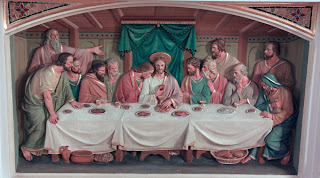 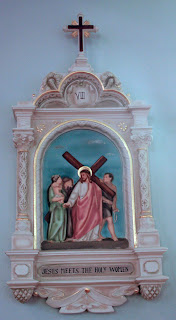 Links:
Website of St. Anne (It's connected to St. Joseph in Bonne Terre)
Pictures from Rome of the West
Posted by Tina aka Snupnjake at 6:23 PM