Transitus of St. Francis of Assisi

While browsing through the Calendar section of the St. Louis Review,  I noticed that St. Anthony of Padua was hosting a Transitus of St. Francis of Assisi.  I had never heard of such a thing, so I decided to check it out, especially since I'm contemplating (excuse me, discerning) becoming a Secular Franciscan.

Apparently, how the Transitus is celebrated varies from community to community.  I'll go through how it was celebrated at St. Anthony of Padua.

The Entrance song was All Creatures of Our God and King, the text of which was written by St. Francis of Assisi.  There was a small choir and the music was accompanied by guitars.  Amazingly, everybody sang!!!  It was really loud and filled up the Church!

Next came the opening prayers.

Then there was a series (4) of readings from The Life of St. Francis of Assisi by Thomas of Celano, A Reflection from the Perspective of St. Clare, and A Reflection from the Perspective of "Brother", Lady Jacoba (The readings are similar to things found in St. Francis and His Friends).  The most important thing I learned about St. Francis of Assisi tonight is that his favorite sweet was almond cookies.  Be sure to have some!!

After a period of silence, Father Wayne gave an awesome reflection about being open to change and how St. Francis of Assisi was all about change.  Father referenced Blessed Newman, who made the change from Anglican to Catholic and who also wrote about change.  It's not easy to change, it is very hard.  Blessed Newman wrote that to change frequently and constantly is the way to perfection.  For St. Francis of Assisi, he had to change and change constantly.  As he preached and such, he changed.  There was one constant in St. Francis' life, and that was the Gospel.  All of his changes were rooted in the Gospels.  Newman said change was the fulfillment of Christian living (I think this was the quote..).  We are all called to change - change based on the Gospels.

After this was a mediation song based on the Prayer of St. Francis that was pretty cool.  There were then Prayers of the Faithful.  Next came the Litany of St. Francis of Assisi (Here's a longer version, we actually prayed the middle part, with all the "titles" of St. Francis).  Then came the Final Blessing.

The Closing Song was Blessed Francis, Holy Father sung to the tune Ode to Joy.  Again, everybody sang!

Then there were cookies (almond ones too!)!  Everyone was really friendly :) 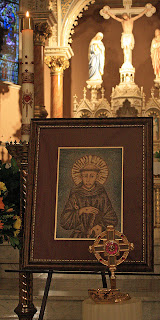 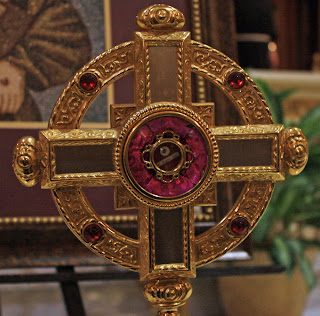