My presence was requested this weekend at St. Francis Borgia in Washington MO, because it is the Feast of St. Francis Borgia (10/10) and Mass was going to be extra special.  Unfortunately, I picked the wrong Mass to go to.  Apparently the patronal feast was celebrated at the 9 am Family Mass, not the 11 am slacker Mass ( ;p ), which would be the one I went to.  Except for intentions, nothing was mentioned about the Feast either.

I'm sorry to disappoint my commenter who wants me to hear organs; he's going to be disappointed yet again.  They have a beautiful organ at St. Francis Borgia.  The Mass I went to was accompanied by a piano in the front.
The Music:
Opening:  River of Glory
Offertory:  All My Days
Communion:  One Bread, One Body
Closing:  All the Ends of the Earth
I did not recognize the Mass Setting.

On a happy note, the Church has a new member!  Xavier was baptized during the Mass!  YAY!!!!!  Is that not a cool name?

Father's homily was rather generic in that it could have been used for any Sunday or occasion.  Father asked us to take a look at our busy weekends.  On Sunday 100s (I think Father means millions..there are nearly a billion Catholics in the world.  I hope more than 100s go to Mass....there were over 200 people at the 11 am Mass...).  We come to Mass to give praise and thanksgiving.  The primary reason we go to Mass is to give ourselves to God with the perfect sacrifice of Jesus.  Additionally, God will not be outdone in generosity.  We are nourished by the Scriptures.  We were blessed 40 years ago when the Mass was went to the venacular, which for us is English (I'm glad you clarified that for me.  I thought my venacular language was Swedish.)  We no longer had to read the missal.  (Has Father ever *looked* at the people...they are all following along in the missalette!  If that's the case, why do we have missalettes?)  Sometimes it is too much to take in at Mass.  Sometimes a phrase will strike you at a particular time.  You know what it means in a more deeper way.  The Holy Spirit turns on a light bulb ( I hope the Holy Spirit is using an environmentally friendly light bulb...).  We are nourished by Communion.  It is a mystery as Jesus' great love for us.  He wants to be close to us as food (can he come as pizza next time?)  We are nourished by each other.  We need each other.  We need Church.  Being along isn't good.  When Mass is over we should feel two things (relief?).  Exultation/refreshed and exhaustion (rats!).  If we really put ourselves into it we will be empty of self.  (My eyes are exhausted from rolling).  We all help each other with Faith.

During the baptism, Father explained what he was doing before each step.  Every Baptism is a little Easter.  What was odd, was that he didn't have the parents and godparents make the Baptismal Promises, instead, he had everyone recite the Nicene Creed and called it good.

Father used Eucharistic Prayer II and there were no bells.  They had an odd set-up for Communion.  Two EMHC came to the middle of the church in the center aisle to give Communion while the priests were at the Communion rail.  I guess the theory behind this was that the front half of the church went the priests and the back half of the went to the EMHC.  The only problem was that good Catholics don't sit in the front, so the priests were finished at least 5 minutes before the others.  Instead of coming to the middle of the Church, they just went back to the altar.

Above the Doorway
The plaque is a dedication plaque.
It's in Latin.
If you like (ask in comments) I'll get the writing off a bigger image
so you can translate ;) 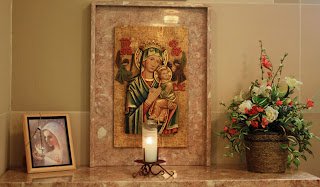 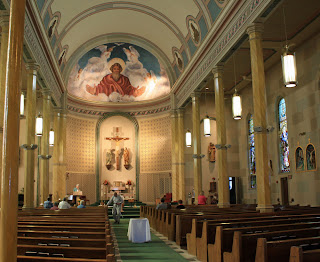 View From the Back Pew.
The painting makes me sing:
He's got the whole world
In His Hands.... 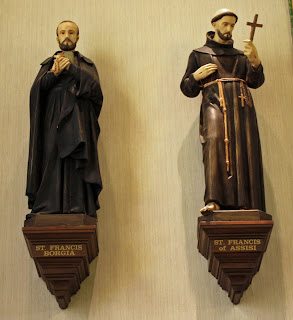 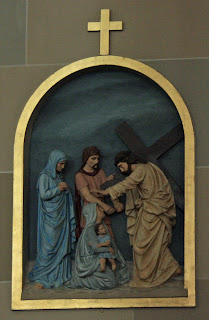 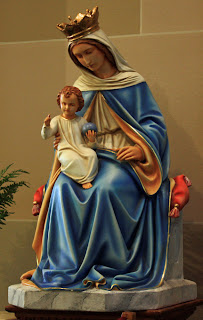 Mary and the Infant Jesus

Baptismal Fountain
Was not used for today's Baptism. 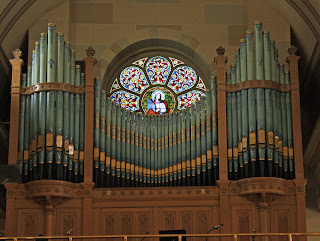 Organ
The pipes are bluer... 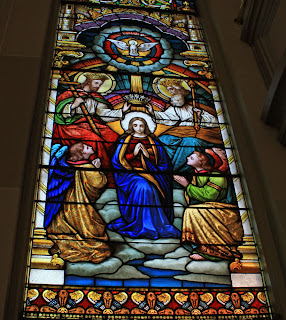 Mary being presented in the Temple? 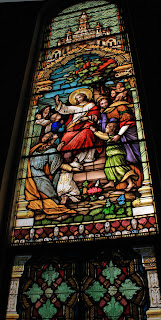 The Holy Family
Jesus is carrying a cross in this window too
but if you don't look closely
it looks like a 2x4 and a squaring tool
not as creepy.
(More windows will be posted...eventually)
Link:
Website of St. Francis Borgia
Pictures from Rome of the West
Posted by Tina aka Snupnjake at 11:37 PM