I attended the 10:30 am Mass on Sunday, August 30, 2009 at St. Bernadette in Lemay, which is a suburb located south of St. Louis. The Church is located right outside the gates of Jefferson Barracks, which is a Missouri National Guard Post and National Cemetery. Looking at the Church and the rectory, one gets the sense they were part of the Jefferson Barracks once upon a time. Father did mention in his homily that the Church used to be a theater. You got the sense the building itself was not originally a Church and this confirmed it. I actually thought it might have been a gym or hanger of some sort, given the shape of the ceiling.
The Church is small. It seems about the size of Cure of Ars or maybe slightly larger. Again I got the feeling it was only supposed to be a temporary church building.
The music was a mix of older and newer songs, accompanied by a piano. Apparently there is a choir that sings, but they are currently on summer vacation. The songs were:
Opening: From All That Dwell Below the Skies
Offertory: Christ, Be Our Light
Communion: Blest Are They
Recessional: Let All Things Now Living
I was a little nervous when Father appeared wearing a stole I swear I saw in The_Crescat's Ugliest Vestment Contest. It was over the chasuble and was of tapestry material with big tassels a the end. The print was the Children of the World print. However, there were no ad-libs as far as a I could tell and there wasn't a liturgy of announcements either. The EMHCs had special necklaces....
The homily, well, started off well about Jesus' unwritten Law of Love. It then became a lovefest about our new archbishop, Archbishop Carlson. At one point, I wondered if he had died and I had missed the news. Father then encouraged the congregation to write notes to Archbishop Carlson welcoming him and telling him how glad we were he was here. I then started wondering if church closing rumors were going around again. The word "pastoral" kept being used as well. Don't get me wrong. I love our new archbishop (he's got 3! dogs, how could I not love him?) but I wonder if a homily is the best place to express our love for him.
Links:
Picture from Rome of the West
Website courtesy of the St. Louis Archdiocese
Pictures: 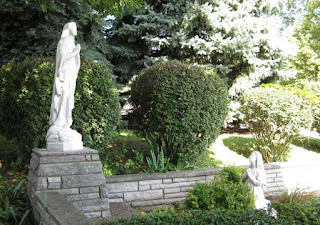 Outside the Church - Our Lady visiting St. Bernadette 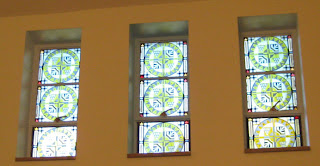 Windows Throughout the Church - I think they are grapes &
grape leaves, with crowns in corners. 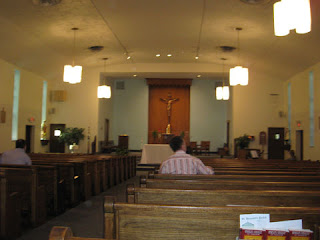 The View from the Back Pew!
Until Next Sunday!
Oh! If anyone knows when and where the Blessing of the Animals is being held, drop me a line! Thanks! Or if you are a priest and would like to bless a very sick basset hound, let me know!
Posted by Tina aka Snupnjake at 6:18 PM