St. Mary of Victories Church;Chapel of St. Stephen of Hungary

I visited St. Mary of Victories Church, also known as the Chapel of St. Stephen of Hungary on August 16, 2009. I went here this weekend because it was homecoming. St. Mary of Victories has a 9:30 Latin Novus Ordo Mass and an 11:30 English/Hungarian Mass. I went to the 11:30 English/Hungarian Mass.
It was a little hard to get to because the interstate is right in front of the Church. You drop off the interstate and you are at the front door.
When I went inside, I immediately realized I was in a Roman Catholic Church. There were candles for me to light (YAY!!!) and the scent of incense lingered, as if the walls had soaked it right up. I then realized the Church had no air conditioning and because of the proximity to the interstate, the 6 windows couldn't be opened.
Unfortunately...the audio and the acousitcs in the Church were horrible so I didn't hear very much. I can tell you the songs were sung with an organ and I think they were in Hungarian. The second reading was in Hungarian and the Eucharistic Prayer was in Hungarian. Based on the length, I'd speculate it was the Roman Canon. There was no Precious Blood distributed at Communion. The altar servers wore cassocks and surplices (one was tatted!!). The altar linens all had Hungarian embroidery on them. Because it was the Feast of St. Stephen, Hungarian prayers to St. Stephen were offered at the end of Mass. All in all, it was a very reverant Mass.
After Mass, I met a friend and watched him eat goulash. I also talked with a Sister of the Most Precious Blood (in a habit!).
I remembered my camera this week, but forgot my memory card, so cell phone pictures are all I have. 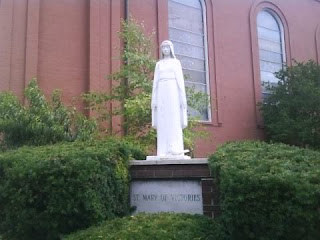 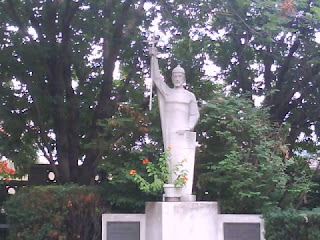 St. Stephen of Hungary..in the Courtyard. 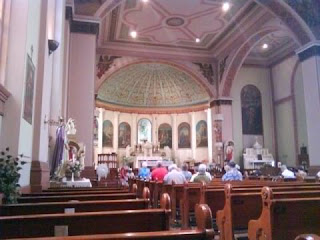