Hello all!
This morning I attended St. Rose of Lima in Carlisle AR.  Mass was at 11 am.  As usual in these small town churches, there was a Rosary recited before Mass.

Music:
The organ was in the choir loft.  There was no choir or cantor.
Opening:  To Jesus Christ Our Sovereign King
Offertory:  The King of Glory
Communion:  O Sacrament Most Holy
Recessional:  Crown Him With Many Crowns

Father went all out for this Mass.  He recited the antiphons.  Father sang/chanted nearly everything except the Eucharistic Prayer (He used II by the way.)  The Confiter was said and we chanted the Gloria.    Father mentioned that "At the end of Mass you will receive Benediction from the King.  Think very seriously on this."  The Our Father was sung.  However Father did give the peace sign at the Sign of Peace.  There were bells too.

At the start of the homily, Father mentioned the incense was to drive Baptists away.  Incense is used to worship the True God, not to fake gods.  Today we fulfill the Psalm "Let Us Go Rejoicing to the House of Lord."  The best symbol of the House of God is Mary.  She carried the King of the Universe. Father said Mary wore a hijab/burka.  God desired Mary's beauty.  She would not have survived her virginity in this day and age.  Mary is noted as Queen throughout the Old Testament.  The King is here with us always unless you leave.  Your children, your grandchildren, even my nephews and nieces, are all leaving.  They are leaving because they don't know the King.  They don't because the world distracts them from the King (and we are doing a terrible job of passing on the Faith and identity...).  The world doesn't fill them with Joy.  Joy from serving...(he said joy comes from other things but I couldn't keep up).  I have a feeling Rome and Jerusalem will be bombed (uhm...)  We may be the ones to do it, although it will probably be Islam (oh dear...)  Israel knows what to do.  Putin knew what to do to get Iran to do what he wanted.  Putin worked with the KGB (yikes. Somehow I don't think Putin is the example we want to go with...)  Obama told us we must kill.  We must kill our babies in the Affordable Health Care Act (blink.  blink.)  His interpretation of the law (which we had to pass to read...)  He has lied.  Some people think he is king.  If he is king of anything, he is king of the underworld.  (blink blink...well then..let me grab my jaw from under the kneeler here)  The world wants us to sin.  (that is true)  Right here you can be saved.  The Pope is an interesting man...an interesting man to follow (define "interesting" for me...)  Listen.  The Pope is being interpreted many different ways but listen to his words.  The Jesuits, and there have been some good Jesuits this century, are the best educated and the best educators and even they are having problems.  Pray to the King to keep us close to Him, to Mary, to the Saints and to God.

At the Offertory was the time for announcements.  Father mentioned that there was a 2nd collection for the Campaign for Human Development but he'd rather give to Catholic Relief Services as the CHD sometimes give to bad things.  Then Father mentioned he got a letter from the Bishop about a letter from Rome.  Father is going to write to Rome directly as the Rome wants to hear from the priests not the bishops.

At the end of the Mass, there was a procession with the Host around the Church.  Mass ended with Benediction. 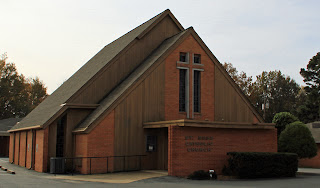 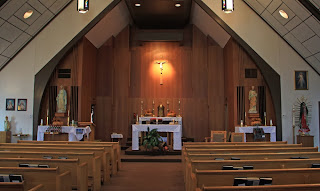 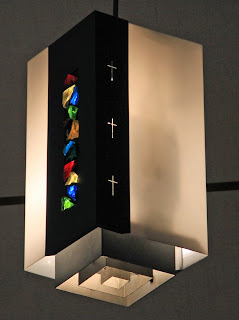 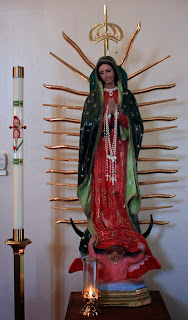 Our Lady of Guadalupe
Practically every parish has a Spanish ministry 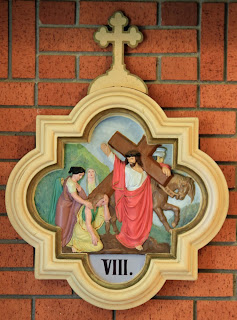 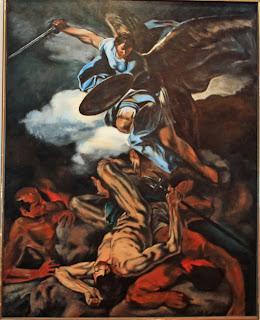 St. Michael the Archangel
(The prayer was said at the end of Mass)

Posted by Tina aka Snupnjake at 8:44 PM