What's better than going to Mass once in a day?  Why going twice of course!

I'll confess.  My new territorial parish is Christ the King in Little Rock.  On the 2nd Sunday of the month, the young adult group does all the Mass things like Lector and Usher at the 6 pm Mass.  For the most part...the group was pretty incognito... The parish is upper middle class.

I can tell you I'm contemplating finding a new parish already.  I just can't go to Mass in some place without windows to the outside and looks like an auditorium converted to a church as an afterthought.  (I understand that has happened but to intentionally build it that way???)

Announcements were read 8 minutes before Mass...before everyone got there...and Mass was full.

The music was lead by a cantor and a pianist.  Apparently the organ was dedicated in 2006.
The cantor only lead the 4 hymns and the responsorial psalm..the Mass parts will all spoken.  I'm not sure how Catholics managed before there were cantors...but I distinctly remember no cantors when I was growing up...(back in the day...)
Music:
Opening:  I Am the Bread of Life (uhmmm...this is a Communion song...not a gathering song...)
Offertory:  Shepherd Me O God
Communion:  I Heard the Voice of Jesus Say (I head Him say less banal music...)
Closing: Mine Eyes Have Seen (or as it is more properly known:  The Battle Hymn of the Republic.  And don't even get me started on the word change in verse 4 thanks to Gia/Worship/Gather/OCP.  The original line is "As He died to make men holy, Let us die to make men free." It has been changed to "As He died to make men holy, let us live to make all free"  I'm sorry this totally changes the meaning of the song.  This song was written during the Civil War..which was about ... a bunch of people dying to set other people free...why why why....why are we so afraid of our past??? I was actually surprised the Rebels were singing the Union's battle march...)

Homily:
At the beginning of the homily, Father recognized all the veterans.
We are at the end of the Church year.  December 1 is the beginning of the Church year.  The Readings will speak to us about the End Times.  It is a message of warning and preparation.  It is easy to give uplifting homilies (Oh Father...if only that were true)  It is hard to give a homily about the gate known as death.  The Church remembers the dead in November.  Veterans Day is to remember those who have sacrificed (uhm...no it's not...that's Memorial Day or Remembrance Day in the Commonwealth.)  There are seven books in the Bible that only Catholics have.  The First Reading is from Maccabees, one of those books.  Judea was being persecuted.  The Jews were being persecuted and humiliated such as being forced to violate Jewish dietary laws.  The Reading today was preceded by a story about Eliezer.  Eliezer was a very old and respected.  If he would eat pork, he would be spared the sword.  His friends tried to get him to pretend to eat pork.  He refused because it would betray the life he lived.  Why do we care about whether or not Jews eat pork?  The dietary laws were about discipline (and disease prevention...but let's not quibble)  Why do we recall this event?  What are the fundamental questions?  Is there anything in my Faith life I would change before I die?  In these last days of the Church year, it symbolizes the Coming of Christ.  When will He come?  One of you, at least, will be up here (refers to the shrine of the people who have died in the past year that covered the altar...at least I assume there is an altar under there...).  Death will come for you.  Not to be scary.  This season is to jar us that now is the time to change.  Not later as there may not be a later.  Death is the gate by which we enter eternal life.  Is the way we live our life going to get us eternal life?  Good news, God is bigger.  God calls us.  What would Jesus say to you to change in your life?  Now is the time.

Father used Eucharistic Prayer III and there were bells.  The congregation stood during Communion, from the end of the Agnus Dei to when Father sat. 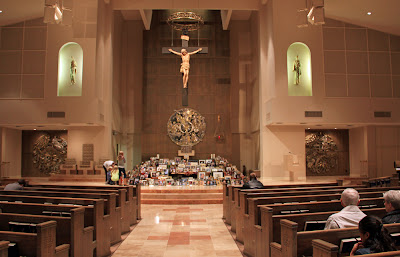 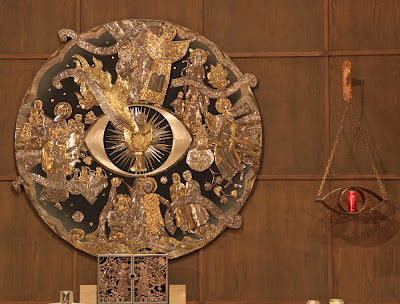 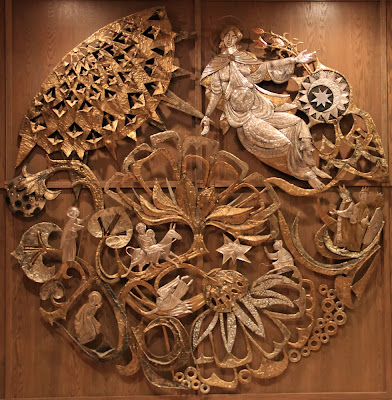 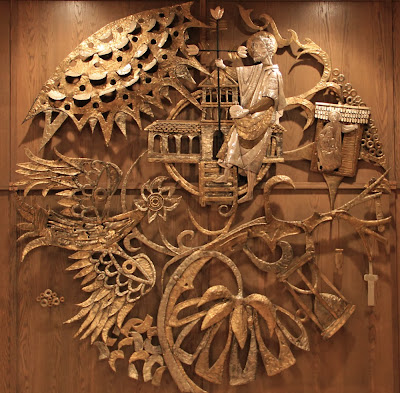 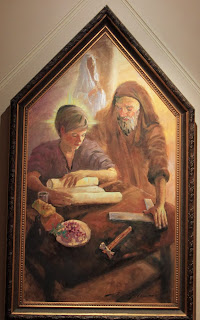 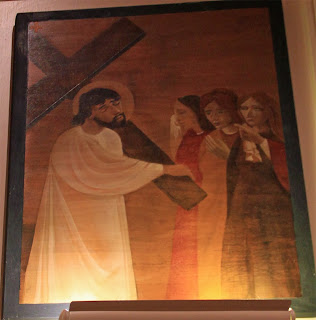 Link:
Christ the King
Posted by Tina aka Snupnjake at 6:45 PM