I was feeling a bit homesick and trying to find a church to visit this morning.  As I was looking at the list of parishes, St. Boniface caught my eye.  Perfect!

I attended the 8 am Mass at St. Boniface in Bigelow.  Before Mass, there was Adoration, Rosary and Confession.  There were prayer books in the pew.

St. Boniface is a very cute little church.  It was built in 1906 but the high altar was saved from the fire that build the first church built in 1896.  The side altars were carved by a parishoner to match the high altar.   From what I understand, the parish has a goal to keep the church looking like it did when it was first built.

The music was provided by a girls choir and I understand this was their first Mass singing.  They were very sweet.  The organ and choir were in the front because the seating in the choir loft was needed for parishoners.
Opening:  We Gather Together
Offertory:  Prayer of St. Francis
Communion:  Look Beyond
Closing:  Lord of the Dance

The homily was incredibly short :D
The Bishop of the diocese has asked for a second collection for the victims of the Philippines Typhoon.  Father mentioned that there were a couple of Thanksgiving Ecumenical Services.  An atheist travels down a country road and sees a rabbit and a priest fishing.  Next to them was a sign that said "The End is Near"  The atheist got out of the car and yelled at them and then sped off.  There was a screech of brakes and a splash.  The Rabbi said "I told you we should have just put Bridge Out"
This is the last Sunday in the Church Year.  Next week is Christ the King.  The End is near.  We don't know when.  If we knew when, my ears would burn from all the Confessions.  People waiting to the last minute.  Grease me up so I can slid right into heaven.  Do we really want to live like that?  The people in the Philippines must have thought the end was near.  I saw a picture this morning of a Philippines celebrating Mass.  The Church was packed and it had no roof.  Do you have that kind of Faith?  The End is coming:  Are you prepared?

The Apostles' Creed was said.  Father used Eucharistic Prayer III and there were bells.  And the Church bells were rung right before Mass. 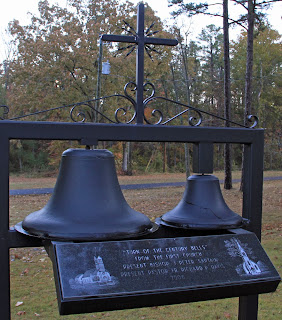 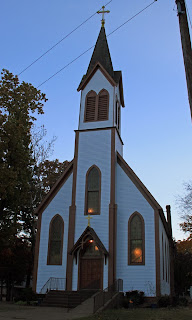 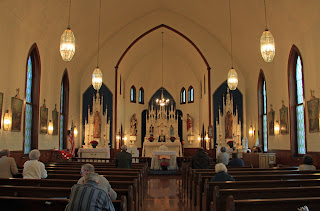 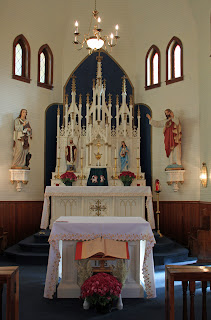 Posted by Tina aka Snupnjake at 9:03 PM