The choir is in the front on the right as well as the organ.
Music:
Entrance:  Jesus, the Bread of Life
Offertory:  Seek Ye First
Communion:  One Love Released; Seed, Scattered and Sown
Recessional:  Now Thank We All Our God

Father wore a green chasuble trimmed in Kente cloth.  Let's just say that it was unexpected given the demographic makeup of the people in the pews.

Father was a big fan of mini homilies.  There was one before the Penitential Rite about the Readings.  There was one at the petitions, asking God to touch the hearts of those who thought coming to Mass today was a great burden and those that are thinking next week will be a burden.  The Liturgy of Announcements was long.

Homily:
Father went on a vacation with his priest friends last week.  Naturally, when priests get together they talk about the food they had in the seminary.  Father remembered one worker who told them that if they didn't eat it for dinner they would have it for breakfast.  The two inch hot dogs.  Those could have been breakfast sausages.  All the grumbling we did reminds me of the First Reading.  The Israelites were grumbling.  They asked God to free them from slavery.  He did that.  The Israelites wanted to go back to slavery because they at least had food.  God was like Why don't you trust Me?  We all have a complaining spirit inside.  We need a spirit of gratitude like Jesus.  Grumbling begets more grumbling.  Stewardship is coming up.  We need your time, talent and treasure.  It is less than God does for us.  People who want things but don't volunteer to make those things happen.  Those who have a grumble with the Church need to look at the beginning of today's Gospel.  Judas distributed the loaves and fishes.  Peter, who suffered from foot in mouth disease, and John and James, who were so full of themselves and the rest of the clowns all distributed food.  The Church hasn't changed since then.  We come up to work.  We are in training.  Manna is a joke.  The joke is on the Israelites. (Refers to his mini homily about manna meaning:  What is this stuff?)  Lord what is Your Food.  What is Your Bread of Life?  What do you want me to gather from life's desert.  You can't give zero.  Doesn't the Bread of Life make you hungry to give more?  Once you do this little work, God will do work in you.  That is the message of this table.  The Lord is showering us with gifts.  Next week the financial reports will be announced.  Please don't skip Mass.  (He went on about this at various points, even going so far as to pray for it.  I'm guessing it is bad news.)

Father used one of these Eucharistic Prayers I think.  There were bells at the Consecration. 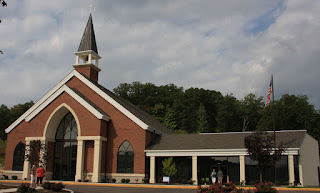 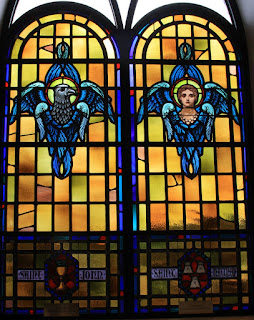 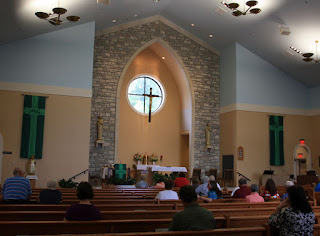 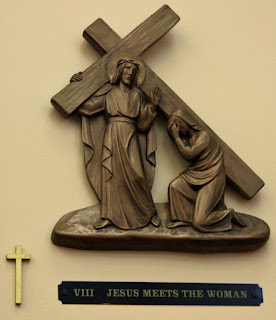 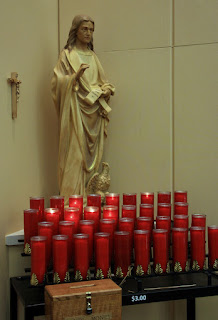 Link:
Website of St. John Imperial
Posted by Tina aka Snupnjake at 2:55 PM