This morning I headed to Resurrection of Our Lord in South City.  I remember back in the day when this was a territorial parish with a school.  (We played against them in sports.)  Now it is the home of Vietnamese Catholics.

Resurrection is a modern, pre-Vatican II church.  It is more fan shaped than straight.  The windows are at the top of the walls like at Mary, Mother of the Church.  It is very cleanly designed inside.

The windows are the more traditional flat thin glass in shades of black, yellow, reds and browns.  I have to say the actual art on the windows was uhm scary.  The heads of the Apostles were disembodied and very emaciated.  It was more reminiscent of skulls...

Mass was very full this morning.  Many women were in traditional Vietnamese clothes and most people were nicely dressed.  There were even 10 Sisters, 9 in habits.  The 8 Sisters in front of me were all younger than me.  They also spoke very little English....

The choir was up in the loft.  The music was very nice and seemed to be more Western but with Asian elements, if that makes any sense.  I'd love to tell you what they sang but alas, I don't know any Vietnamese.

Nearly every response and every part that required a response was sung/chanted.  The Confiteor (at least I think it was...) and the Creed were sung.  There were bells at the Consecration.

At the end of Mass, everyone turned to the statue of Mary and said a prayer and sang a song.  I tried to find out what it was but I couldn't figure out who could speak English....  It seemed too long for the Hail Mary. 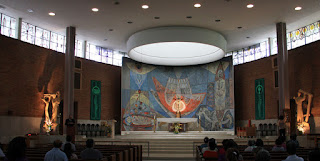 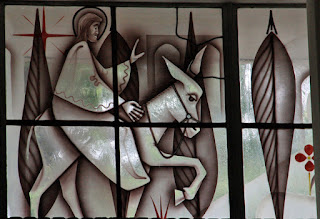 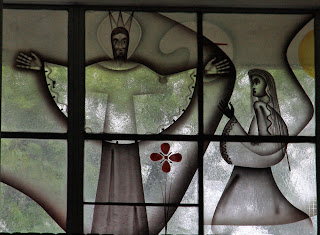 Staring at me...all through Mass
Creeping me out. 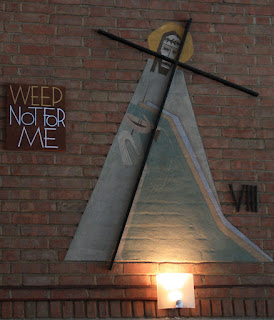 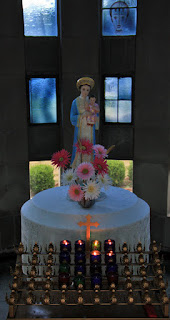 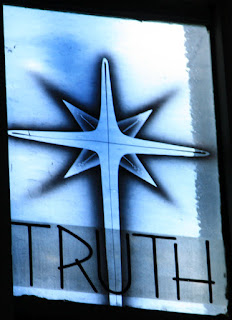 Links:
Website of Resurrection
Pictures from Rome of the West
Pictures from Built St. Louis
Posted by Tina aka Snupnjake at 4:10 PM