The church was modern, built in 1975.  It was rather sparse on the inside.

The music was sung a capella.
Opening:  We Are the Light of the World
Offertory:  One Bread, One Body
Closing:  They'll Know We Are Christians
After Mass one of the parishoners turned around and said I have a lovely singing voice....

Homily:
Back when I was a teenager, I served Mass.  There were 5 priests at the parish and you could tell which one was serving Mass by the chalice that had been set out.  I pondered chalices a great deal as a seminarian.  It was like when teenage girls look at engagement rings and are like maybe some day (more proof I'm not a typical girl).  It was the same with us looking at chalices, maybe some day.   I remember one chalice had a quote from St. John the Baptist around the cup.  He must increase and I must decrease.  This summarizes the life of a Christian.  Jesus must increase and everything else must decrease.  We want Jesus to increase in our lives.  The king in St. John the Baptist's time did not want to give space to religion.  John speaks to the truth and gets beheaded.  John's greatest virtue is fortitude. We have much to learn from him.  The Bishops have called for a Fortnight for Freedom to pray for religious freedom.  Picked this fortnight because of the different saints' days during the two weeks.  St. John Fisher and St. Thomas More were beheaded for speaking the Truth.  Sts Peter and Paul were martyred for the Truth.  (3 out of 4 were beheaded) They were men for all seasons.  The most cherished and most important is religious freedom (wouldn't it be freedom of speech?)  It is the foundation of freedom.  All freedoms are fragile if conscience is not free.  Refuse to obey an unjust law such as the HHS mandate, which concerns abortion and not just conception or feeding undocumented people.  We don't feed people because they are documented or undocumented; we feed them because they are hungry.  We may be called like John the Baptist.  It is a gift from God, an inalienable right.  We insist on speaking the truth.  I will play Archbishop Carlson's speech to the state legislature after Mass (anyone have a link to it?  It's the one he said he won't pay and he'll go to jail...)  We may be called to sacrifice.

Father used Eucharistic Prayer II and there were bells at the Consecration. 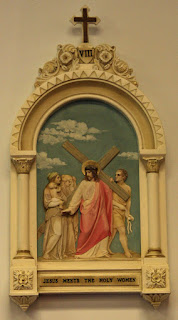 Link:
Website of St. John the Apostle - Bismarck
Posted by Tina aka Snupnjake at 11:30 AM