This morning I was up incredibly early.  Early enough to take a really long drive to Mass really early.  I drove out to St. Joseph in Apple Creek.  Mass was at 7:30 am.  I left my house at 5:30 am.  Ugh.

The parish of St. Joseph has been around since 1828 with the current church building being completed in 1884.  It is a lovely church, typical of many of the rural churches I have visited previously.  What I especially like about St. Joseph is the Grotto/Shrine.  They have dammed up a spring and made a shrine/grotto there.  There's an outdoor Altar and Mass is celebrated there occasionally.  It is a very pretty and peaceful area.

I was actually greeted by someone from St. Maurus.  She was like you really are going around to all the churches.  Inside, a man asked me what I had in my hands.  An iPad.  He's like in church (in a very disapproving tone)  I'm like yes.  Mass hasn't started yet so?  I suppose if I was playing Angry Birds it might be a problem but I was checking to see if a friend was up and reading about God being our Father and all that rot for Father's Day.

Music was accompanied by an organ...in the loft!
Music:
Opening:  Seek Ye First
Offertory:  Only a Shadow
Communion:  We Will Rise Again
Closing:  Now Thank We All Our God

Father spoke incredibly fast. Hopefully I got the jist of his homily.  Louis Braille has an accident in 1812 that left him blind.  At the time, the blind read by feeling large raised letters that took forever to read.  An officer from the French military came to school and talked about night writing.  It was a code and a way to read messages in the dark.  Messages were relayed by punched holes.  Braille was fascinated and worked on modifying the system, simplifying it and making it raised does.  Braille's story teaches us three lessons, the same three lessons found in the Readings.  1.  The greatest movements in the world grow from the tiniest ideas.  2.  People who begin movements are often tiny and insignificant themselves.  3.  They often die without seeing the results of their work.  The same can be said of the Church; it began like a mustard seed.  It started small and became large.  This is a time of trial for the Church.  Even if its members give scandal, the Church is still holy.  The Church is being persecuted.  The HHS mandate is an attack on religious liberty and a violation of church beliefs.  (blink.  I'm stunned.  A homily about current issues?)  All rights come from God (or those that think they are God...)  Their ideology (of the people trying to take our rights away) is based on relativism, and not on natural law.  Starting on June 22, the Feast of St. Thomas More, the Bishops are asking us to pray for our religious liberties for two weeks.  Those who persecute the Church will loose.  The Nazis and Communists tried, the Romans tried (somebody's been following a meme...) It is a doctrine of the Church that nothing will destroy the Church until the end of time (well, isn't that convenient.)  The Church is sometimes referred to as the Barque of St. Peter.  It will lead us through the storm and to the kingdom of Heaven.  Jesus has not abandoned His Church.

Father used Eucharistic Prayer III and there were bells at the Consecration.  After Communion, we recited a prayer to St. Joseph and another prayer.  Father gave all the fathers a special blessing.  We then said the Prayer to St. Michael. 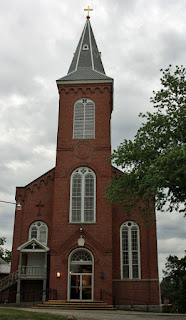 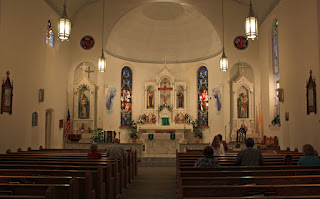 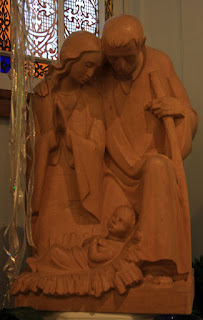 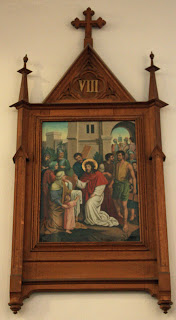 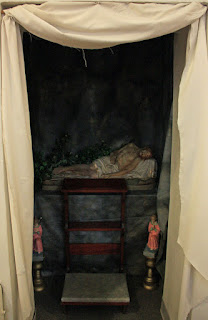 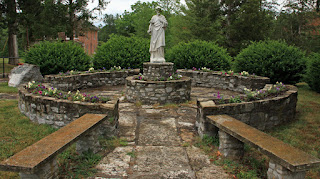 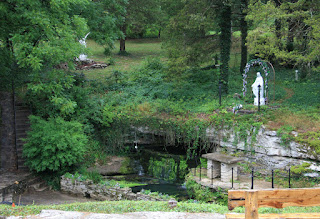 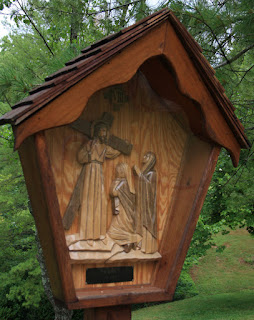 Links:
Information from the Archdiocese
Pictures from Rome of the West
Posted by Tina aka Snupnjake at 1:45 PM