This morning I managed to get up, beat traffic and make it to a low Mass at The Oratory of Ss. Gregory and Augustine, which is on the grounds of St. Louis Priory/St. Anselm and administered by the Benedictine Monks.   This was a Latin Mass.  I think it was a dialogue Mass with the congregation taking the part of the server.  I liked this a little better than just the silent Mass because having to respond helps me to focus.

Although the Oratory is in the basement of St. Anselm's Parish Center, it was still nicely done.  There was a statue of Mary (take note empty permanent churches!), Stations of the Cross and a nicely done High Altar.  Oh! and a huge old school Confessional in the back!

There was no singing or chanting, which I understand is common to the Low Mass.  There were Leonine Prayers after Mass.  We prayed the Hail Mary, Salve Regina and the Prayer to St. Michael.  Thankfully they were all in English.

Because it was a Feast Day, Father gave a short sermon.  He talked about he noticed the parallelism in the Epistle and the Gospel.  Today is a celebration of Mystery.  All Saints and All Souls are essentially the same feast but emphasize different aspects.  Today, we celebrate those that are immediately bound for Heaven and ask them to pray for us.  Tomorrow we pray for those that will eventually get to Heaven.    Father's sermon focused on Paragraph 1022 from the Catechism.  At Death, there are only two choices:  Salvation or Damnation.  We are a Christian People, we have hope, so damnation is hard to imagine and hard to dwell on.  Even worse, we have a hard time understanding that we could merit damnation.   In medieval times, every church had a Rood (the Crucifix with Mary and St. John) and the Doom (the Last Judgement)  prominently displayed (like in the center, behind the altar) to remind the people of the Last Things. 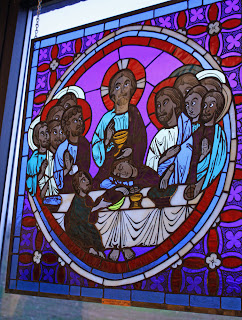 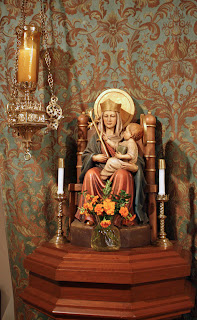 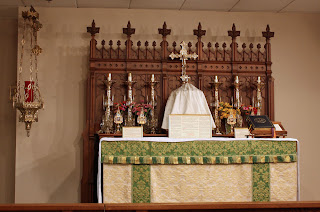 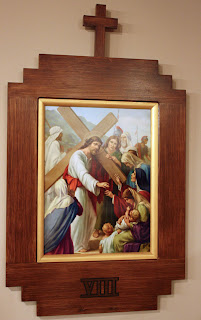 The VIII Station
Links:
Oratory of Ss Gregory and Augustine
Posted by Tina aka Snupnjake at 9:46 PM