October is another month traditionally devoted to Mary, especially the Rosary.  So I decided to visit parishes in some way connected to the Rosary in October.  My first stop was Holy Rosary in Warrenton (although Truesdale was just feet away), 64.4 highway miles from my house (took me about an hour).  This is in a rural area although it is experiencing some urbanization/suburbanization (The big hint:  The parish bulletin asked for donations of hogs...).   I attended the 11 am Mass on October 11, 2009.

This was a very modern church.  Very modern design.  The interior was a mix of modern and traditional. It was also rather small, only 14 pews on a side.  Mass was pretty close to standing room only.

There was no choir at this Mass, but there were two cantors.  The music was provided by an organ in the back corner.  The music:
Opening:  On This Day, O Beautiful Mother (Everyone sang, even the men!  I was floored.)
Gloria:  Gloria by Mike Anderson (It's the one with the clapping...but we didn't clap) (572 in The Music Issue) (mp3 with clapping!)
Offertory: Christ Be Our Light
Communion:  Eye Has Not Seen (connects with the homily) and Pan De Vida
Closing:  Gather Us In (Not to be snarky, but isn't this an opening or gathering song?)

Something different this week, the Confiteor was said in the Pentitential Rite and  Eucharistic Prayer III was used.  There was no processional Cross or bells at the Consecration.

The theme for the homily was What Must I Do?  and Where Do You Seek Wisdom?  and something about a sword and pain.

After Mass, I talked with Father who gave a little history of the Church.  He was very sweet!

Bell from the second Church.

(The current Church is the 4th.)

Holy Rosary has a Blessed Sacrament Chapel.  It was locked but I did get pictures of the outside for you!

There's a cross on top...but you can't see it because of the clouds. 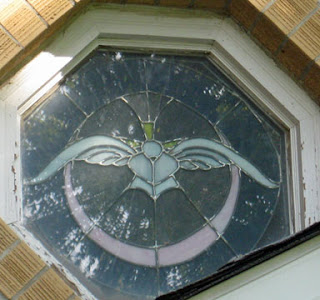 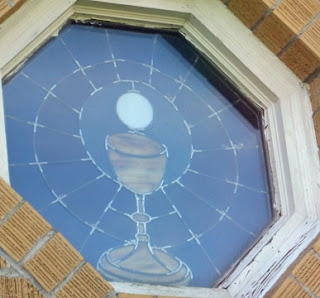 Back Window of Chapel

Cornerstone (Not on a corner BTW or the ground) 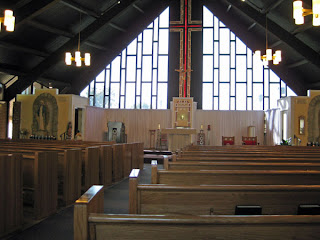 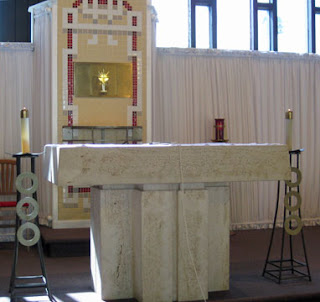 According to Father, the interior was renovated a few years ago.

The altar came from another parish.

The candle stands (and matching ambo) were made by a parishoner.

on the back wall.

Also, the renovation moved the Tabernacle from the side to the center. 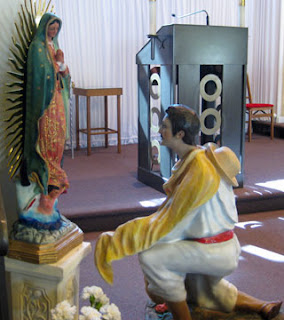 Our Lady of Guadalupe with St. Juan Deigo Botto

In the background you can see the handmade lecturn or ambo.