Evening all!  I'd like to wish all my St. Louis readers a Happy Feast of St. Louis!  I wish I was there to celebrate and go to a mass in French (and to get the plenary indulgence and the ice cream...).

I was in Tunica this weekend, gambling the rent money, and passed through Helena, AR (It's a combined city...Helena West Helena).  I decided to return here for 10 am Mass on Sunday morning.  It's a really nice church for Arkansas and it is the second one with walls the color of my parents' living room.  (I picked that color out and did the painting so I'm real familiar with it.).  I wish I had known the church was designed by Charles Eames (SQUEE!! The Powers of Ten guy!!!!!!).  The windows were done by Emil Frei (I wondered why St. Louis was in the window...).  I got to Mass 5 minutes before it started and like most churches, the lights were off 10 minutes after Mass :(  I'd have taken a picture of the ceiling had a known. (Eames designed a second church in Arkansas.....and I pass it every time I go to St. Louis....very interesting....) Wow.  Who would of thought.  Helena AR was big when cotton was king and is the site of a huge Blues Festival (King Biscuit Blues Fest), as it had a thriving blues community in 1940s & 1950s.  Apparently, besides cotton, the other major industry was rubber.  When the rubber plant closed, the town has faced rough economic times.  It's apparently one of the poorest cities in the nation....(which doesn't surprise me in the least...).

Everyone was dressed rather nice (except me...ooops).  The pastor is going back to the Congo for the next month, so his replacement was introduced this morning.

The music was supplied by an organ (and maybe bells) and a choir in the loft!
Music:
Opening: The Church's One Foundation
Offertory: Only This I Want; Let all Mortal Flesh Keep Silent
Communion: You Satisfy the Hungry Heart
Closing: Holy God We Praise Thy Name

Homily:  (For a change, I thought you'd like to see my actual notes, not the cleaned up version.  I had my ipad with me so I took digital notes.)
Word of god challenges us on authority
Symbolized by keys
Shopping for car.. Story of peter with big keys pope kisses statue not true

Prophet Isaiah speaks to man incharge of palace...chief of staff or prime minister
People who have lot of authority
God says will throw out and replace
All symbols will be given to him
Not good news if you threaten those with power...died in a "road accident". How people with big powers behave
Keys are given symbolize of authority
Have responsibility
Not only to those to government
Responsibility in family..
Parents are everything...have power, give displace and security
Difficult without parents when are young
Responsibility when you farm... Teach others..gives authority
It is nothing if not at service
Not priest for self...for others
What is point without congregation
U are good teacher when your students succeed (ugh...education reformy language)
Authority do your best
Peter has authority in faith
Only man god choose. That god reveleaded to him...who the son was and the father
Through peter we know that Jesus is son of god
Who do you say I am...Jesus continues to ask us
What is your answer...determined your commitment
When man and woman together,...what they call each other determines the commitment
If we never say Jesus is god, we don't have right relationship
He's not prophet, he is son of god...we profess this everyday

Father used Eucharistic Prayer III and there were bells at the Consecration.  The Holy Holy and the Lamb of God were sung in Latin and the Our Father was sung.

During the announcements, a note from Bishop Taylor was mentioned and Father further talked about it.  Basically, the Bishop is asking us to pray to stop the Black Mass in Oklahoma.  Father discussed it and talked about spiritual warfare.  Additionally, Father mentioned when Confirmation was this year and if you'd never been Confirmed, it wasn't too late.  (wow...topics I rarely here about at Mass.)

Pictures:  (Sorry...I was rushed..window #1, St. Anne and St. Joachim are all unusable) 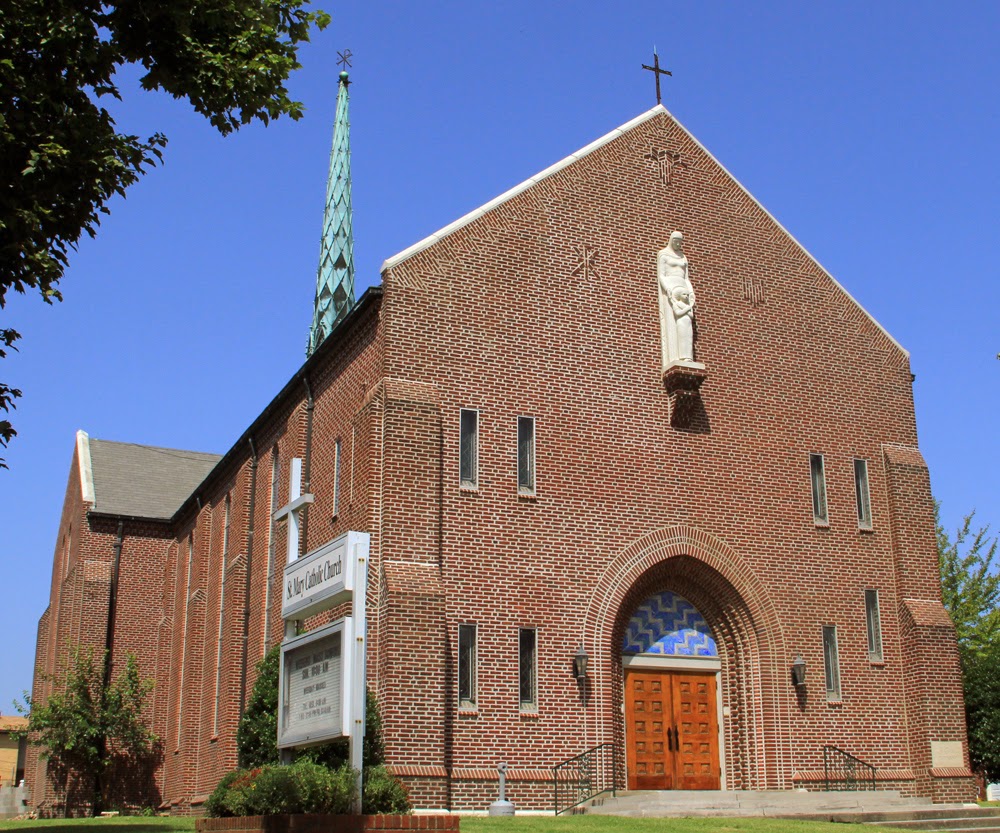 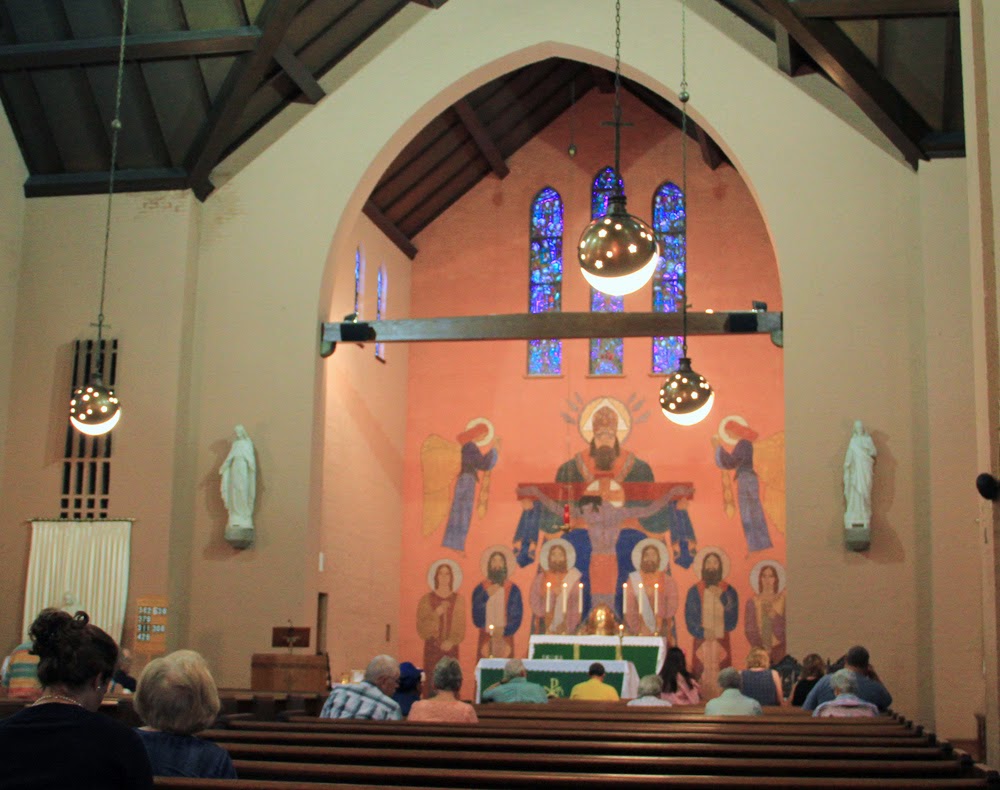 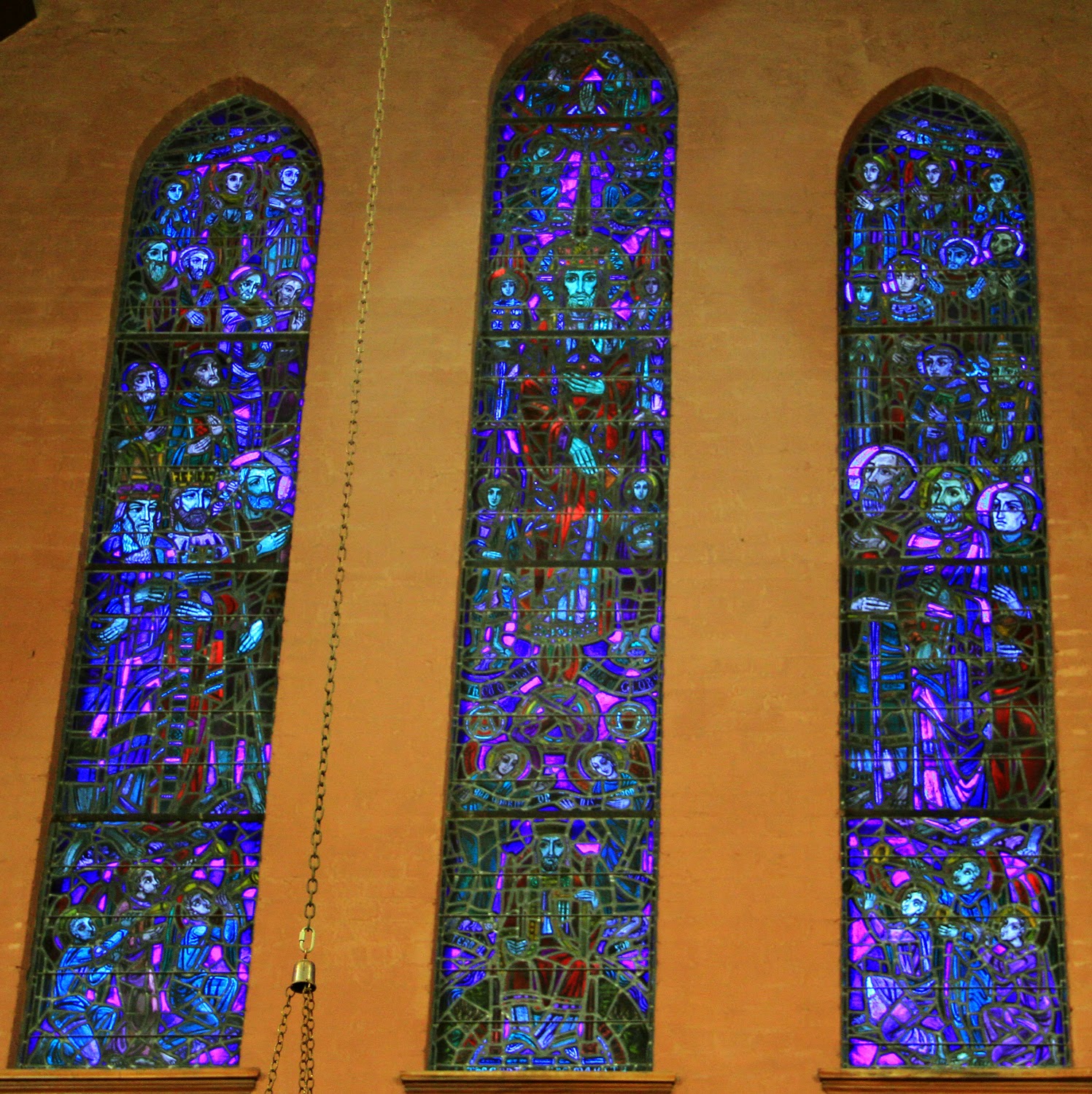 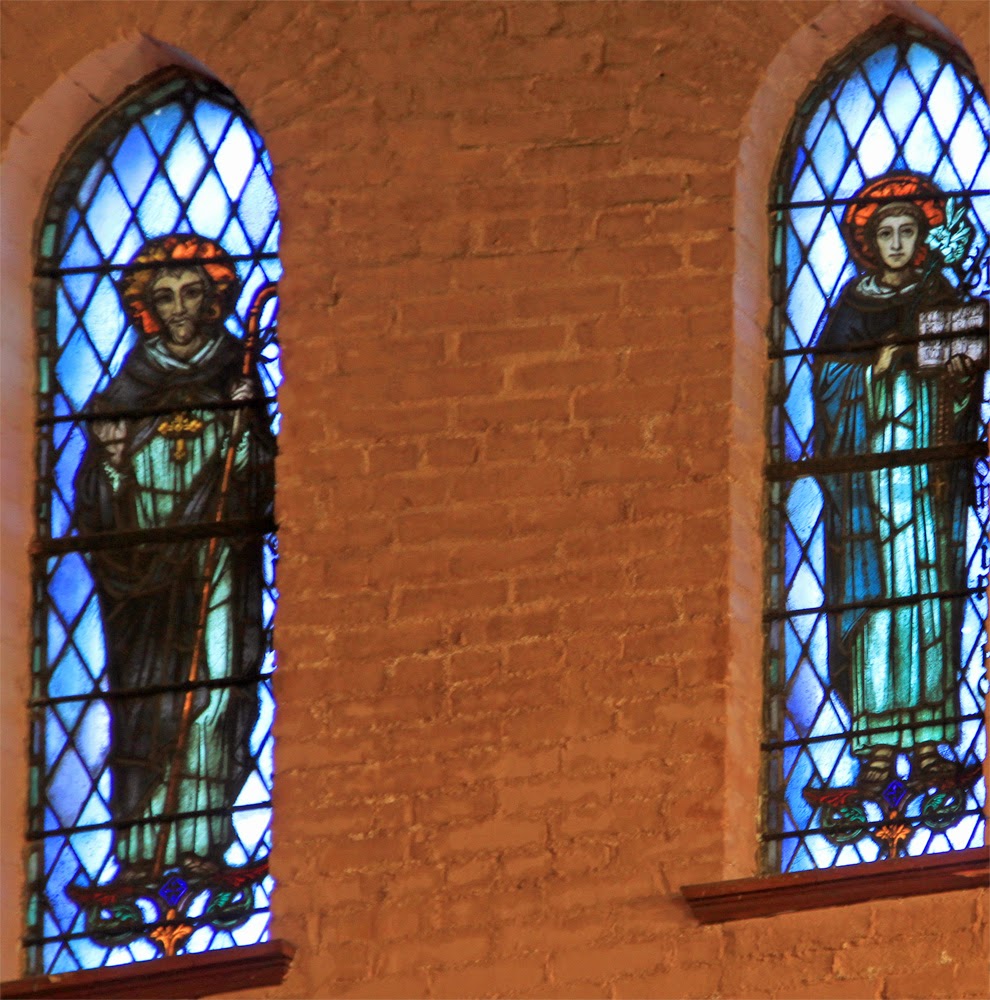 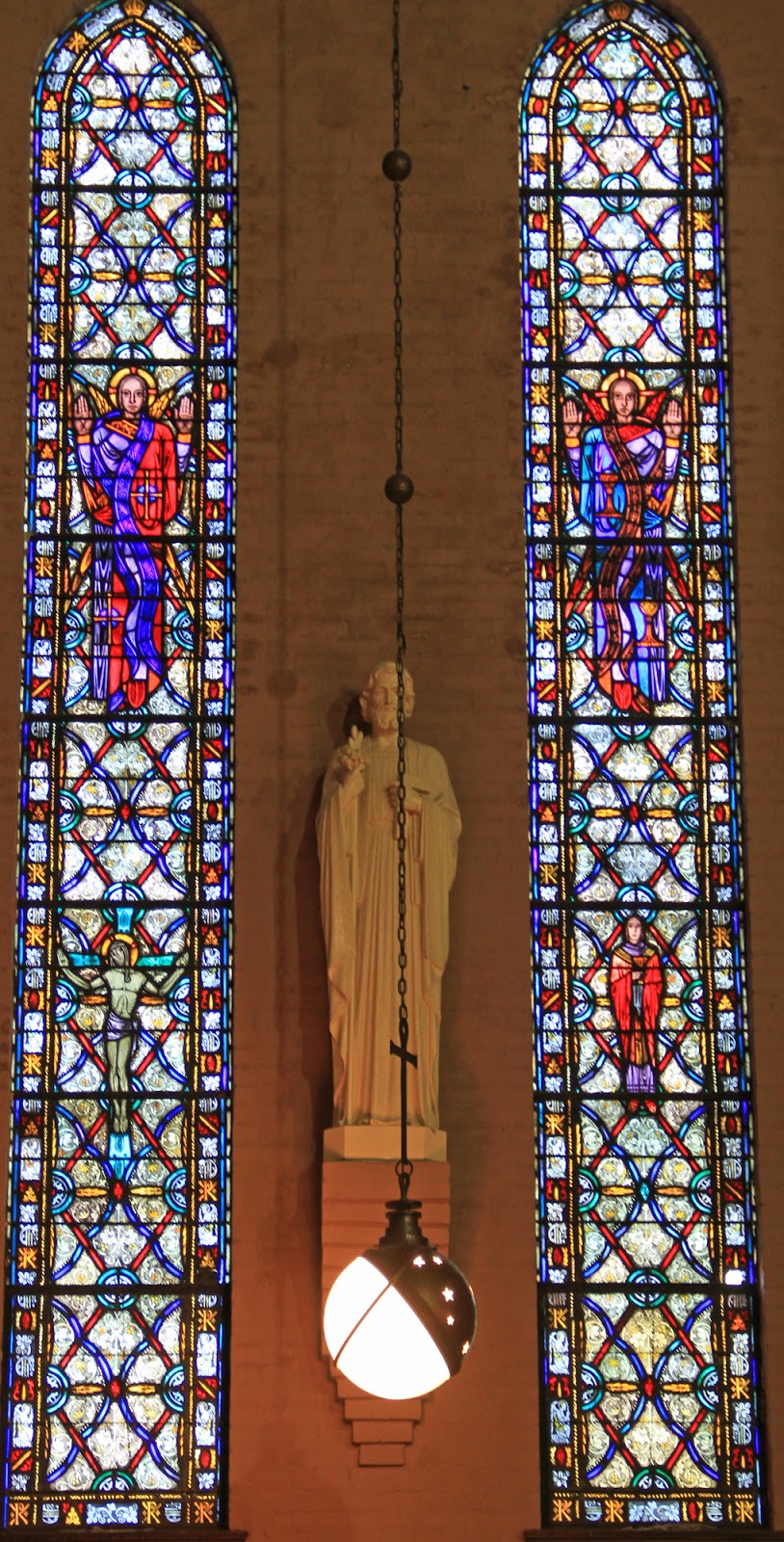 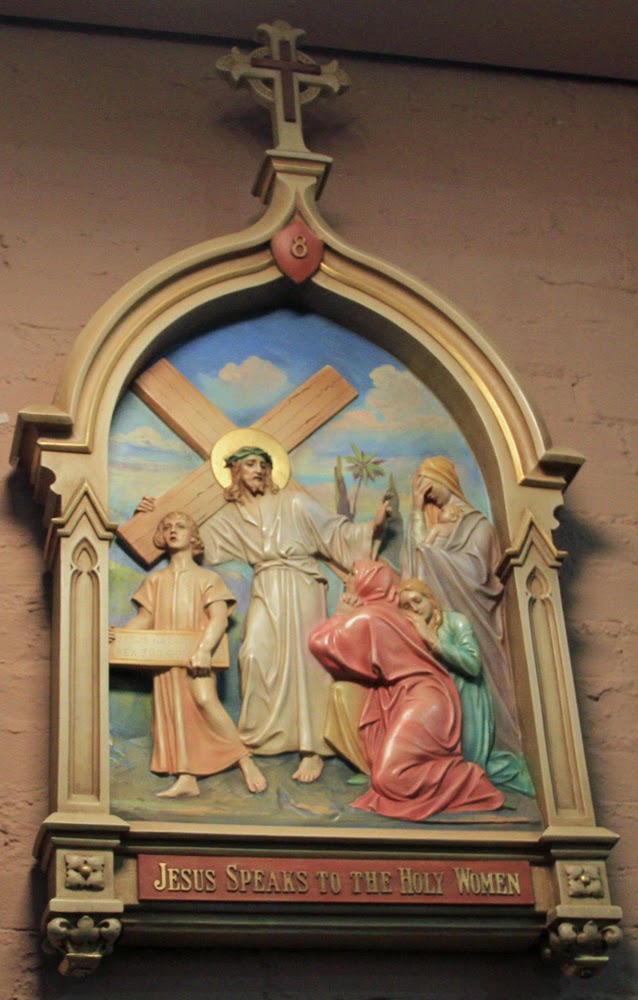 Link:
St. Mary - Helena (Click on the link that says Church Architecture...how Charles Eames came up with the design and the windows are described :) )
Helena West Helena (in case you want to go)
Posted by Tina aka Snupnjake at 8:41 PM