Hey All!  No I haven't quit going to Mass.  The week before I was in St. Louis and last week, I went to my territorial parish.

Guess what?  This weekend was the Feast of Corpus Christi.  According to one parish bulletin I read, there are big processions and celebrations in other countries (like St. Louis) for the feast.  After much searching, I did manage to find a Corpus Christi procession at St. James in Searcy, AR.  It's about an hour northeastish from Little Rock (on the way home actually).  St. James and its sister parishes, St. Albert and St. Richard, all came together to celebrate this Feast at one Mass at 4 pm.

Something interesting also occurred during Mass.  The parish has its first priestly vocation.  To celebrate the event, after the Homily, there was a big signing of the letter of intent with the Bishop, almost as if he were going to play football or something.  I've never seen anything like it.

Mass was interesting.  It took an hour to get to the petitions.  The main reason was that most everything was said in English and then repeated in Spanish or vice versus.  That's right.  I heard the homily 2x.  In English and in Spanish.  The Petitions, Procession of Faith and Our Father were in English.  The Eucharistic Prayer (II) and the closing prayer was in Spanish.   The beginning of the Liturgy of the Eucharist kept switching language.  I'm now more convinced that Latin is the way to go for the parts of the Mass that don't change every day.  I heard non native English speakers and non native Spanish speakers both speak the responses in the other language.  People can be taught.

The homily was given by the Bishop.
Like many of you, I'm dismayed by how our culture has lost its moral bearing.  There is no more living for other or for a higher purpose. Pope Francis talked about an economy of exclusiveness.  We put the self ahead of the family.  We repackage religion to accommodate me.  We want artificial contraception, easy divorce, abortion, and now same-sex marriage.  We have put self-interest above the common good.  We have hardened our hearts to the poor.  We act as if life is a zero sum game.  We have ignored the family as the basic cell of society and have made it instead the individual.  The Church is family.  Sacrifice for the common good.  The result is a religion that wants what is best for us (even if it makes us miserable).  We are building the Kingdom for God.  It is a win win for us.  We have an economy of inclusion (clearly the bishop hasn't been exposed to cliques...)  In the First Reading, we see how God provides.  The Hebrews survived because they obeyed God.  In the 2nd Reading, St. Paul tells us we are made one by the Body and Blood of Christ.  The Gospel tells us the Eucharist unites us and gives us Eternal Life.  In the Eucharist, Jesus provides and shows the path through the moral desert and idolatry of self.  Do not forget God who led you out of Egypt.  Society/culture says Catholics are out of touch. We are counter cultural.  The culture is sick.  Catholics are in touch with the Truth (some more than others...I feel like a comment about truthiness would be good here).  The Lord feeds us to make a difference.  We are called to bring God's Salvation to others (one facebook argument at a time).

One thing I did notice was that the altar servers acted as the ushers for the collections.

The Corpus Christi procession was really nice.  There were Knights and flags and girls in white dresses throwing flower petals.  We walked around the church to an altar set up in a field and then walked back.

The people were really nice!  They invited me to a potluck supper.  It was yummy.

Pictures:  I have more of the windows.  I'm just really tired.  I'll post them soon. 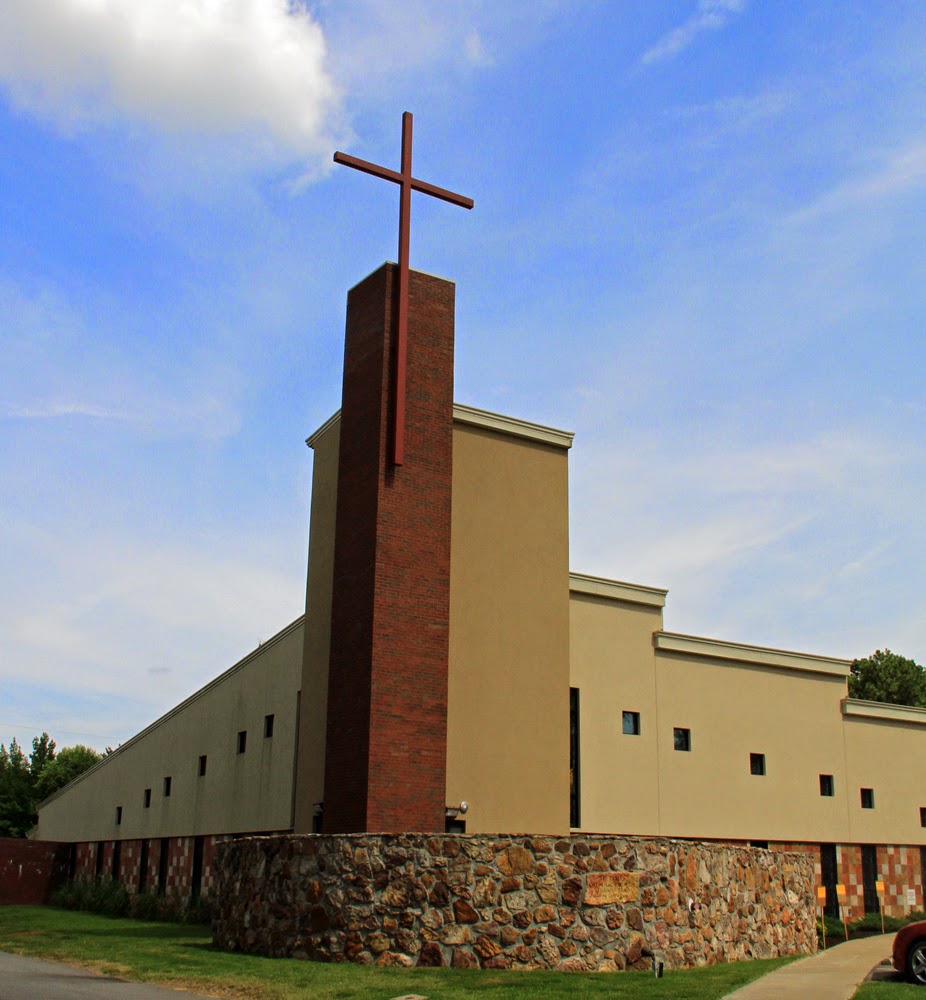 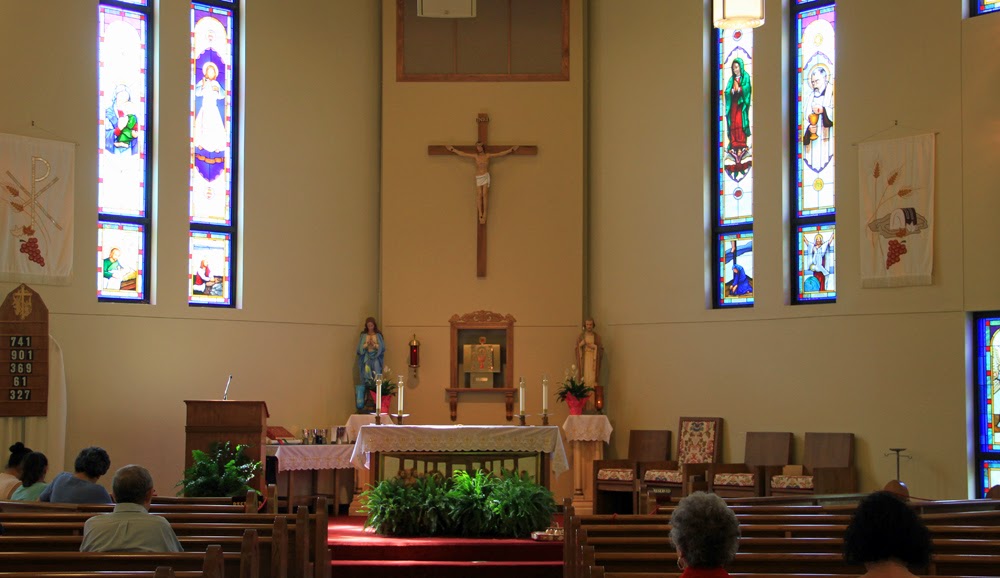 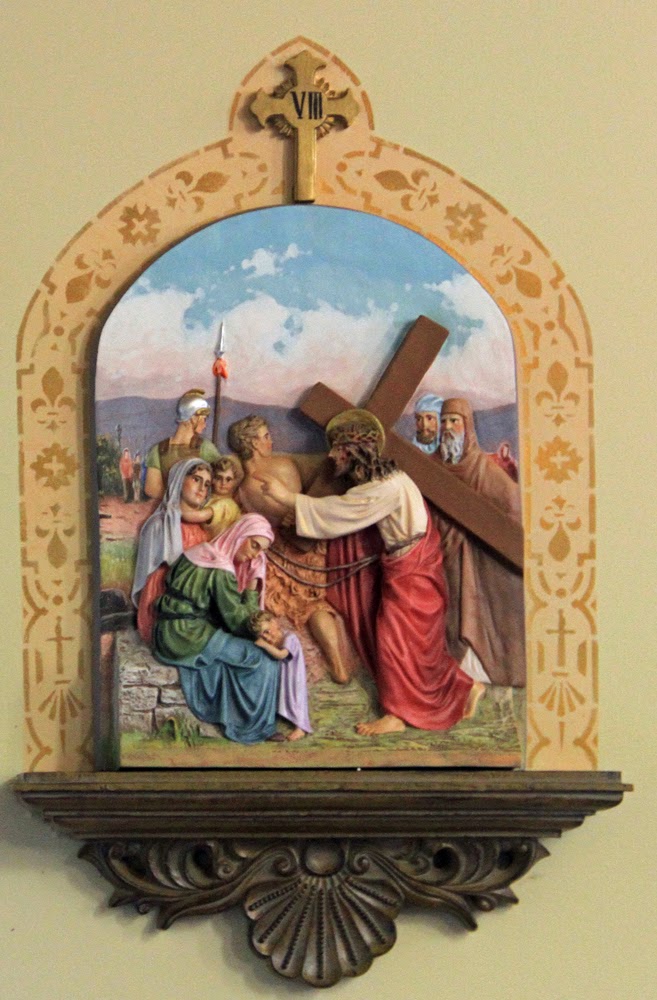 St. Raphael
This is a rarity! 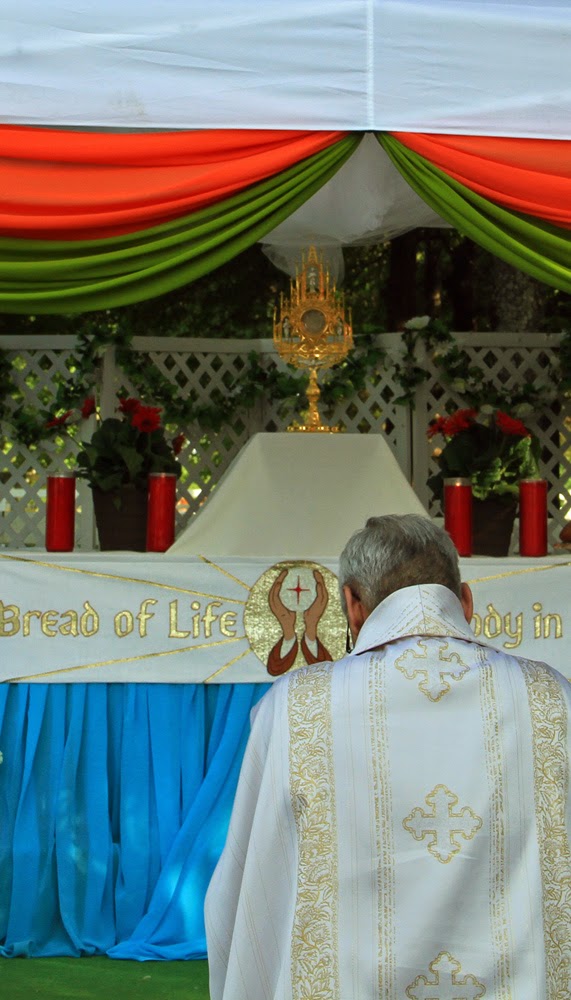