I had wanted to go out far today for Mass but Noah floated by yesterday and it was a grey, depressing day, so I stayed close to home.  And discovered I need 4 new tires (apparently...I've worn out my tires visiting churches....)

I headed up to North Little Rock and St. Anne.  It's another church that is right on the outskirts of the Air Force base.  It looked pretty decent sized on the outside, but it was tiny on the inside.  It really had the feel of a church hall more than a church.  They were trying but it just felt cramped and basementy.

Music was provided by a cantor playing guitar.  In a strange twist, it sounded like most of the parishoners were singing.  I kid you not.  Men, not the cantor or the priest, singing in church.  It's so rare that I'm remarking on it.  And on that note, the responses were said by everyone and rather loudly.
Opening:  Ready the Way...Ready the Way of the Lord (Thinks this is a Taize prayer...and Cantor went over it before Mass with everyone, even though they sang it last week...see new music can happen!)
Offertory:  Here I Am Lord
Communion:  Taste and See
Closing:  O Come O Come Emmanuel

Father gave us a mini homily before the Penitential Rite.  Basically we should not be afraid and be obedient to the Faith.

When the First Reading came, Father explained the Reading before the Reading.  Strangely he didn't do it for the 2nd Reading or the Gospel.

Homily:
There are two phrases in today's Readings that stand out:  Do Not Be Afraid and Bring About the Obedience of Faith.  In the Gospel of Matthew, Joseph is followed.  He is visited by an angel 4 times.  Joseph gets up and does what the angel says.  The angels come in times of crises.  Every time an angel comes, the angel says "Be not afraid."  Joseph does what the angel says.  Fear is very powerful but natural.  It is healthy when it gets you into action.  But it can be paralyzing and can push us into denial. All those fears.  Be not afraid.  I am with you.  It is why we have small church groups for support.  We have to get up.  At the beginning and end of Romans, Paul reminds us to be Obedient to Faith.  What do we believe in?  It must be acted upon.  Christ is present among us.  God is present to us in our lives. We must be the Love of God in the world.  Not as slaves but as beloved.  Trust in God.  Ahaz is afraid and decides that he must ally with his pagan neighbors.  But the problem with that is that the pagan stuff will creep in.  Ahaz represents us when we do the opposite of what God wants.  There is a pornography problem.  (I'm up!  I'm awake!) Pornography distorts our sexual gifts.  We need to wake up. We can stop our old habits.   (I'm a little confused as to how pornography relates to the readings but hey, I'll cut Father some slack for mentioning it and for tackling such a topic.)  Ask the Lord to make us like Joseph and to recognize the Ahaz in ourselves.

At the petitions, the last petition invited us to name people we should pray for.  Father used Eucharistic Prayer III and there were bells.  At the end of Mass, Father invited people who were visiting to stand up and introduce themselves.  (Don't worry...I blended into a wall.) Then it was birthday time. 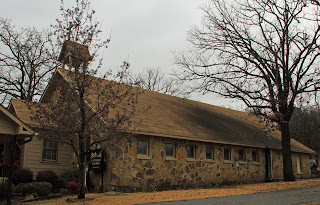 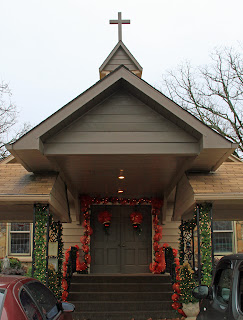 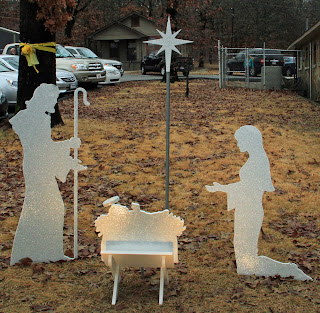 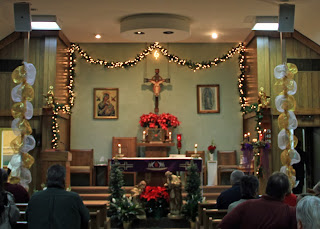 View From the Back Pew!
What is with all the netting ribbon?  (Stuff wrapped on poles)
It's the go to decorating item. 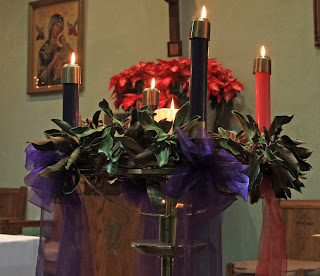 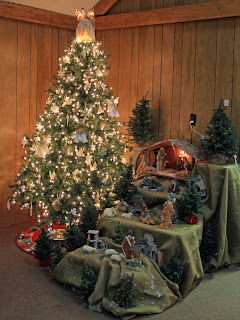 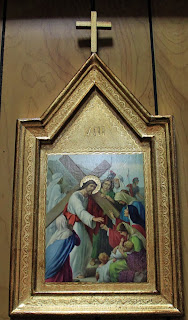