Good Evening.  My hand is out of the cast (YAY!) but in a dorky splint (BOO!)

This morning I attended the 10 am Mass at St. James in Catawissa.  I keep thinking it is a wine, but have been informed thats Catawaba.  St. James is a small wood country church and rather quaint.  It seems bigger on the inside.

Music was accompanied by an organ or piano from the choir loft.
Opening:  Praise to the Lord
Offertory:  Mary, Full of Grace
Communion:  We Have Been Told
Closing:  In the Day of the Lord

The first reading was from Proverbs about how to be a good wife.  I took notes :)

Father's homily focused on the new translation that is about to roll out.  He said it was a good thing because it will help us focus and pay attention and be more prayerful.  He also explained why the translation was happening.  He then went through each of the changes.  At first I was like really, do we really need to go through this and then I thought about how I offered to explain a Latin Mass to a group and realized I barely knew what was happening and usually didn't know why and then I thought about how I would be hard pressed to explain anything deep about the Mass I attend to someone not Catholic.  So maybe we all need reminders from time to time.  The biggest change is the "And with Your Spirit"  We are inviting the Holy Spirit to come into us, like a temple.  Once it was explained, I was like oh.  Originally I thought it was silly especially since the only reasons I had really been given was that it is a more accurate translation.  Now it makes sense.  Father also explained the function of liturgy was like an orange peel..to protect the fruit inside.  The Liturgy protects the Mystery.  The Confiteor is a powerful statement of Faith.  Basically Father said that we were going to take it slow like wine and cheese before dinner.

Father used Eucharistic Prayer III and bells.  It was a nice Mass. 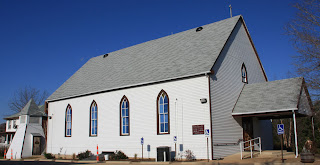 St. James
(not sure which one) 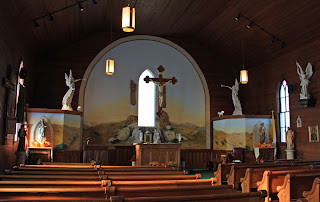 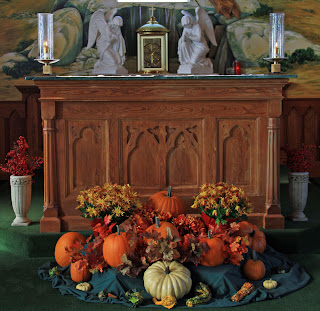 Altar
with vicious pumpkins.
I hope they are repenting.

St. James
Guessing Zebadie...one of the sons of Thunder 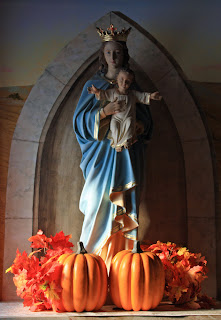 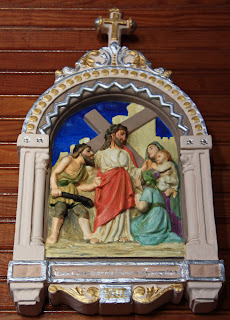 Links:
Website of St. James
Pictures from Rome of the West