Happy Monday!
Sorry my post is late.  Some friends from out of town came in and I've been playing tour guide.  In honor of my friends, I went to St. Richard in Creve Coeur.

St. Richard was built in 1965 and is a more modern design.  It's in the shape of a square.  The Sanctuary is in a corner with the pews fanned out around, essentially around the diagonal.  There are four huge stained glass windows, with one on each wall.  The Stations of the Cross are actually inset into the wall.  Although the Church was a little sparse decoration wise, I rather liked it.  There were lots of late comers to Mass this day.

The music was accompanied by a piano, with the musicians and choir in a corner off to the side, rather than in the front.
PreMass:  The Lord Hears the Cry of the Poor
Opening:  Praise to the Lord
Offertory:  Though I May (unsure...it was a solo by the cantor)
Communion:  Here I Am Lord
Closing:  Lead Me Guide Me
The Gloria was rather jazzy.

Father started off his homily referring to Lebron James and how he has an exaggerated sense of importance.  In the Letter from St. Paul, St. Paul spells out the importance of the Lord.  He answers who Jesus is.  Jesus is the greatest.  (Thought that was Ali).  Father then moved onto the Gospel and why the first two men passed the victim by.  Father explained it was likely that the priest and Levite were on their way to the Temple and it might be their only chance in life to serve at the Temple.  If they had helped the victim, they would become unclean and wouldn't be able to serve.  Father then moved on to the question of Who is my neighbor and how Jesus answered it.  Jesus' answer was so radical because the Jews only thought other Jews were their neighbors.  Father than talked about immigration.  We see the immigrants not as neighbors but as bad people.  It is a problem but we can fix it.  As Catholics, we have to face this issue.  The country the people are coming to and the country they left both have rights and responsibilities. See here in the Catechism.  Father referenced Archbishop Burke, who used to be our Archbishop, but is currently at the Vatican on the court.  Father then told a story about two churches.  One church celebrated their Jubilee with dancing and partying while the other church celebrated by feeding those in need.  The challenge for us is to go and do likewise.

Father used Eucharistic Prayer II and there were bells at the Consecration.  There was a lot of hand raising at the Our Father.  It was a nice Mass.  My only quibble was that during the intentions, the Deacon read every single name off the parish sick list, which was most definitely over 20 people.  I have no problem praying for the sick of the parish, it was just really long and I wonder how many people pay attention... 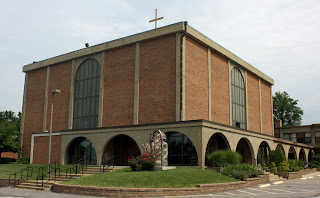 St. Richard
The Square beyond Compare... 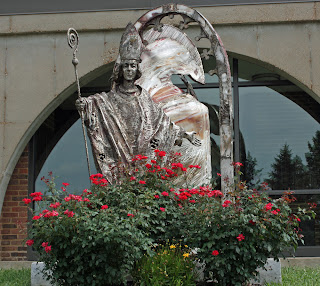 St. Richard going through a door...

Painting of the Holy Spirit 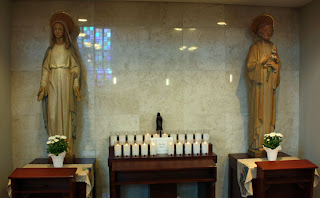 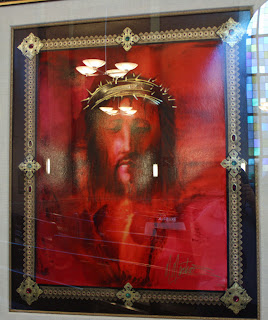 Painting of I think Veronica's Veil
(Sorry about the glare) 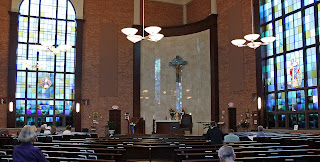 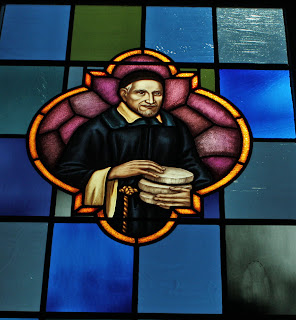 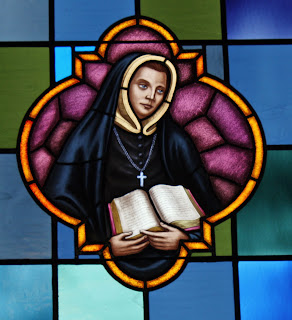 St. Rose Philippine Duchesne
One thing I really liked is that the Church had signs under each of the window,
informing one of who the saint was and a little blurb about them. 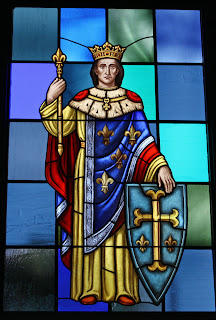 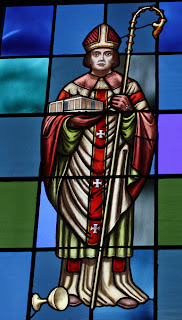 St. Richard of Chichester
I'm curious as to the cup on the ground.