I have to say straight up that although it was a cute little church, the Mass was rather depressing.  There was no music and Mass took 36 minutes.  In other words, it took me nearly 3x the length of Mass to get there...  I can't remember the last time I went to a Sunday Mass and the priest, in the absence of musicians, didn't attempt to sing the Alleluia.  Also, I thought on Sunday, if there was no music, the Entrance and Communion Antiphons were supposed to be read or used.  Which makes me wonder why there are antiphons if they are never used...

The church was packed with people needing to sit in the choir loft.

Father started his homily off by mentioning how life is getting busier and faster (like this Mass...but I digress).  As life has gotten busier and faster, it seems as if we have lost things, like entertainment (uhm..the Internet entertains me...I'm thinking that's not the word form Father wanted...but rather wanted the art of entertaining or some such) and being a gracious host. In the First Reading, Abraham was shown to be a gracious host.  In the Gospel, Martha doesn't spend time with her guest, Jesus.  The Lord wants to be a guest in our house in us.  Why aren't we prepared for our guests, for Jesus?  Why all the excuses?  Excuses are for bad hosts (YES! I knew Jesus didn't want me to clean my room but rather hang with Him).  At some point open the door for Jesus.

Father used Eucharistic Prayer II and there were bells at the Consecration.

I have one minor little quibble.  I was reading the bulletin and noticed that the parish is selling "Catholic Household Blessings and Prayers"  (I would have bought a copy had I known...).  The blurb in the bulletin mentions that you may be given a religious item, such as a rosary or medal, you would like to bless and can use this book.  Rosaries and medals are sacramentals and must by blessed by someone who's taken Holy Orders.  I'm thinking it is just a bad example because three lines above the example, the blurb mentions that only the ordained can bless things that center around the ecclesial and sacramental life of the Church.  I could be wrong I guess, but if who blesses a rosary is not all that important, in that I could do it, why is it such a big deal to have a rosary blessed by the Pope or by a
Dominican?

I'm still curious as to which Mary the parish is named after.  I don't think I've ever heard of Mary, Mother of Jesus referred to as a saint, so I'm wondering who the parish is named after...
Update:  Okay apparently it is common to name Mary as a Saint.  As in St. Mary of Victories and such.  I always thought Mary was kind of above the title of Saint, being Queen of All Saints.  So when I hear of a parish named St. Mary, Our Lady is not the first person I think of and don't make the connection. 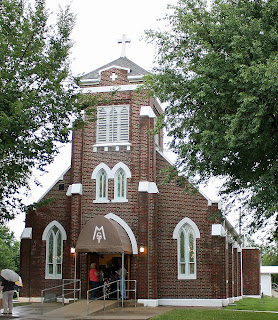 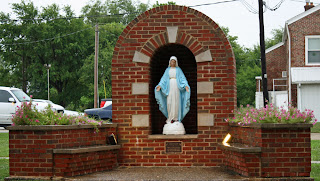 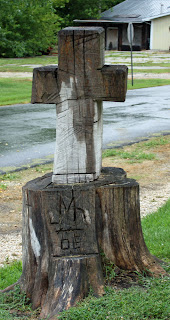 This was on the side of the church. 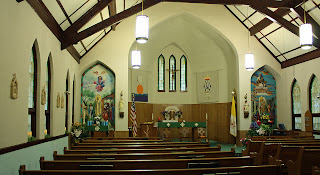 View From the Back Pew!
13 pews down a side. 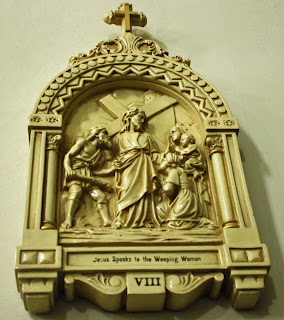 The Eighth Station:
Jesus Speaks to the Weeping Women 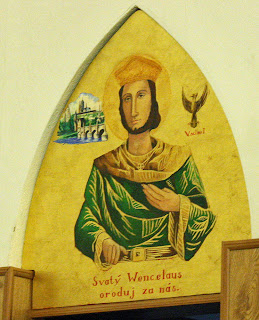 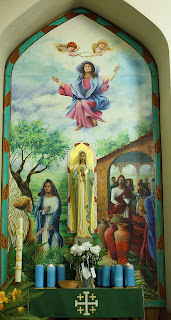 Mary
I see the Annunciation, the Wedding at Cana, and the Assumption.
I'm a little confused why Mary is being crowned with thorns though 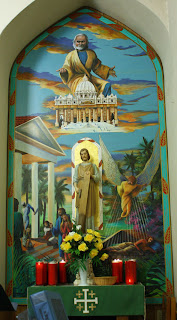 St. Joseph
I'm not sure who that is above the Vatican.
If that is God, I'm rather scared...
PS For those of you who are interested, I'll be doing an update the first week of August, to celebrate 1 year of church hopping!  A little tease:  I've only heard "Gather Us In" 7 times...