Other people go to Memphis to Graceland.  I went and saw churches.

So one of the reasons I have quit going to Mass is that I feel like I don't belong and I don't fit in.  What happened at this church on Sunday really emphasized that feeling.

I'm not from Memphis.  I'm not a parishoner.  I pull up to Church and for some reason don't see the main door.  I do see a bunch of people going in the side door.  No problem.  I'll just follow them.  I end up in a hall of some sort.  I see a deacon (gray shirt with collar...)  I ask him how to find the Church.  He asked me "Why do you want to know where the Church is?"  Uhm.  I'm sorry.  I thought it was pretty obvious.  Mass. (Yes I lied.  What was I supposed to say?  I'm going to take pictures and then snark about it?).  He finally did give me directions but I was floored.  I had heard they were hostile to Catholics in the South but I didn't think they were hostile to Catholics in the Catholic Church...although given some of the comments on blogs and how some parishes interact, perhaps I shouldn't be so floored.  Let's just say that to get me to stay in the Church for Mass would have required the Holy Spirit to come sit on me after that.

The Knights of Columbus were there for First Communion.  One of them was really nice and gave me a quick tour of the Church. 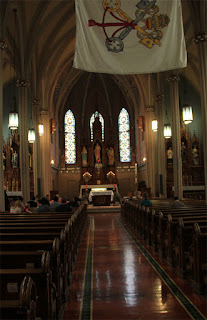 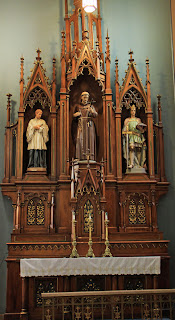 Side Altars
That would be St. Louis there on the right. 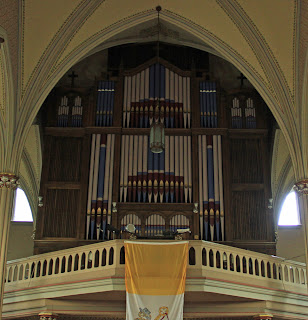 Hey It's Painted Organ Pipes...
It must be a German thing.

Stained Glass:  I'll give you 3 guess as to what company made the windows but if you are from St. Louis you should only need 1.  They came to Memphis on paddle boats! 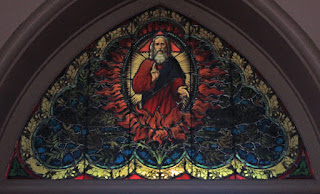 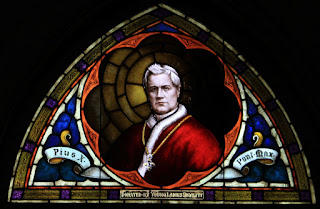 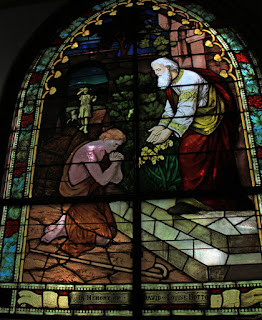 The Prodigal Son...
This was in a cry room so the angle is funky. 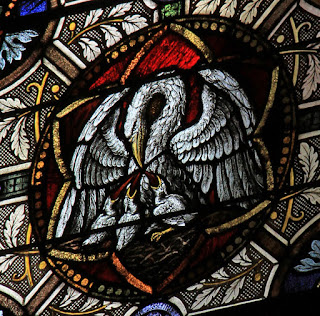 I don't know who this is.  The Scroll says:
Pot?? Decuit Ergo Facit 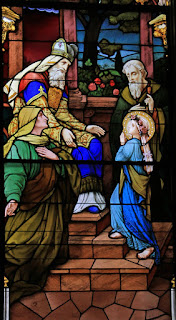 Mary at the Temple

Marriage of Mary and Joseph 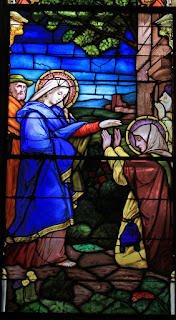 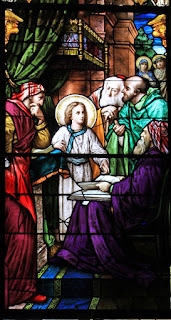 The Boy Jesus in the Temple 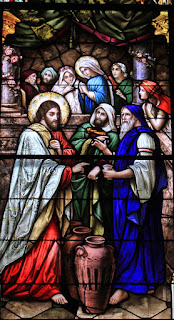 The Wedding at Cana 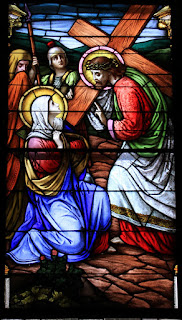 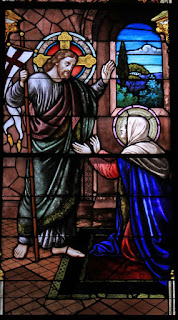 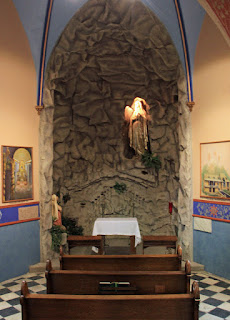 
Link:
St. Mary in Memphis, TN
Posted by Tina aka Snupnjake at 8:44 PM