I attended the 11 am Mass.  This was the contemporary music Mass which I discovered as I pulled up as the message board outside was advertising it.  St. Norbert is a modern church and almost in the round.  Where the tabernacle should be, is where the band was.  I did stumble across the tabernacle in a side chapel area.  Mass was pretty full and multi-ethnic.
Perhaps the strangest thing I saw was the big video screens high and off on the sanctuary.  The video screens had welcoming messages on them.  When Mass started, the lyrics for the songs appeared on the screen.  At other times, there was a picture relevant to the day displayed.  I'm rather surprised the words to the Nicene Creed, the Our Father and the Mass Setting did not appear.  This is what it looked like: 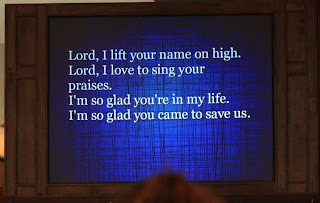 I wonder how those with visual impairments handle this.  Also, I don't know this song so I would need the hymnal because that's where the music is!  Amazingly, last week Deacon Greg wrote an article about just this thing.  Honestly the first thing I thought of when I saw the screens and realized they were being using was to pray that the homily was not a powerpoint.  I think that would have driven me to the EF Mass faster than anything.
The music was accompanied by a band and was contemporary.  Well somewhat contemporary.  The Responsorial Psalm was chanted and the Mass Setting was not contemporary either.
Before Mass:  How Great is Our God
Gathering:  Lord I Lift Your Name on High (I'm not sure the lyrics are Catholic)
Offertory:  Fish With Me
Communion:  The Lord is My Light and My Salvation
Closing:  Go Make a Difference
The first two songs I hear on The Message on XM Radio.  I don't know how I feel about songs used by Protestants in a Catholic Mass.  I was honestly waiting for people to put up their hands and start swaying.  For one opinion about Praise and Worship music at Mass see this article.  Comments from the Deacon's Bench are pretty interesting as well.  I don't know.  I like contemporary music.  I like chant.  But what I really like is Catholic!  I want the music at Mass to be Catholic.  I don't want to sit and think is that music an accurate reflection of what the Catholic Church believes?  Or worse be confused.  Mass should be different? timeless?  I shouldn't be bopping to the same thing on the radio as in Mass.  I'm not sure that makes sense.  Mass should be set apart?
The Deacon gave the homily.  He was outside the sanctuary and walked back and forth.  Jesus came to Earth like us.  Ascension is what we hope to become.  Jesus became one with the Father.  What does this mean for us?  We have doubt, but God will be with us to the end of days.  We all strive for Heaven.  Going to Mass on Sunday is not enough.  We must become Christ for others. Catholics think they are better than other Christians but we are not. (I'm not sure where he was going with that.)  Most of the homily focussed on a story about shopping at Sam's and how the Deacon hated it and was a terrible representative of Christ.  But now he loves it.  (I probably did not pay enough attention.  I was incredibly distracted.)
Father used Eucharistic Prayer III and there were no bells.  There was hand raising and holding at the Our Father.
Mass was fine.  It was a typical suburban parish Mass.
Pictures: 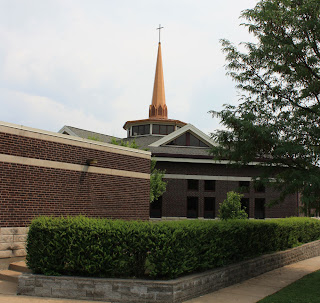 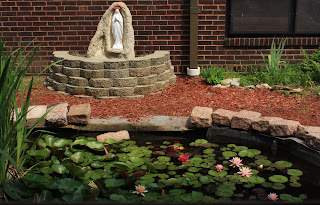 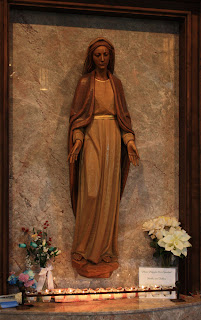 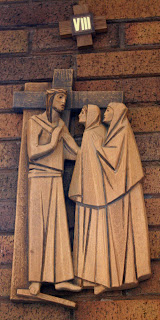 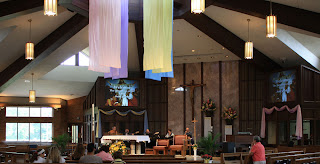 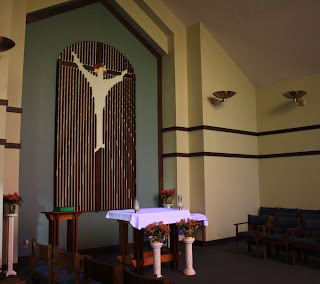 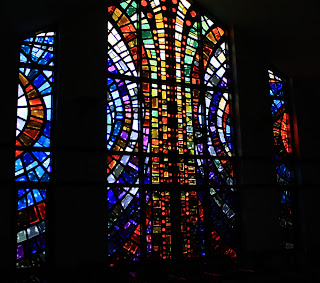 Stained Glass at back of Chapel 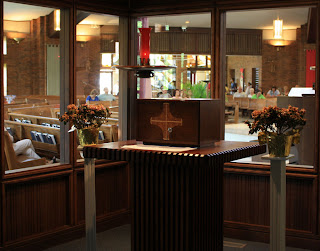 Misc:
1.  I broke the lens I use to take the majority of these pictures.  I cracked the mount.  It still works but I don't know for how long.  I did order a nice new shiny bigger lens.  If you'd like to help a poor starving grad student pay for said lens (and a tripod!) drop me a line :)

2.  A couple people have recommended Opus Dei to me, especially Women's Night of Recollections.  I can't find anything out about it.  Google has failed.  However, some of my more liberal associates have concerns that Opus Dei is a cult or cult like.  I'd love to hear your thoughts either way.
Posted by Tina aka Snupnjake at 10:17 PM