The visiting of parishes named after St. Joseph continues.  Today (3/20) I attended the 11:30 am Mass at St. Joseph in Imperial and it turned out to be the LifeTeen Mass.  I'm not sure what LifeTeen is, but I can tell you that the LifeTeen Mass was lacking teenagers.  There were baby boomers rockin' out again and the LifeTeen minister (she had a t-shirt!) waved her hands in the air like it was a concert instead of oh I don't know, a Mass, you know, that sacrifice thing, Jesus etc.  But that's okay...cause the teenagers that were there were dressed like it was a concert.  Wait scratch that.  One was barefoot.  You'd have to be incredibly stupid to go to a concert barefoot.

The current church was built in 1998 and is a semi-circle.  The earlier church used to be in the center of Kimmiswick or Imperial.  I found 4 windows from the old church incorporated into the new church which I thought was awesome.  The pews in the main nave were cushioned, while the extra pews in the back were not.  That's an incentive for getting to Mass early if I ever saw one.

The priest was not the regular pastor but a Redemptorist priest.  He just appeared on the altar.  There may have been a solemn procession but the teenagers in the back were so loud, it wasn't very solemn...

Music was supplied by a rock band.
Entrance:  None
Responsorial Psalm:  103 (Instead of 33 or 51, 91 or 130)
Gospel Acclamation:  Word of God Reigns and Speaks
Offertory:  Give Us Clean Hands
Communion:  Change Our Hearts and Better is One Day
Recessional:  Your Grace is Enough

After Mass started, Father had us all introduce ourselves to our neighbors. Father used Eucharistic Prayer II and there were bells.  Oh and Father forgot to name the Pope in the EP and then asked us who our Archbishop was.

Hey did you know today's Gospel was about the Transfiguration?  I wouldn't know it from Father's homily.  Father started off with a story about his first homily and how he was so nervous he forgot.  Then he was so nervous he knocked the ambo over and fell into the front pew on some poor woman.  Then it was question and answer time about why we come to Mass.   We come to Mass to pray, to honor, to learn, to receive, to roll our eyes at the homily, to make snarky comments.  Oh wait.  That's me.    Father then told another story about falling into a woman.  (Uhm.  Father might want to curb these stories...)  He then wondered why he wasn't falling into women before he was ordained.  (oh dear...)  When you make the Sign of the Cross, the vertical piece represents the relationship between you and God.  The horizontal piece represents the relationship between you and your neighbor.  We should listen to God (God needs to get on facebook....)  Kids, if you want a Wii, you should listen to your parents.  You can't go wrong.  If you listen to your parents and things go wrong, it's not your fault but your parents.  It's a win-win for you.  Father ended his homily by mentioning a prayer from St. John Nepomucene Neumann 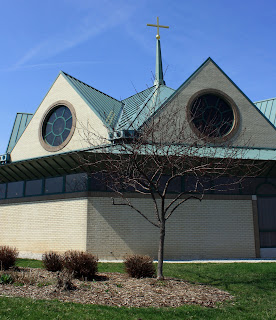 St. Joseph
I can't decide if he's stoned or has shifty eyes. 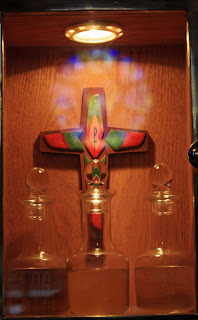 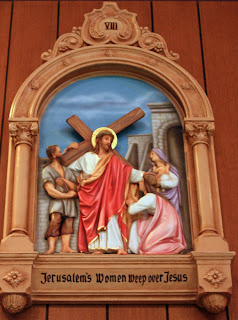 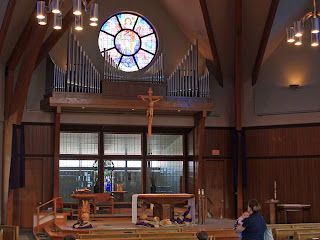 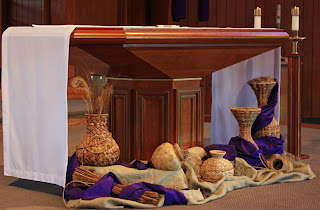 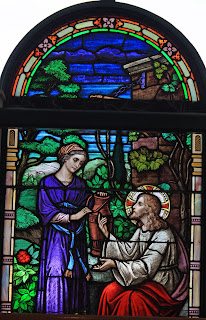 Jesus and the Samarian women.
I think. 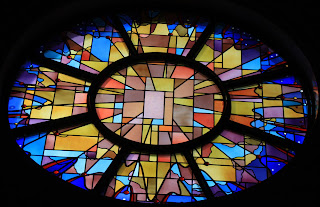 In the Beginning There was the Word...
or Creation
I got nothing. 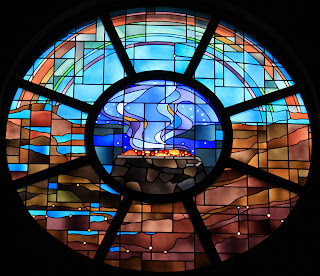 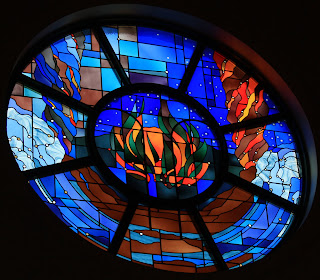 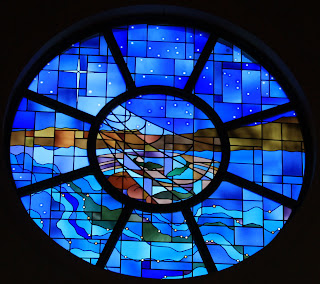 Loaves and Fishes?
Fishers of Men?
Anyone? 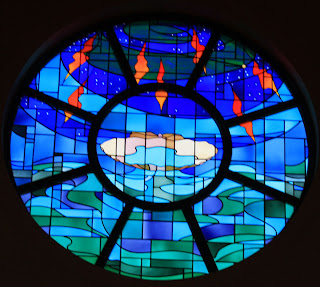 Baptism?
Pentecost?
I see the seashell but why is it raining fire. 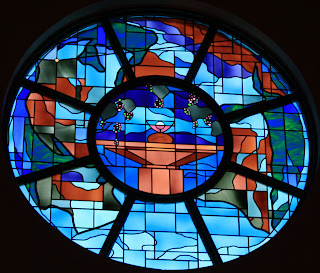 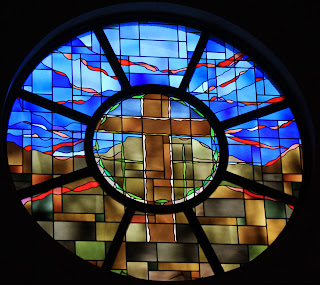 Crucifixion
Now, before you see the next window, I want you to scroll up and look again at the Jesus windows.  Notice the hair.  The hands. Got it fixed in your mind? 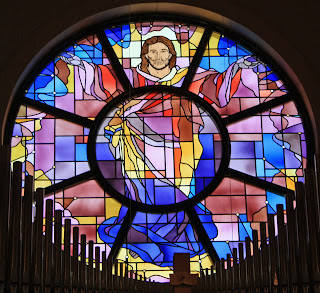 Jesus!
He's got some zombie hand disease!
His hands are turning to stone!
And he's got rock star hair!
Woot!
(Needless to say, this staring at me all through Mass did not give me the warm fuzzy Jesus is my homey feelings)

Links:
Website of St. Joseph
Posted by Tina aka Snupnjake at 10:51 PM