Hello!  I was entertaining an out-of-town guest so after much discussion, a consensus was reached to attend the 9:15 am Mass at Little Flower.  One tiny detail:  it's a traditional Latin Mass.  This would be the third old Mass I've attended.  I'm getting a little better at following along, but if I stop paying attention I get lost really quick.  My Latin however, is horrid.
Little Flower is a Church in the round, with the altar in the center.  It was interesting that nearly everybody chose to sit in the pews that made Mass ad orientem (priest faces liturgical East).  There were hardly any windows.  The windows were small stained glass circles at the top.  There were lots of statues as well.
For music there was a small choir and an organ.  The music:
Opening Hymn:  Come Thou Long Expected Jesus
Mass Setting:  Mass XVII
Offertory:  Hail Mary
Communion Motet:  O Sacrum Cor Jesu
Closing Hymn:  Creator of the Stars at Night
Father's homily focused on today's Gospel from Luke.   Luke gives some background.  John the Baptist's preaching about baptism is not the same as our Baptism.  What John the Baptist was doing was more similar to a Penance Service.  The message from the Gospel is to make straight the way of the Lord.  We need to perfect our lives.  We need to renewed with the joy of His Coming.  It is the Greatest Gift of all time.  The homily was pretty short.  I had a difficult time hearing the homily because I managed to sit in front of the heating vents and they kicked on during the homily.
Pictures: 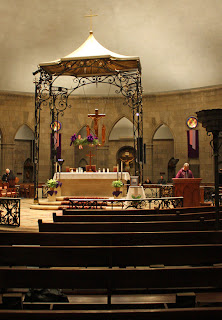 View From A Back Pew! 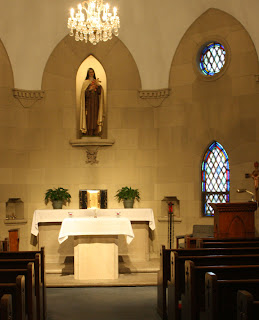 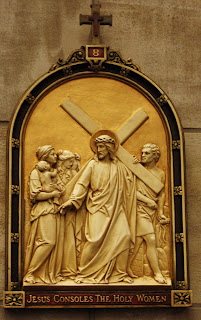 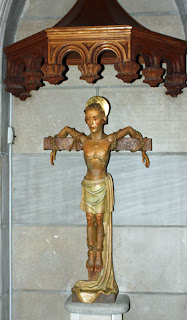 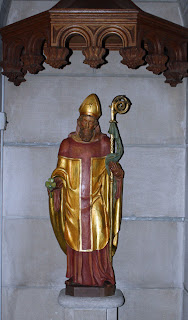 St. Patrick
Links:
Website of Little Flower
Exterior and Interior Pictures from Rome of the West
Posted by Tina aka Snupnjake at 11:58 PM