Ahoy me mateys! (It's International Talk Like a Pirate Day! alas no parishes named after Our Lady Star of the Sea...)  I journeyed to St. Lawrence in Lawrenceton MO and attended the 8:30 am Mass.

St. Lawrence is a smaller church that still has the high altar, which was awesome looking.  The kneelers were really hard though.

The choir was in the choir loft.  The music was accompanied by a guitar.
Opening:  Praise to the Lord, The Almighty
Offertory:  One Lord
Communion:  The Supper of the Lord
Recessional:  Lord Whose Love in Humble Service
Mass Setting:  Mass of Creation (Gloria was spoken)

Father used the full Penitential Rite and used Eucharistic Prayer III.  There were bells at the Consecration.

In case you missed it, for the last couple Sundays, the Archdiocese has been pushing stewardship, with the culmination being today, Stewardship Sunday.  In his homily last week, Father focused on the Work of and for God.  As part of his homily, Father read the letter from the Archbishop.    This week Father focused on the letter and what was learned at the Convocation (the Archdiocesan priests were retreating last week).  We need to be good stewards of God's things.  The struggle is in the little things.  Most of us aren't out committing big sins but are committing little sins, like lack of charity (whistles and looks semi-guilty)  We need to be building a habit of good rather than building a habit of bad.  Some depressing news from the convocation:  in 5 years 30 pastors will be at retirement age, in 20, half of the pastors will be at retirement age (75).  (I have a suspicion we haven't reached that replacement rate.)  Which leads to the next depressing thought, parish closings/mergers.  Although nothing was *said*, Father chatted about what a vibrant parish was as discussed at the Convocation.  There were seven marks of a vibrant parish.  The parish should have a strong Sacramental presence (I'm guessing this means more than 15 minutes a week for Confession....).  Seriousness of prayer and spirituality (does squishy spirituality count?).  Does the parish have strong devotions and does it have Adoration?  Does the parish have good Catechesis and an RCIA?  How are we doing with evangalization?  How are we taking care of our resources (the money, the parish plant, etc).  How are we doing with charity and social justice?  Do we do things for the poor, pro-life, laws, etc?  And finally, is the parish supporting vocations and the call to religious life?  Apparently, Archbishop Carlson promised a parish at one of his former dioceses that he wouldn't close them if they produced two vocations to religious life.  Needless to say, the parish managed to dig up/produce 2 seminarians.  So a note to the parishes...extract a promise and then encourage those vocations!  (Perhaps a friendly competition is in order....).  Father ended his homily by reminding us that we are all co-workers in the Lord's vineyard.  We need to begin each day with a prayer asking God what He wants us to do today.

The parish seemed really friendly.  After Mass, I spoke with some long time parishoners.  I mentioned how nice it was they had the high altar still and somehow the talk turned to the Latin Mass.  I told them that under Summorium Pontificum (or whatever it is) all they had to do was ask, since they have a right for it.  ;)  They did say the music was lovely in Latin.  So who knows, maybe one day there will be a Latin Mass down in that neck of the woods! 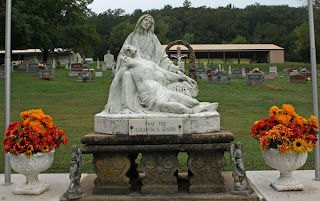 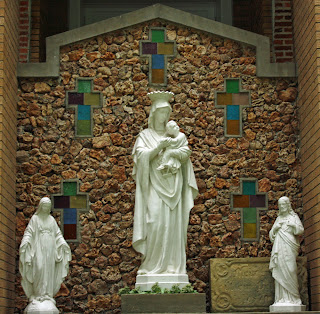 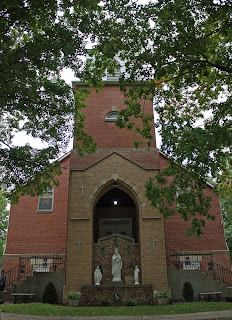 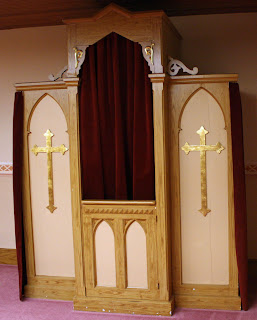 Confessional.
It's the Archdiocese way of encouraging thin priests...
and penitents... 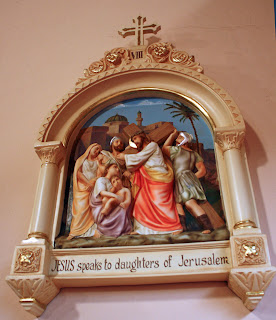 The Eighth Station
Jesus Speaks to the Daughters of Jersualem 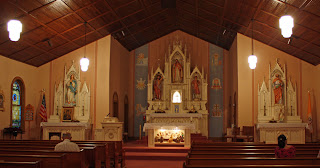 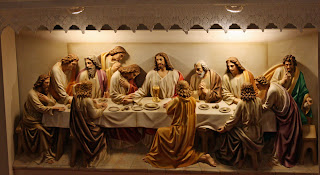 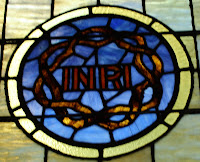 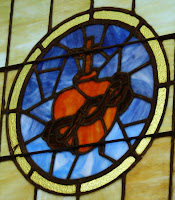 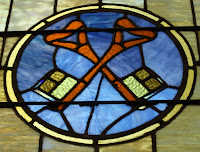 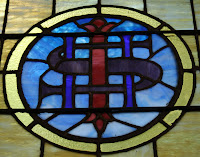 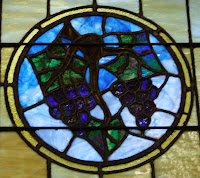 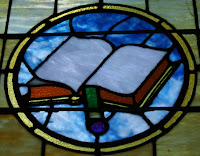 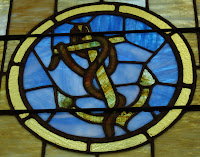 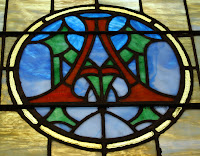 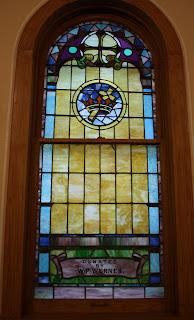 Symbols in the Windows

Links:
Info from the Archdiocese (It's on Route Y.  If you do a Google Search, the Rectory pops up, and the church is a mile or so down the road.  Has the coordinates on my GPS, but I don't know how to get them out!)
Picture from Rome of the West
Posted by Tina aka Snupnjake at 8:50 PM