This morning (9/12/10) I attended the 10 am Mass at Holy Martyrs of Japan - Japan.  I didn't even know we had a Japan in Missouri.  This is one of the parishes on the far edge of the archdiocese.  The parish seems to be in the care of the Passionists.

There was no accompaniment but Father had us sing 2 hymns:
Opening:  Prayer of St. Francis
Closing:  Holy God We Praise Thy Name

Father wore a tan/brown alb like robe that had a hood and slits for pockets.  He wore his green stole with the Passionist emblem on the ends.  Father added a great many words to the Mass in a variety of places.  At the start of the Penitential Rite, Father added a bunch about peace and the gospel of peace.  He said all of the priest's silent or personal prayers out loud.  He also exclaimed "My Lord and My God" at the elevation, which I just saw on Fr. Z's website is not exactly Kosher.  He also added some extra words in the Consecration formula.  I'd have written down what he said, but I took so many notes about the homily, I had no room left.  Father used Eucharistic Prayer II and there were no bells. Oh and Father addressed everyone (but me) at Communion with So and So, receive the Body of Christ.  I'm sure Father does that to feel inclusive, however, since he didn't know my name, I didn't feel very included.

Father's homily started out discussing how the story of the Golden Calf was a rewrite.  According to Father, the golden calf incident didn't happen during the Exodus.  It happened 400-800 years later when Israel split into 2 kingdoms.  Apparently, the Northern Kingdom wanted to build their own Temple because it was bad everyone was leaving town to go to Jerusalem.  When they built their own Temple, it had a golden calf.  (I have spoken to a variety of people....Father seems to be confused...to put it kindly..)

Father's homily then took an abrupt left turn.  When people become angry, they become dangerous.  They burn bridges and say things they don't mean.  We all understand the role of the loving Father.  We struggle in with our humanity.  Many of us relate to the Prodigal Son.  We make mistakes.  We put ourselves in the middle instead of God.  We want to be righteous but we have difficulty with it and are prideful instead.  We tell those that are not WASPs to pull themselves up by their bootstraps because we pulled ourselves up by our bootstraps.  Because I did it.  But the first son does it for a reward, he has anger in his heart and he is cold-hearted.  The Muslims want to build a mosque (uhm it isn't a mosque but go on) at Ground Zero.  The Muslims are watching the Americans on both sides be angry and think we are crazy.  (uhm.  I don't even know where to start with this statement.  I'm going with the obvious...so you can't be Muslim and American?)  Angry people have no good in mind; they just want to vent.  Hitler Youth, KKK, Taliban, and others are all dangerous because they are angry people.  Angry mixed with grief is the worst.  Vindictive people don't do any good.  Anger begets anger.  (So there is no such thing as righteous anger?  So I shouldn't be *angry* that oh I don't know, the Bishops played shuffle the naughty priests around?  What should I be?  Accepting?  Anger, channeled correctly, can lead to good things.  If someone gets rightly angry, they can be motivated to change something...but I guess if it is fueled by anger...that change is bad.  So many people voted for Obama because they were angry and he promised change.  That apparently was bad..Father's right...nothing good does come from anger!!!)  Father then began to talk about stewardship.  Stewardship is a call to share our treasure which is more than our coins.  We have to share our Christ like presence and the social Gospel (uh. social gospel?  uh wut?).  The Bishops' are too concerned with language (direct quote) they need to be more concerned with the social gospel.  (Dude, I'm taking an entire class on analyzing language...after 2 weeks I have learned you can't be too concerned...especially if you want to embed a message in it).  Father ended his homily with a prayer.  During the Prayers of the Faithful, we prayed for the angry people. 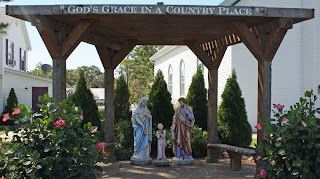 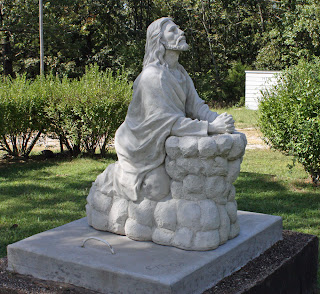 Agony in the Garden
I think this is over a well... 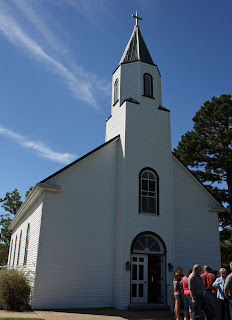 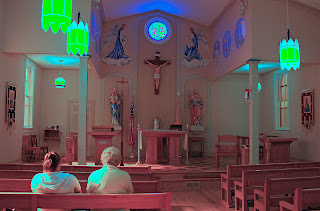 View from the Back Pew
No.  The lights are not really that color.
Between the fluorescent lights and the yellow light from the window,
the camera was flippin out. 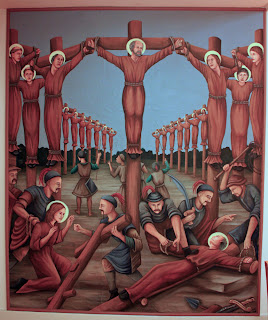 The Holy Martyrs of Japan 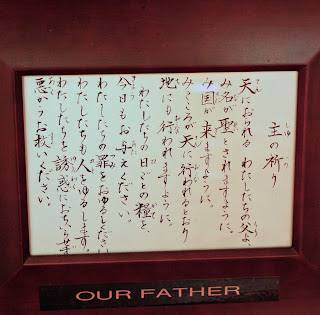 Our Father in Japanese 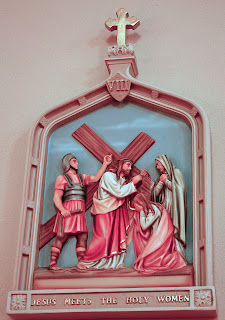 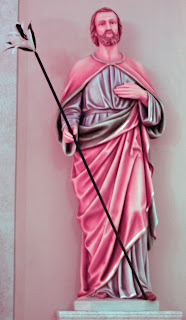 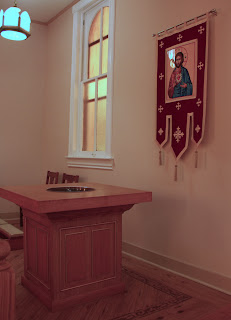 Around the Sanctuary.
I'm hoping the altar is supposed to be a Sacrament in this painting...
otherwise...we seem to be one short... 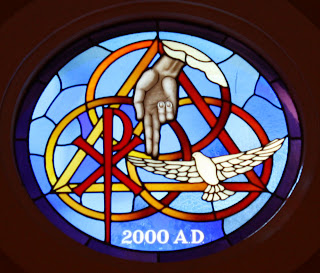 Trinity Window
Links:
Information from the Archdiocese (FYI..the GPS was slightly off again this week!)
Pictures from Rome of the West
Posted by Tina aka Snupnjake at 10:42 PM